As per reports, Liverpool are interested in signing Xherdan Shaqiri, following Stoke City’s relegation from the Premier League last season.

Shaqiri was one of the lone bright spots in an otherwise dismal campaign for the Potters last term. He has a release clause in his Stoke contract – understood to be set at about £12m-£13.5m.

The 26-year-old attacker scored a dramatic winning goal as Switzerland defeated Serbia 2-1 in a World Cup game on Friday. And Shaqiri’s brilliant showing for Switzerland against Serbia could tempt the Reds in making a move for him after the World Cup.

Liverpool have already signed Brazilian midfielder Fabinho from Monaco, while Naby Keita will join up with his new team at Anfield, following his pre-agreed move from RB Leipzig last year. 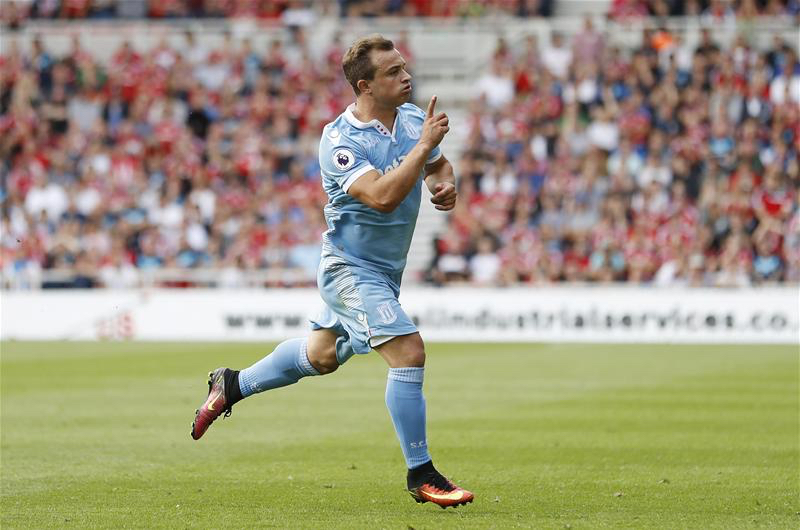 But Jurgen Klopp must seek attacking reinforcements to bolster his squad ahead of the next season. The German tactician needs a player to provide an option in the attack, while also allowing Sadio Mane and Mohamed Salah to rest whenever required in order to maintain their freshness throughout the season. In that case, Shaqiri could be the perfect player for the Reds.

Shaqiri is an attacking powerhouse. He scored eight goals and provided a further seven assists for Stoke last season. He remains keen on leaving Stoke, following their relegation to the Championship.

In the 26-year-old Swiss international, Liverpool would get an established player, who would add some much-needed spark to their attacking options. The attacker boasts a combination of strength, speed and technique which is capable of terrifying the best of defences in the league.

Due to his stocky structure, Shaqiri can’t be easily pushed off the ball. He is nimble-footed and possesses a silky touch which allows him to glide past a defender with utmost ease.

Despite his diminutive stature, Shaqiri possesses great force. He is captivating, direct and industrious but at times he can be frustrating due to his habit of holding onto the ball for long. The former Bayern Munich and Inter Milan man knows exactly what’s required when turning out for an elite European club.

Also, he knows the Premier League very well, having spent three seasons at Stoke, and it could be the all-important factor for Liverpool as the stocky Swiss ace will seamlessly slot into Klopp’s free-flowing team.

Shaqiri is also versatile as he is capable of playing anywhere across the forward line. His pace on the break and guile could give Liverpool a different dimension going forward. The ex-Basel attacker is also richly capable of producing magical moments.

All in all, Shaqiri is a gifted package for Liverpool to unwrap. Klopp needs squad depth, particularly if he is aiming to challenge on multiple fronts next season.

When Switzerland eventually finish their World Cup campaign, it would be sensible of Liverpool to bring him to Anfield.