Why Fulham should hand Kevin McDonald a new contract

Fulham are back in the Premier League and the club have already started their business in the transfer market. The Cottagers have completed deals for Nice midfielder Jean Michael Seri and defender Maxime Le Marchand.

Slavisa Jokanovic will be aiming to make a strong impression in his first Premier League season with the club. The manager is also going to have to clear up some of the stars’ future before the start of the new season.

As a part of this process, Fulham should offer Kevin McDonald a new contract at Craven Cottage. The 29-year-old has established himself as a key member of Slavisa Jokanovic’s squad and played a crucial role in the play-off promotion to the Premier League.

He also has previous Premier League experience with Burnley, as he played for the Clarets from 2008-2011, making a total of 51 appearances for the club, scoring 2 goals in that time.

The midfielder has also played for Dundee United and Sheffield United. He is entering the final year of his current contract but negotiations should be completed as soon as possible. 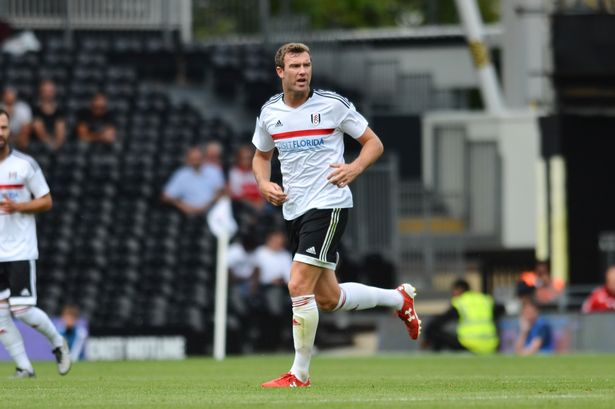 Tom Cairney and Tim Ream have already signed new deals with the club and Mcdonald should be the latest member to be handed one.

He made a total of 45 appearances for the Cottagers last season, scoring 3 goals and providing 1 assist. He also made 1 appearance in the FA Cup. The 29-year-old generally operates as a central midfielder and he’s a very strong defensive powerhouse in the middle of the park.

The midfielder is often praised for backing up his defensive line whenever needed. He is also an accurate passer of the ball, with the midfielder averaging a pass success rate of 85.8% in the Championship last season.

The central midfielder is also very strong in the air and poses a huge aerial threat from set-pieces. He’s also a huge fan of shooting from distance. He was magnificent for the Cottagers throughout the 2017/18 season, with consistent performances.

Read more: Fulham signing this 12 goals, 7 assists attacker could be a real game-changer

Fulham are going to need his services as they embark on a new journey under Slavisa Jokanovic. The club are going to need all hands on deck and they should play the smart move and hand the midfielder a new contract as soon as possible and move on to other matters.

The manager has already made a huge statement of intent by signing Jean Michael Seri and Maxime Le Marchand. Handing Mcdonald a new and fresh contract should see off a successful summer for the club before the start of the new season.