Why holding onto Willian is absolutely vital for Chelsea this season

Chelsea have very much shown their quality in new manager Maurizio Sarri’s first 4 games at the club. The Blues are currently level on points with Liverpool having won all four of their games.

Sarri’s side are playing a high-octane style of football and the club seem to be heading in the right direction. The former Napoli manager not only bolstered the squad in the summer, he also ensured the Blues held onto their top stars.

Though Chelsea were unable to keep hold of Thibaut Courtois, who left the club for Real Madrid. Chelsea did succeed in holding onto Eden Hazard and Willian, two of the top stars at the club.

Willian was linked with Barcelona, who saw three bids get rejected by the Blues. The £120,000-a-week star’s future was thrown into doubt after the Brazilian’s relationship with former manager Antonio Conte drastically deteriorated towards the end of his tenure.

According to Skysports, Willian claimed there was no chance he would stay at the club had Chelsea stuck with Conte for another season. But the 30-year-old now seems more than happy to stay and fight for Chelsea under Maurizio Sarri.

There’s no doubt Willian has been a massive asset for the Blues over the years. The Brazilian has made a total of 170 Premier League appearances since joining from Anzhi Makhachkala in 2013. He has since gone on to score a total of 25 goals and provide 25 assists for the Blues. (Stats Courtesy – Premier League)

Willian has been one of the most consistent and dedicated players at the Stamford Bridge. His work rate on and off the ball has been exceptional, with the Brazilian proving to be one of the main driving forces going forward.

With devastating pace and ability on the ball, it’s not easy to stop Willian in a foot race and even harder to track him down. Willian’s movement on and off the ball is brilliant. He is superb in making runs behind the defence and finding space in tight areas. 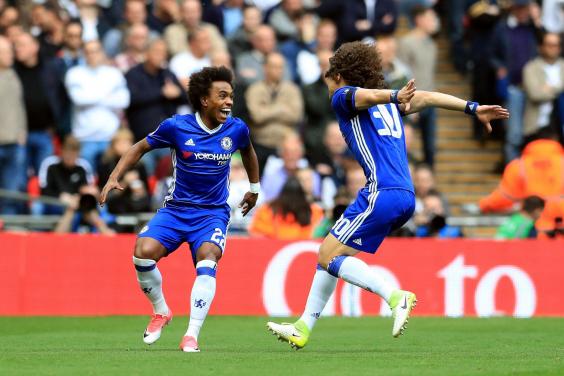 The 30-year-old has also proven to be a gem from set-pieces, with Willian often curling the free-kicks into the top corner. He is also capable of scoring long-range blinders if afforded too much space and time on the ball.

There’s no doubt Willian will continue to thrive for Chelsea at the current rate he’s going. The 30-year-old is like a supercharged battery that never loses its energy. The Brazilian has provided 1 assist in 4 games this season and will be rearing to go out and get more under Sarri.