In their first meeting, this season West Ham suffered a loss against Chelsea. That loss led to a series of bad results that left it touching the relegation zone. But after securing just their third win of the season, Steven Bilic’s men once again face their rivals, Chelsea.

Even though West Ham will find some respite in the fact that they have won two consecutive games, they face an uphill battle against Conte’s men at home. The Hammers hope relies on its fast, athletic attack could do some damage if they are able to catch Chelsea on counterattack and set-pieces.

The Blues on other hand are in-form and had outshone Man Utd in an impressive 4-0 win. Conte has said that despite the importance of this fixture, young players will get a chance. But this will not undermine the pressure surrounding this match. Ever since West Ham has moved to their new stadium there have been quite a few instances of hooliganism. With over 5000 Chelsea filling the stadium tensions will definitely run high.

Cesc Fabregas and Branislav Ivanovic will most probably not feature as they are yet to be fully fit. Defender Kurt Zouma has returned to training but won’t feature in this match. Willian is in contention to start the match after coming on as a substitute against United.

Chelsea fans would be happy to hear that John Terry has recovered from an ankle injury and is ready to start against the Hammers. Midfielder Nathaniel Chalobah also might be in the contention to start as Conte will like to rotate his squad. 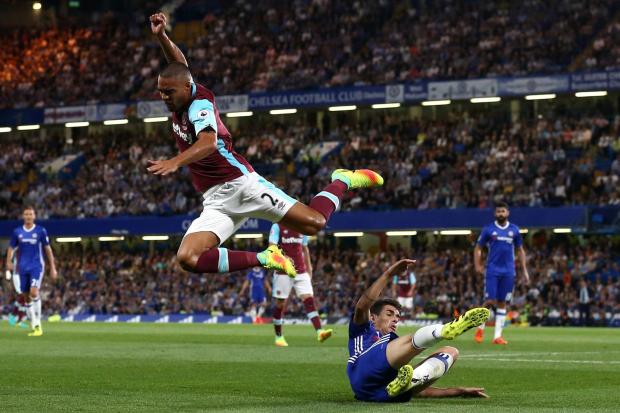 Aaron Cresswell has recovered from a knee injury and should be available for selection. On the other hand, Andre Ayew is yet to achieve full match fitness.

Arthur Masuaku, Diafra Sakho, Gokhan Tore won’t feature as they are out with long term injuries. Andy Caroll also suffered certain setbacks recently and is yet to recover from an ankle issue.

Despite the result of the last match, West Ham should be able to put quite a fight at home. Though it won’t be enough as there does exist a golfing class between these two sides.