West Ham faces a visit to Bournemouth on Saturday as they look to pick up all three points in the Premier League.

The Hammers defeated Manchester United last weekend but suffered a 4-0 embarrassment at the hands of Oxford United in the Carabao Cup on Wednesday.

It was a shocking performance from the east Londoners and Manuel Pellegrini will be desperate to see his boys bounce back at the Vitality Stadium.

Just like West Ham, Bournemouth will be aiming to dust down the disappointment suffered at the hands of Burton in the Carabao Cup.

Manuel Lanzini has missed the last two games with a foot problem and is expected to return in midst of October. Ryan Fredericks has a muscular injury that sidelined him from the midweek Carabao Cup tie, while Michail Antonio has a long-term thigh problem.

Meanwhile, Arthur Masuaku will be available for Saturday’s game after serving his one-game suspension.

Fabianski is West Ham’s undisputed no.1 and will start the game against Bournemouth.

With Fredericks suffering from a muscular injury, Zabaleta will start at right-back for the Hammers.

Diop was fantastic against Manchester United and is one of the first names on Pellegrini’s team-sheet.

Ogbonna will continue partnering Diop at the heart of West Ham defence.

Cresswell was excellent against Manchester United, scoring a superb free-kick at the London stadium. He’ll start ahead of Masuaku at left-back.

One of the most important players for the Hammers, Rice is a certain starter at Bournemouth.

Noble is an experienced player and the skipper of the side. He’ll continue partnering Rice in central midfield.

With Lanzini out injured, Fornals will look to make the most of the opportunity to cement his place in the team.

The Brazilian is a definite starter and will have to be at his best against the Cherries.

Haller has impressed with his hold-up play and movement in the box. He’ll lead West Ham’s attack at the Vitality Stadium. 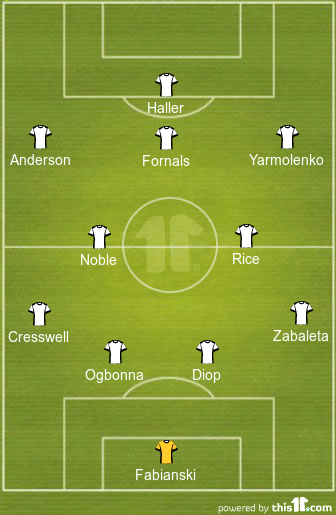