According to a report from the Stoke Sentinel, West Ham United are set to battle it out with fellow Premier League side Watford for the signature of Stoke City’s Joe Allen.

The Hammers had a £25million bid for the former Liverpool star rejected back in January 2018 but the report reveals that they are back in the hunt for him this summer.

Allen has been ever-present for Stoke City, having played every minute of every game bar one, so far this season in the Championship. The Welshman has 6 goals and 3 assists to his name so far, having featured across all the central midfield positions this campaign.

Allen has been a wonderful servant for the Potters since making the move, having played 120 games for the club, both in the Premier League and in the Championship. 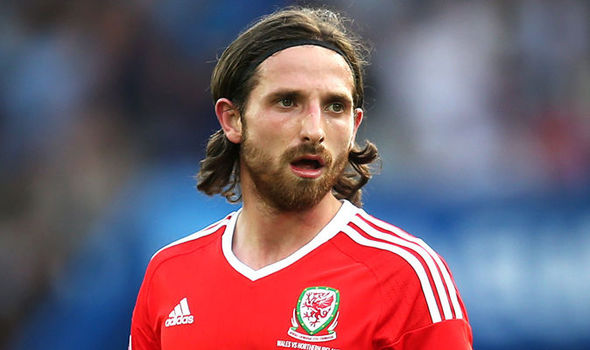 However, the 29-year old’s quality is more than good enough for the Premier League and West Ham should beat Watford for his signature in the summer.

The Hammers are at a huge risk of losing their star midfielder Declan Rice, with both Manchester United and Manchester City furiously chasing after the 20-year-old in the summer.

Edimilson Fernandes, who is on loan at Fiorentina, could sign for them permanently due to an option in the deal for about €7million.

With Jack Wilshere’s injury woes and Pedro Obiang’s inconsistency, West Ham could really do with a top-quality midfielder and Joe Allen fits the bill perfectly.

The Welsh international knows everything there is to know at the Premier League, having played close to 200 games for three different clubs, including Liverpool.

Allen could form a solid midfield partnership with fellow veteran Mark Noble. The duo’s experience and leadership would push West Ham to new heights in the coming seasons, in both the Premier League and potentially in Europe. Allen’s versatility is also a huge factor in his game and this trait will allow Manuel Pellegrini to tweak his formation, depending upon their opposition.

A midfield trio of Obiang, Noble, and Allen would be incredibly hard for teams to break down and West Ham would benefit massively with his signing in the summer.

West Ham United can soften the blow of Declan Rice’s potential departure by signing Joe Allen. His quality and experience will allow him to fit in comfortably and he would be a real leader in the Hammers’ ranks for the seasons to come.