Tottenham’s unbeaten run in their new home came to an end at the hands of a brilliant West Ham side in the London Derby on Saturday. Mikhail Antonio’s second-half strike gave the visitors all three points.

The visitors started off brightly after a good run by Felipe Anderson on the left flank whose cross fell to Snodgrass and his shot bounced back into the path of Declan Rice, whose fierce strike went inches over the bar.

The Hammers looked up for the cause as they went toe to toe with Spurs in the early exchanges. Tottenham’s first chance of the game fell to Son Heung-min, whose low left-footed drive was well saved by Fabianski. 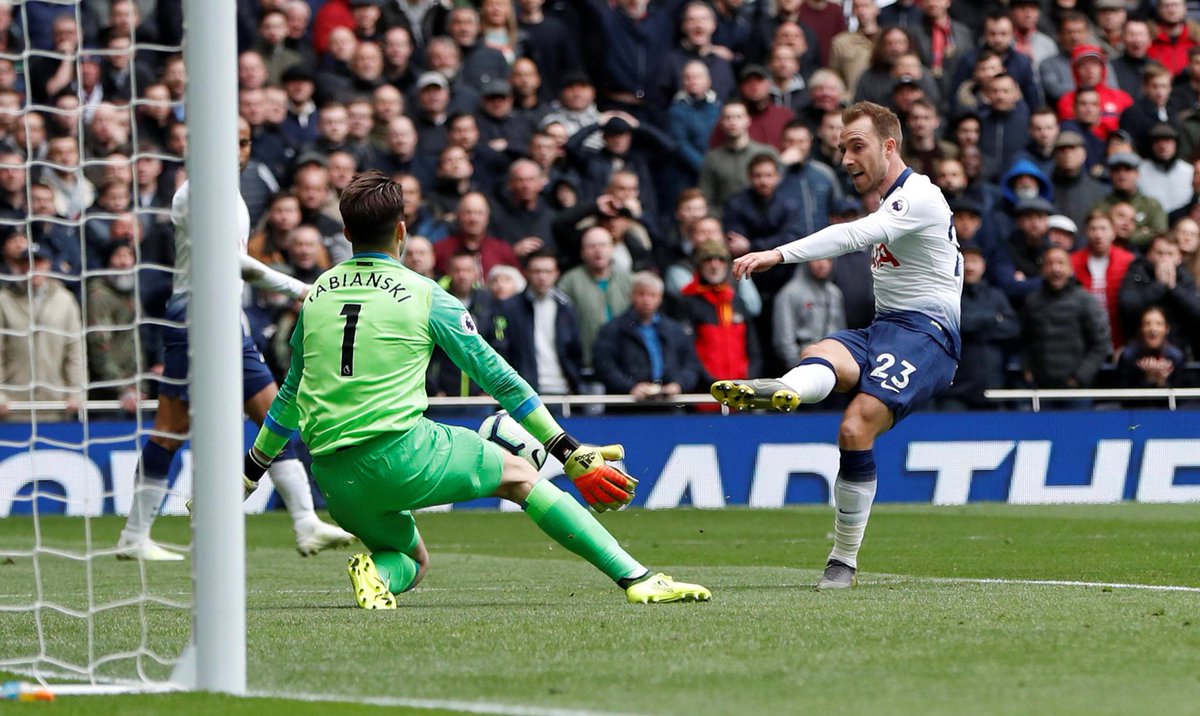 Deli Alli was the next player to cause some trouble but his shot was blocked by Balbuena as Spurs looked to take control of the game. Ryan Fredericks had a pop at goal from a long way out but Lloris tipped it wide to a corner.

Felipe Anderson got in behind yet again after a wonderful exchange with Noble but the Brazilian failed to get his head up to find Arnautovic in the middle and had a weak shot instead.

Danny Rose got himself regularly involved on the left flank but his end product was abysmal, to say the least. Lucas Moura was given some space on the edge of the box and his super strike narrowly missed the goal. 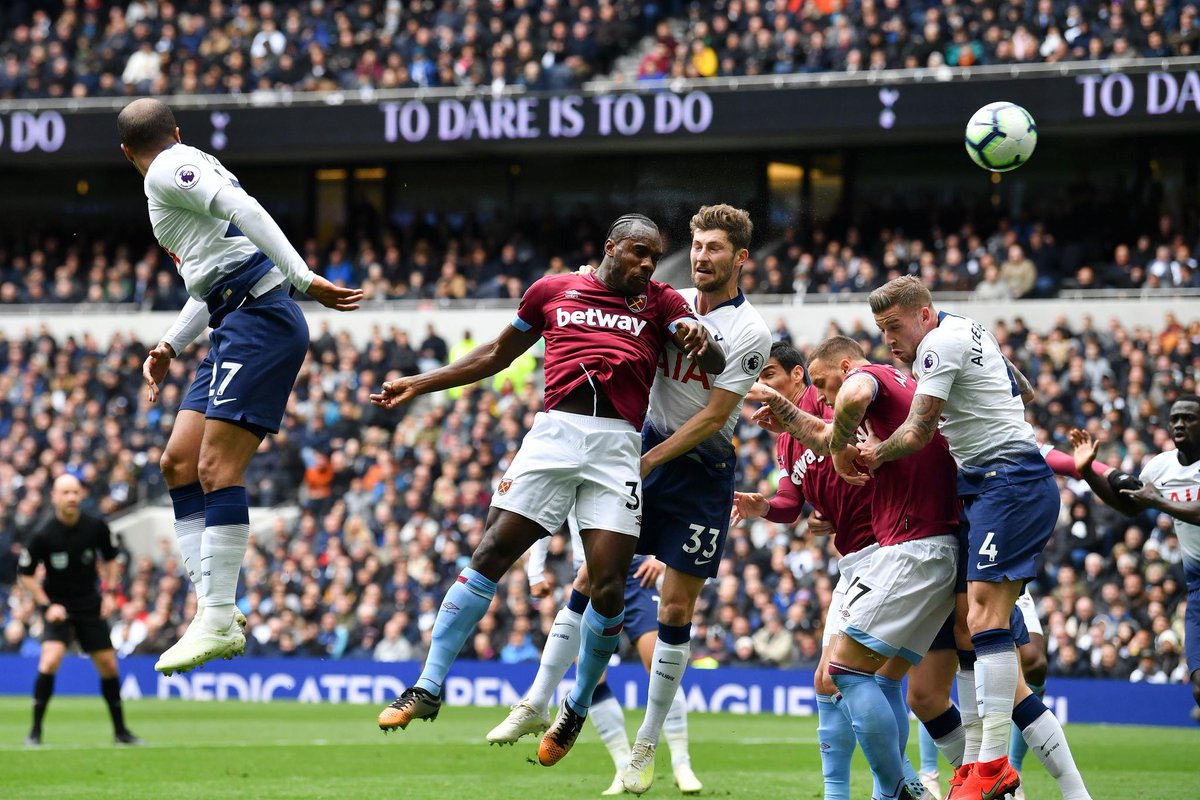 Robert Snodgrass was the first player to be booked after a sliding tackle on Lucas Moura. The game looked very even at the half-hour mark, with both teams going for it.

The biggest chance of the half fell to Christian Eriksen after Diop’s clearance was blocked by Son. The ball fell into the path of the Dane, whose shot was saved well by Fabianski.

The final chance of the half fell to Anderson, whose long-range strike took a deflection off of Alderweireld, but Lloris changed direction quickly to make a good save. 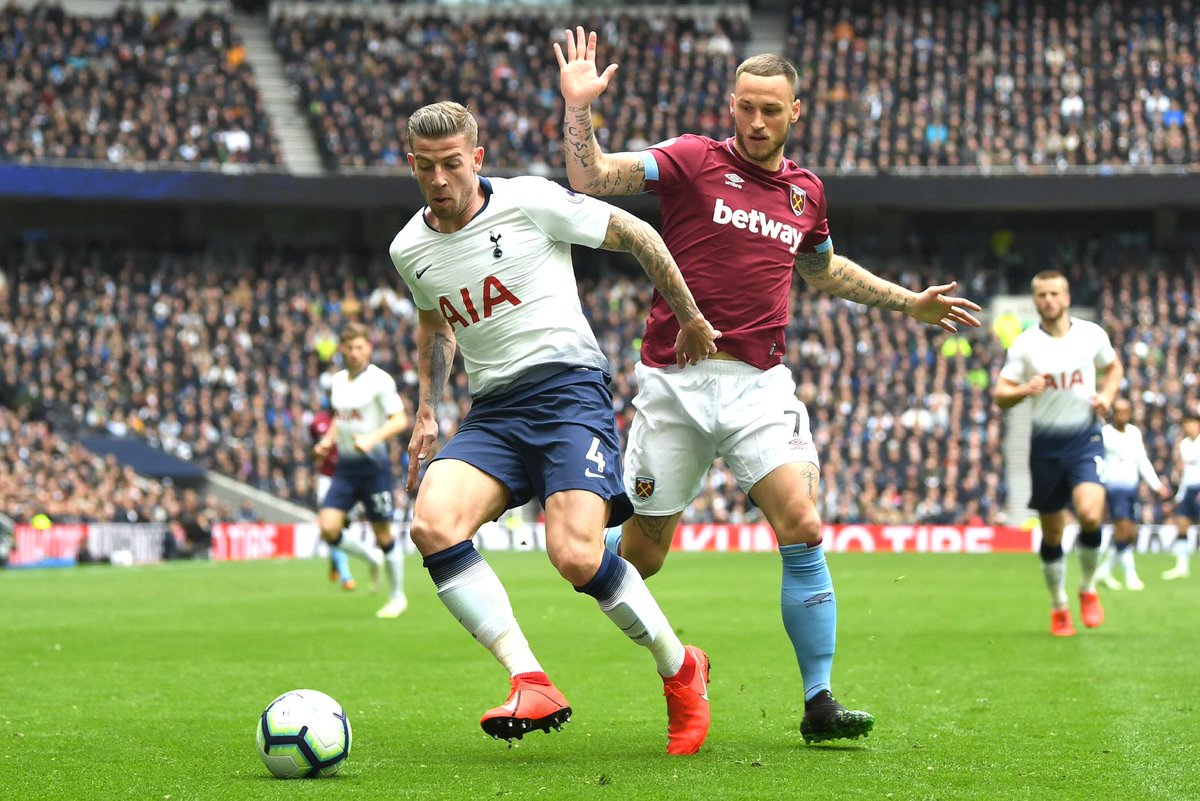 Both teams went in at the break 0-0 and Manuel Pellegrini would have been impressed by his side’s display.

The Hammers started off the second-half well after a brilliant ball from skipper Mark Noble set Arnautovic free and the Austrian passed the ball into the path of Fredericks, whose shot was deflected off for a corner.

Arnautovic brilliantly brought down a long ball from Fabianksi and his turn took two Tottenham players out of the game but his shot went straight at Lloris.

Massive shouts for a penalty was waved away by Anthony Taylor after Son looked to have been impeded by Masuaku inside the box. A huge let-off for the visitors there as Spurs started to take control of the game. 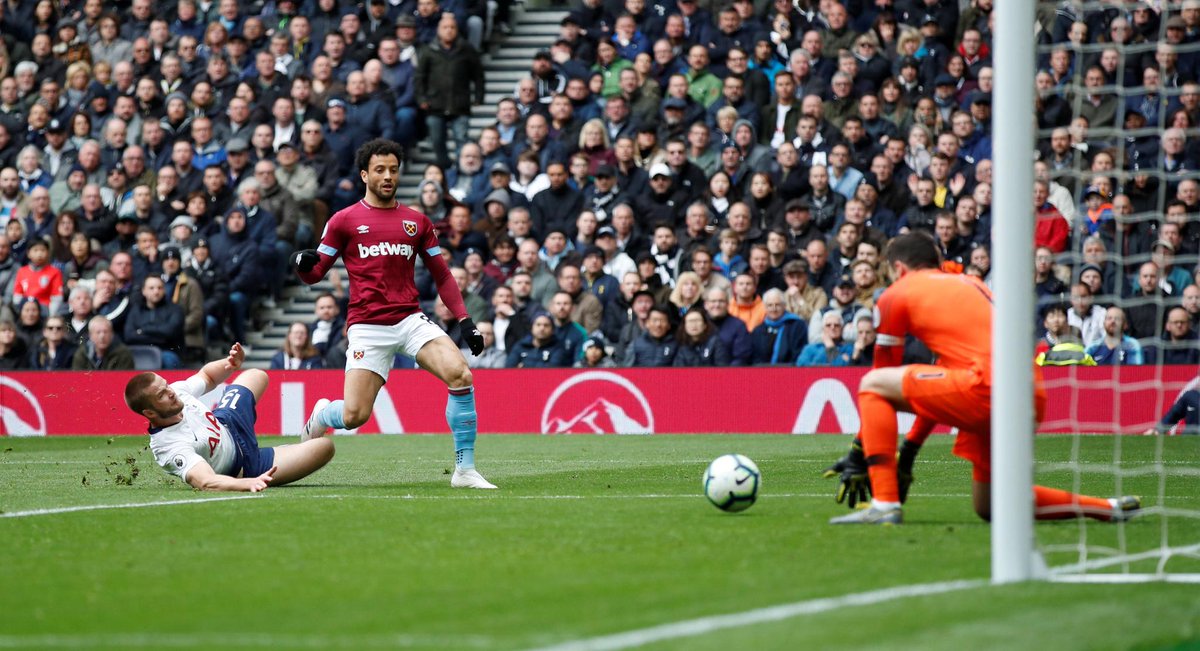 Tottenham’s good run of possession failed to cause any damage to the Hammers, which prompted Pochettino to bring on Llorente in place of Moura in the 65th minute.

However, West Ham deservedly took the lead a minute later after Arnautovic’s brilliant ball into the box was brought down by Antonio and his strike flew past Lloris into the back of the net.

That was the first goal that Spurs had conceded in their new ground and what a way for Antonio to give his side the lead. West Ham sat back for the next few minutes as Tottenham looked for a leveller. 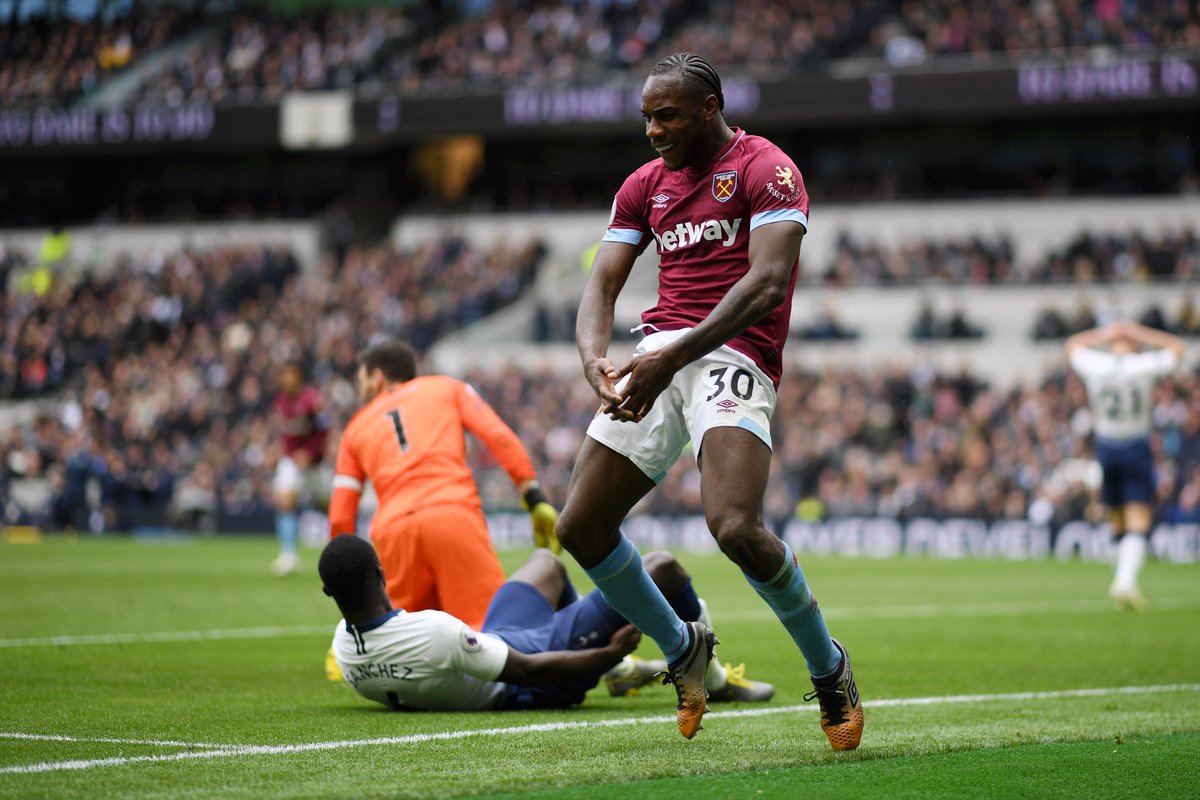 A fantastic run of passes saw Davies through on goal but his shot was blocked brilliantly by Fredericks, who was having an outstanding game for West Ham.

Vincent Janssen replaced Danny Rose for the last 15 minutes as West Ham threw on Pedro Obiang in place of Snodgrass to seal their lead. After a good run of possession in Spurs’ half, Marco Arnautovic tried a curler but Lloris held on well.

The Austrian did some damage to himself in attempting the shot and was replaced by former Arsenal man Lucas Perez, who was naturally welcomed with boos. 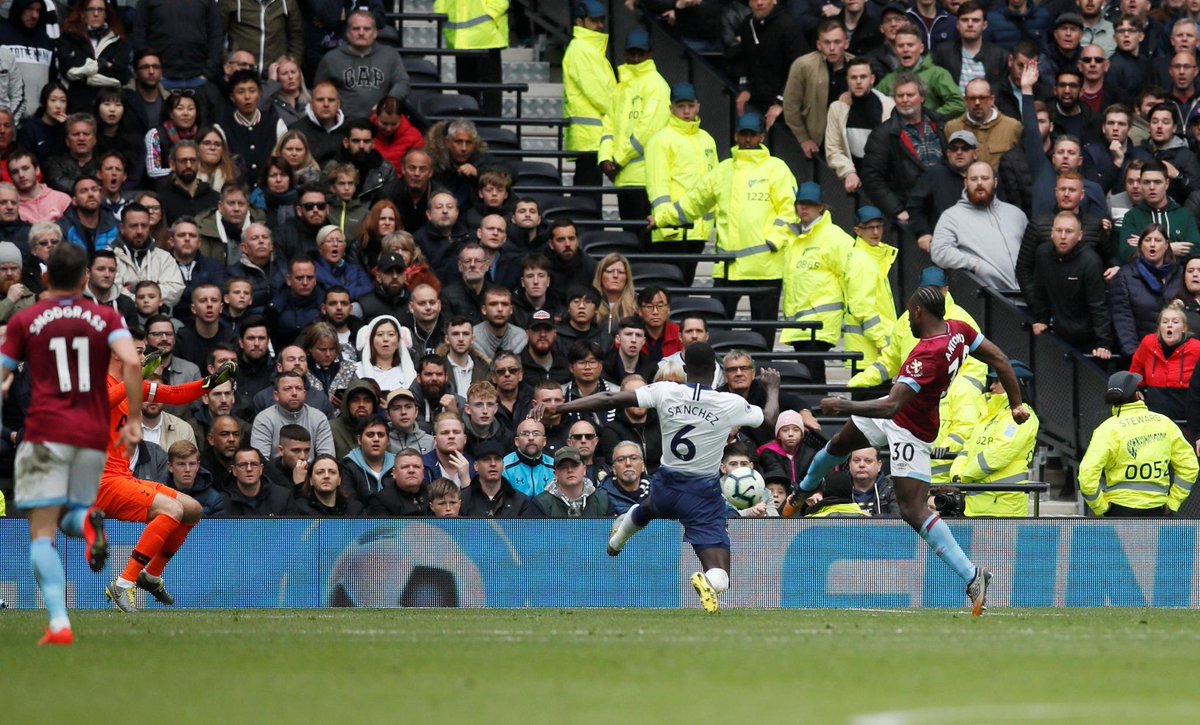 Spurs failed to deal with a long ball and Antonio galloped ahead of Davies to have a strike which was saved by Lloris. Dele Alli’s cross at the other end almost found Llorente but his header went wide.

That turned out be Alli’s last contribution to the game as he was replaced by Wanyama. Pellegrini brought on Ogbonna in place of Mark Noble, who was one of the best players on the pitch for West Ham.

Issa Diop made a fabulous run from his own half into the box but his shot was tipped away for a corner by Lloris. Balbuena’s clearance bounced off of a Spurs player and Llorente was the quickest to get himself onto the ball but his cross went past the 6-yard box without any attackers nearby. 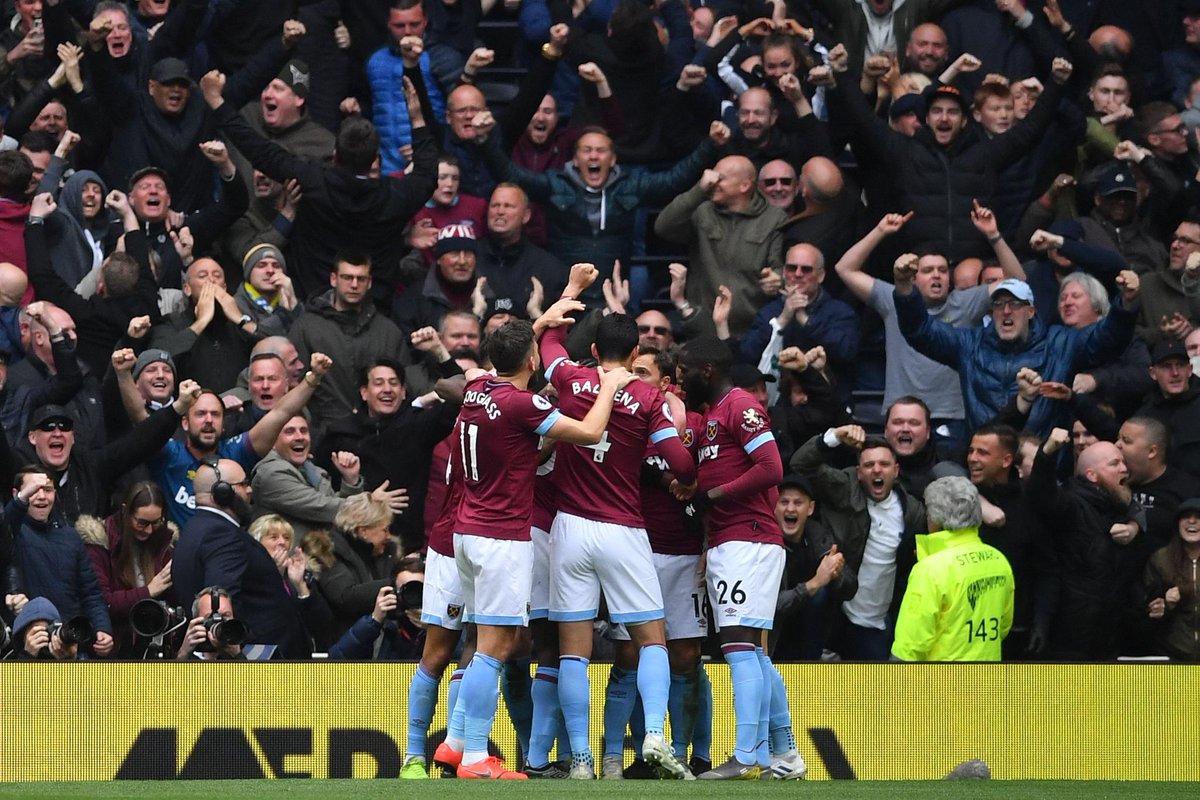 Four minutes were added on at the end of the 90 minutes but West Ham’s tweak in formation completely nullified Tottenham’s attack. Vincent Janssen had a golden chance to level the game with seconds to spare but his header was cleared off the line by Balbuena.

West Ham deservedly took home all three points and here’s how the Hammers fans reacted to the outstanding victory: