Championship football resumes at the weekend as West Brom travel to the Riverside Stadium to face Middlesbrough.

The Baggies lead the way in the Championship after a fine start to life under Slaven Bilic. They are the team to beat right now in the second tier and Bilic will feel as though automatic promotion is a real possibility. The Baggies are on fire and deserve to be on top.

West Brom’s opponents on Saturday, Middlesbrough, have not had an ideal start to the season under Jonathan Woodgate and have lost three of their last four games.

Ahmed Hegazi has returned to full fitness, playing 90 minutes and recording a clean sheet as Egypt beat Botswana 1-0 in an international friendly.

Grady Diangana felt his Achilles in the 4-2 victory over Cardiff City before the international break but it isn’t serious and he’ll be ready to face Middlesbrough. Meanwhile, Chris Brunt and Matt Phillips could be available for Saturday’s game as well.

Johnstone is West Brom’s undisputed No.1 and should start in goal against Middlesbrough.

Furlong has impressed of late, showing his quality to move forward from right-back. He is expected to retain his place in the team.

Strong in the air and robust in the challenge, Ajayi will have a task cut out against Middlesbrough’s attackers at the weekend.

Even though Hegazi is now fully fit, Bilic is unlikely to disturb the centre-back pairing and should go with Bartley at the Riverside Stadium.

Nathan Ferguson has come up by leaps and bounds since the opening day victory over Nottingham Forest. He is one of the most important players in Bilic’s set-up at the moment.

Livermore will look to control the tempo of the game from the first blow of the whistle.

Sawyers is an industrious and clever player who loves to arrive late in the box and score goals. He should partner Livermore in the Albions’ central midfield.

Phillips is expected to be ready to face Boro on Saturday. He has been in good form this season and will look to help the Baggies achieve all three points.

Pereira is rapidly becoming a fan-favourite at the Hawthorns, with the Brazilian showing his class consistently. He is an exciting player and his goals and assists have contributed to the fact that West Brom are currently on top of the table.

On loan from West Ham, Diangana is certainly benefiting from regular starts and he’s looking a class above in the Championship right now.

Austin scored his first goal of the season in the 4-2 victory over Cardiff last time out, which would have given him a lot of confidence. He’ll lead the attack against Middlesbrough. 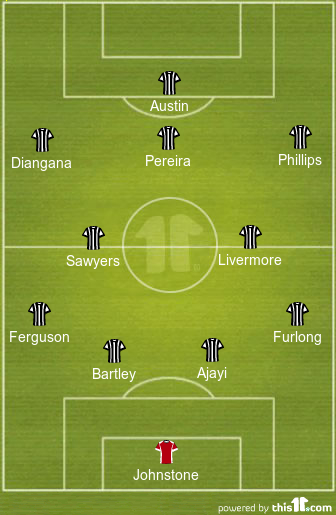