West Brom welcome Brentford to the Hawthorns on Saturday hoping to retain their place at the top of the Championship table.

The Baggies gave a testament to their title credentials with a fantastic battling performance against Birmingham City at the weekend, winning the game 3-2. The busy Christmas schedule is now on the horizon for Slaven Bilic and his players, approaching Saturday’s first test against Brentford.

Brentford, meanwhile, arrive in West Midlands as one of the most in-form teams in the league and will offer West Brom a stern test on Saturday.

Kieran Gibbs is set to miss the weekend’s game through injury but remains hopeful of being available for West Brom’s trip to Barnsley on Boxing Day.

Johnstone has been in good form this season and should keep his place in goal.

Furlong came on as a second-half substitute in the 3-2 victory over Birmingham City but he should start the game on Saturday.

Bartley has been one of the best players for the Baggies this season and is a certainty to start against Brentford.

Ajayi has formed a strong partnership with Bartley at the back.

Ferguson has been a standout performer at the Hawthorns in what has been his breakthrough campaign so far. He should start at left-back.

Livermore brings stability to the midfield and allows the creative players to express themselves more. He should start against the Bees.

Phillips has been a vital cog in West Brom’s attack, adding a lot of pace and energy.

Pereira has been a revelation since he arrived at the Hawthorns, playing a key role in West Brom’s excellent start to the campaign under Slaven Bilic – scoring five goals and providing ten assists in 20 league appearances.

Diangana, who is on loan from West Ham, is one of the most skilful and exciting players in the Championship and has already become a firm fan-favourite at the Hawthorns. He’ll keep his place on the left flank.

Austin came off the bench last weekend and scored a brace to win the game from West Brom against Birmingham City. He’ll likely get the nod ahead of Robson-Kanu in the No.9 role. 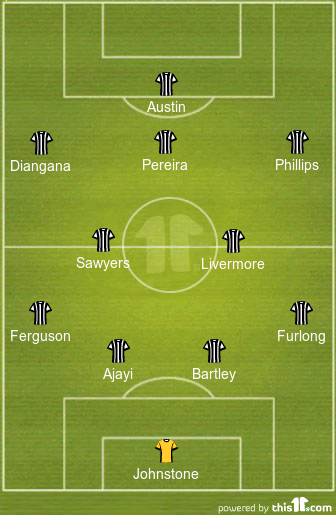