Middlesbrough dropped crucial points once again as they were beaten 2-1 by Queens Park Rangers at Loftus Road on Saturday.

Pawel Wszolek and Nahki Wells scored for QPR that belied their bottom-half status on a pouring day at West London. Middlesbrough did show spirit to equalize through George Saville but Tony Pulis’ men didn’t have enough in their armory to clinch a point.

And Middlesbrough started on the back foot at Loftus Road and were lucky to not go 1-0 down when a right-wing cross was swept in low that only lacked a QPR player in the box to tap in. But the visitors weren’t second time lucky as another delivery across the box saw QPR take the lead.

Jake Bidwell delivered a cross from the left and Pawel Wszolek turned in from close range despite Darren Randolph trying his level best to stop. It was just minutes on the clock and the traveling Boro fans were left stunned.

But Boro responded well, launching attacks after attacks to get the equalizer. Saville saw his shot deflect just over the bar and Jordan Hugill failed to get past Tony Leistner after being sent through on goal from a well-weighted ball over the top by Stewart Downing. 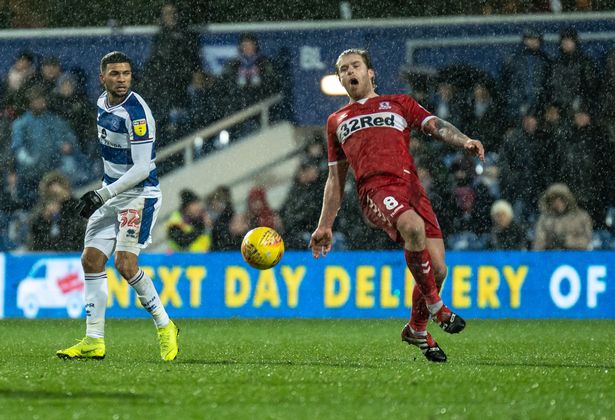 Six minutes into the second half, Middlesbrough made it 1-1. Ryan Shotton crossed from the left and the ball was headed back out of the box by a QPR player and Saville hit a fantastic first-time left-footed volley from near the edge of the penalty area into the back of the net.

Parity lasted less than 10 minutes with Boro caught napping in the box. Wszolek found space on the right and pulled the ball back to Wells, who cleverly turned away from Saville and then belted home a powerful shot past the helpless Randolph.

Tony Pulis threw Ashley Fletcher in the 82nd minute as Boro searched for the equalizer. As Boro threw men forward in numbers, they were caught on the break once but Wszolek couldn’t keep his shot on target.

At the other end of the pitch, Fletcher was in a decent position to test the QPR keeper to the left of the goal but the substitute’s effort was blocked by Furlong as Boro dropped points on a crazy rainy day at West London.

Read more: Middlesbrough splashing £6m on this loan star would be a total waste and they must avoid it at all costs

Hugely disappointed with the 2-1 loss at QPR, here’s how some fans reacted on Twitter.

Poor once again. What is it exactly Pulis is trying to build at this club? As far as I can see it’s a toxic atmosphere intended on dividing fans. We’re going backwards not forwards!

Sack Pulis and get Jokanovic pls

Pulis out, get a manager in who wants to play football, give him some money to spend and get the crowds back

A shake up needed in January surely! Including a new manager imo, one who lets the team play to win, since our defence is no longer impenetrable, we need to be faster on the break and clinical at finishing. But what do I know 🤔

Pulis out enough is enough

The football the past few months has been shocking, sideways nothing balls and hit and hopes. Pretty grim stuff

One shot on target all game. Story of our season there.