On Monday, Liverpool announced the signing of Fabinho from AS Monaco. The Brazilian has arrived for £39m and became Liverpool’s second signing of the summer transfer window, with Naby Keita having already been signed for £52.75m.

Highly versatile, Fabinho is a strong defensive midfielder capable of playing in central defence and also as a full-back. The 24-year-old was one of the stars in Monaco’s famous 2016/17 title-winning campaign.

Jurgen Klopp has made a strong start to the summer transfer window by signing Fabinho and while he would still be keen to add more players to strengthen his squad, the German will finally acquire the services of Naby Keita in July.

Keita is an all-action midfielder capable of dominating the middle of the park with his passing and crossing abilities. The Guinea international has been an influential player in Leipzig’s rise in Europe in the last couple of years.

A defensive midfielder in Fabinho and a midfield enforcer in Keita, Klopp has made a statement of intent that he is ready to go all guns blazing to challenge Manchester City next season.

Just like Klopp’s Liverpool, Jose Mourinho’s Manchester United will also be raring to go and challenge City for the title. While Mourinho is yet to sign a player in the transfer window, he has good quality in the midfield despite Michael Carrick’s retirement and Marouane Fellaini’s reluctance to extend his contract.

United have two strong midfielders in Paul Pogba and Nemanja Matic – the two pillars who have endured contrasting seasons. While Matic has enjoyed a fantastic debut season at Old Trafford, Pogba has blown hot and cold.

Without further ado, let us have a statistical comparison between Matic-Pogba and Fabinho-Keita as to which club will have a stronger midfield next season. 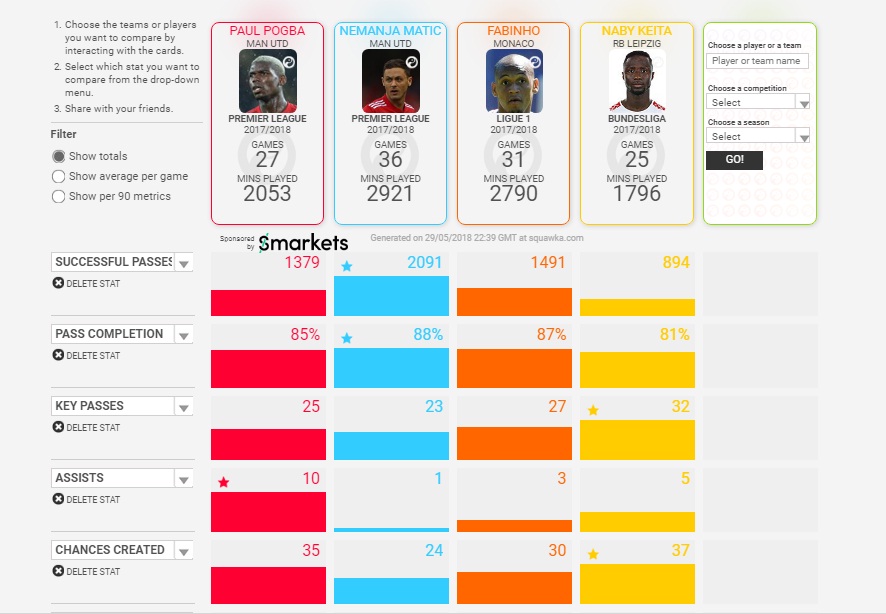 After a steady first campaign back at Old Trafford, there is no doubting that Pogba has improved immensely this time around. The only problem has been his consistency. Matic, on the other hand, has done the defensive shielding to great effect – the job for which Mourinho signed him from Chelsea.

When it comes to successful passes, Pogba and Matic have made a combined 3470 passes. While Fabinho and Keita are yet to play together at Liverpool, their joint passes sum up to 2385. Also, Pogba and Matic enjoy a better pass completion rate – 85% and 88% respectively; Fabinho has 87% and Keita has 81%.

While the Matic-Pogba partnership has been better in ball retention and recycling, they are not too effective as compared to Fabinho and Keita when it comes to key passes and creating chances.

In terms of key passes made, Fabinho and Keita combine together for 59 passes, in contrast to Pogba-Matic’s 48. Furthermore, the former has created 67 chances together, while the latter has only 59 to brag about.

Keeping the mini statistics in mind, it is difficult to make a direct comparison. While Matic and Pogba have played together for United, Fabinho and Keita are yet to unite but have impressive individual statistics.

It is often tough for a player to come from a different league and get accustomed to the demands of the Premier League very quickly. Thus, it might prove to be a bit difficult for Fabinho and Keita but with time, they can adapt to the Premier League and form a formidable partnership at Liverpool.

That said, the combination of power and solidity of Fabinho and the creativity and dynamism of Keita provide promising signs for the Reds. That doesn’t mean Matic and Pogba are far behind. They are two jewels in Mourinho’s team who are capable of bossing the game and providing moments of brilliance when needed.

The summer transfer window has just started and while a lot of dealings are to be done for both Liverpool and United, looking at the current scheme of things, Klopp’s midfield is better balanced than Mourinho’s midfield.