According to a report from the Watford Observer, Lille boss Christophe Galtier has expressed his interest to sign Watford’s Dodi Lukebakio in the summer.

The report reveals that Olympique Lyon and Schalke are also keen on a move for him after his fantastic season in the Bundesliga.

Watford have had immense success with Gerard Deulofeu and Roberto Pereyra on either wing this campaign but reports have emerged that the Argentine could leave the club to return to the Serie A with Torino interested in him.

Losing Pereyra would be a huge blow for the Hornets, especially after how big a part he has had under Javi Gracia’s side over the last two years. However, Pereyra’s exit could open up the door for the youngsters in their squad and one player who deserves a chance is Dodi Lukebakio. 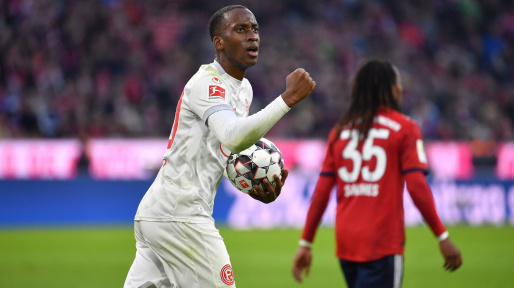 The Belgian spent the season on loan at Bundesliga side Dusseldorf for whom he was a star this campaign. Lukebakio scored an impressive 14 goals and provided 5 assists for the Bundesliga outfit this season and played a key part in helping the club finish in 10th place.

A highly versatile player, Lukebakio has been used everywhere across the front three by Fortuna this season. However, the Belgian’s best position is up front as a centre forward from where he has scored most of his goals.

Troy Deeney is ageing which will potentially play a factor in his performances in the coming years.

Lukebakio could be a perfect replacement for the Watford skipper when he decides to move on but until then he can play a huge part on the wings.

Keeping Lukebakio will also open up the option for Javi Gracia to play him alongside Deeney next season which would be a deadly strike partnership. The 21-year-old has all the qualities to be a star in the Premier League and Watford will be making a huge mistake if they let him go in the summer.

He possesses brilliant pace and exceptional dribbling skills, which has helped him excel in the wider areas.

Lukebakio is a very clinical finisher from close range and from distance. His heading is fantastic and Watford should make full use of this next season.

Dodi Lukebakio has a huge future ahead of him and Watford should and must give him a chance at Vicarage Road next season.

The Belgian would be a perfect long-term replacement for Deeney and at 21 years of age, he can lead Watford’s line for the next decade.