If there is anything that Watford need at the moment, it’s a right-back. Mundo Deportivo has revealed that they’re among the many sides interested in Atletico Minero star Emerson.

The Hornets have had severe injury issues over the last few weeks, with Will Hughes, Abdoulaye Doucoure, Craig Cathcart and even Sebastian Prodl all out for a considerable amount of time.

This has been down to injuries and Kiko Femina’s rise in form and things could change now that the 27-year-old has been ruled out for the next few weeks. That’s exactly why the club need Emerson. The Brazilian might be just 20 but he could be a vital addition to Gracia’s squad in the near future. 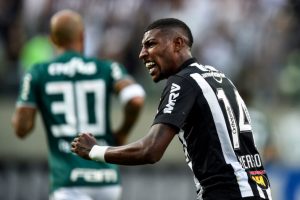 The Atletico Minero star has been in fine form this season and has already won five caps for the Brazil national side under Tite. This not only shows how highly he is rated but also the right-back’s maturity beyond his years. However, all that combined with the fact that Emerson only made his debut a little over seven months ago, certainly shows his rise.

For the Hornets, however, the fact that their main right-backs are all 27 and over, with the exception of Navarro, a move does make sense. But things could get complicated as the Hornets are not the only side interested in the 20-year-old right-back.

Liverpool, Arsenal and Chelsea are also in the race, and with Atletico Minero’s financial difficulties of late, things could get interested. Watford and Javi Gracia need to make a move asap if they really want the 20-year-old right-back.

Read More: A perfect backup for Pereyra – This 8-goal Ligue 1 hotshot would be a terrific signing for Watford

The January window has less than a week left before it slams shut, thus any move needs to be made soon and given Arsenal’s injury concerns, Watford need to out-race the Gunners. Arsenal manager Unai Emery’s main right-back Hector Bellerin has been ruled out for at least six months, which means that replacements need to be found.

While there will be concerns as to whether or not Emerson can adjust to the Premier League’s high octane and physical football, Watford should simply look back on history and the profits they made of another Brazilian youngster in Richarlison.