Chelsea claimed all three points with a comfortable 2-1 victory over Brighton and Hove Albion at the Amex Stadium on Sunday, thanks to first-half strikes from Pedro and Eden Hazard.

The visitors showed more intent and caught the game by the scruff of the neck right from the kick-off. Eden Hazard created the breakthrough after David Luiz’s free-kick and Marcos Alonso’s close-range effort were saved by goalkeeper Matt Ryan.

The Belgian drove through the Brighton defence and lit up the scene with an intelligent pass to pick out the run of Pedro at the far post who put the Blues in the driver’s seat with the simplest of tap-ins.

Chelsea continued to threaten and chances were few and far between for the Seagulls. Solly March found some space and called Kepa Arrizabalaga into action with a powerful long-range effort but that didn’t cause the Spaniard any major headaches. 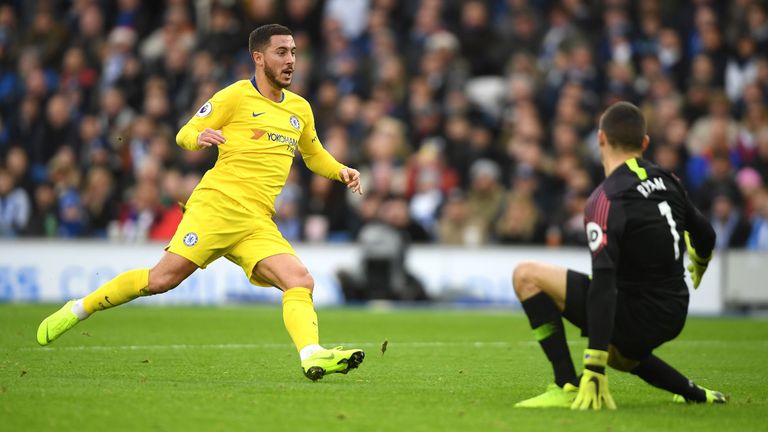 However, the pressure from Chelsea was absolutely relentless and Eden Hazard once again made the home side pay for just the slightest of mistakes. Leon Balogun’s attempted pass was intercepted by Willian who set Hazard free with a delightful pass and the Belgian literally outpaced three Brighton defenders in a ridiculous manner to guide the ball past a rather helpless Matt Ryan.

It could have been 3-0 for the Blues before halftime but Antonio Rudiger fired his header tantalisingly wide of the post from a corner.

Brighton saw more of the ball in the second half and created a few chances. However, Chelsea could have had a third goal when Marcos Alonso’s thunderous effort from about 20 yards shook the frame of the goal. Read More: Chelsea simply cannot afford to lose their rising young English star if they are to challenge for the title next season – agreed?

Solly March took advantage of some sloppy defending by David Luiz to pull one back for Chris Hughton’s side in the 66th-minute but the Seagulls couldn’t manage to breach Chelsea’s defence for the second time.

The victory means that Chelsea remain 4th in the standings, eight points behind leaders Liverpool, and the Blues have a tricky fixture coming up against Bournemouth in the Carabao Cup on Wednesday night.

Here’s how the Chelsea fans reacted to the 2-1 away win:

+ Another win/3 points.
+ The ’False 9’ works once again. Keep with it until a proven CF comes in.
+ Good resiliency shown in an away performance after Wolves. Solid display.
+ Great match once again for a certain Belgian called Eden Hazard. #BRICHE #CFC pic.twitter.com/XWNUK6FxwQ

#Chelsea ‘s second goal : you can expect an opponent’s error or you can create it [ produce situations/traps that can cause error(opponent’s) ]#BRICHE pic.twitter.com/O40UY0VUPI

A little close for comfort, but overall good team performance and all 3 points taken on the road. Up the Chels! #BRICHE @NorthFLBlues

What does Emerson has to do to start ahead of Alonso…or what else Alonso has to do to get dropped…very sloppy at defence and gave away ball possession too many times..was lucky to be on pitch for 90 mins..#BRICHE #Chelsea

Our performance in 2nd wasn’t better than 1st half. Without both Hazard and Pedro we’re so poor at front. Alonso must improve in defence he’s so poor. Happy for 3 points tho.#BRICHE @ChelseaFC

Myb I expect too much from @ChelseaFC bt we have to improve n a lot of areas. Atleast we won #BRICHE

Should never have ended out the match that way, very nervy 15 Minutes towards the end. We are nowhere near being there yet, as expected, & still struggling to kill Games off. 3 Points & a Big Win.. I’ll take that! UTC💙 #BRICHE