Celtic completed the domestic treble after a hard-fought 2-1 victory over Hearts in the final of the Scottish Cup. The Hoops came from behind to pick up the win, thanks to a brace from Odsonne Edouard in the second half.

Hearts started off the game well despite the terrible weather as they worked the ball slowly on the wet turf but an attempted cross from the left flank hit Steven MacLean and went behind.

The Hoops earned the first corner of the game after Hayes brilliantly got away from Haring before finding Smith on the outside but his low cross was cleared behind.

Hearts looked calm and composed on the ball and waited patiently before going on the attack but Craig Levein’s side looked a little short on confidence after last weekend’s defeat.

Djoum got himself in a crossing position from the byline but his ball was cleared well by Simunovic before it even reached the six-yard box. Hearts got into the game well and enjoyed possession in Celtic’s half.

Hickey tried his luck from about 25 yards out but the shot lacked power and was easily dealt with by Bain. The Hoops had the first real chance of the game after Djoum gave the ball away in the attack and Rogic fed Edouard in the box but his shot was brilliantly blocked by Souttar. 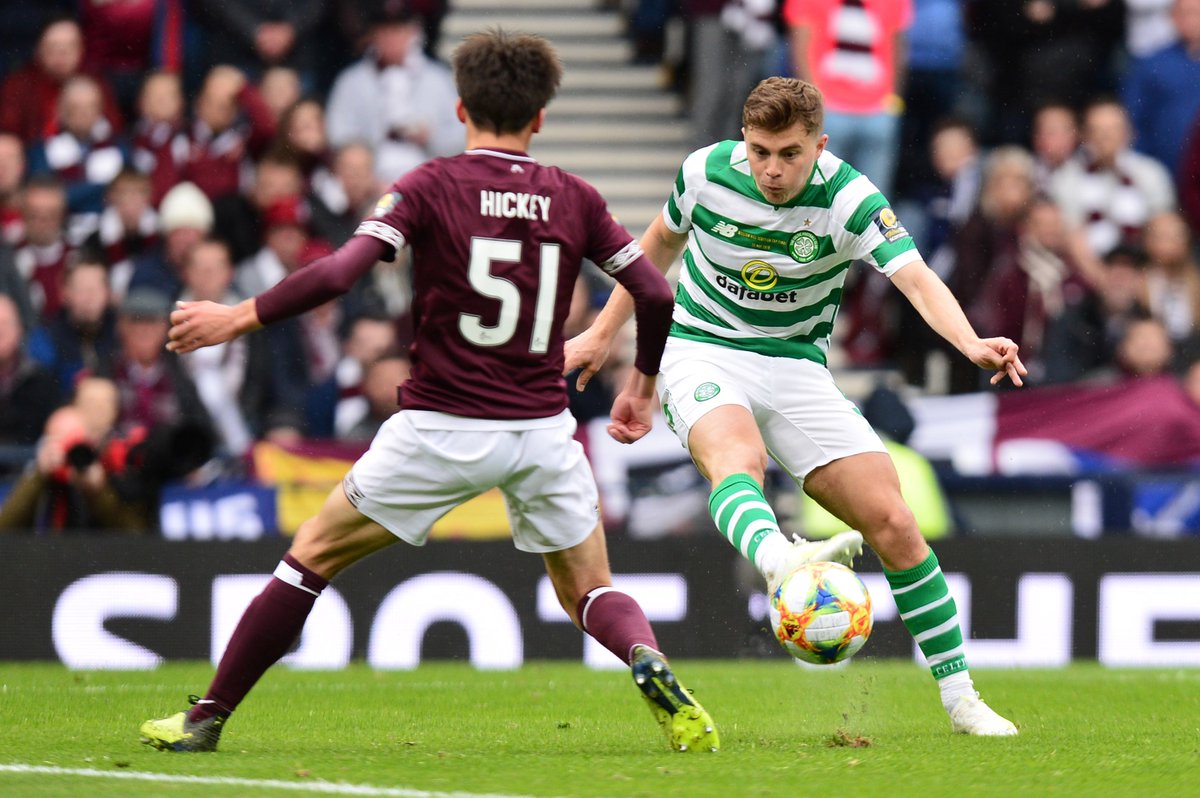 Celtic dominated possession in the opposition half but found it difficult to break them down. Hearts looked comfortable without the ball but the Hoops were clearly in control.

Berra had a good chance just before half-time to open the scoring but he slipped on the wet surface and missed the ball altogether. An uneventful half came to an end as Hearts went into the break as clearly the happier side.

Hearts didn’t take long to make an impact in the second half as Djoum had a pop from outside the box but his shot fell straight to Clare, who backheeled it into the path of Edwards, who finished brilliantly to give his side the lead. 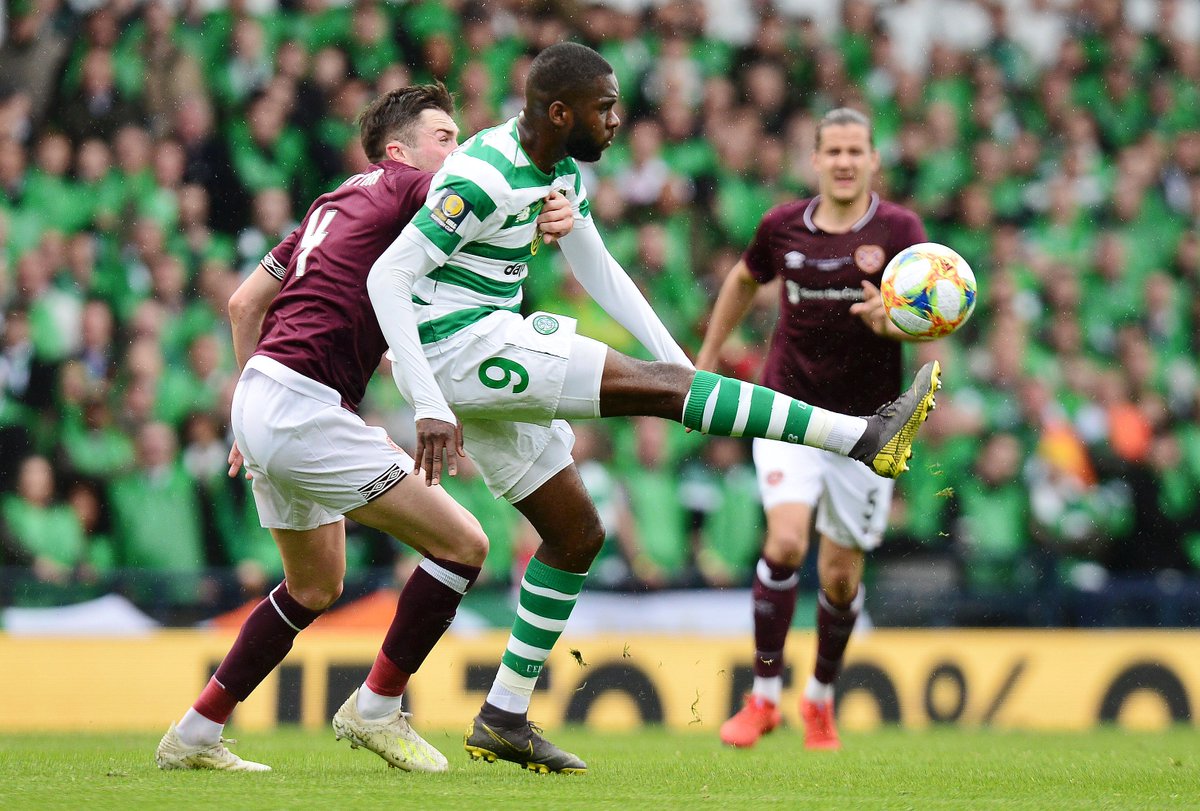 It was a brilliant start to the second half after a boring first. Brown got past three players brilliantly and could have had a shot from a tight angle but he chose to pass to Edouard instead but Souttar did well to deal with it.

Celtic earned themselves a penalty after Edouard left a leg when Zlamal charged off his line to recover a ball and the striker went down and the referee pointed to the spot.

Edouard slotted the penalty into the bottom right but Zlamal would have been disappointed to not save it despite getting a hand on it. The Goalkeeper was booked for the foul that led to the penalty. 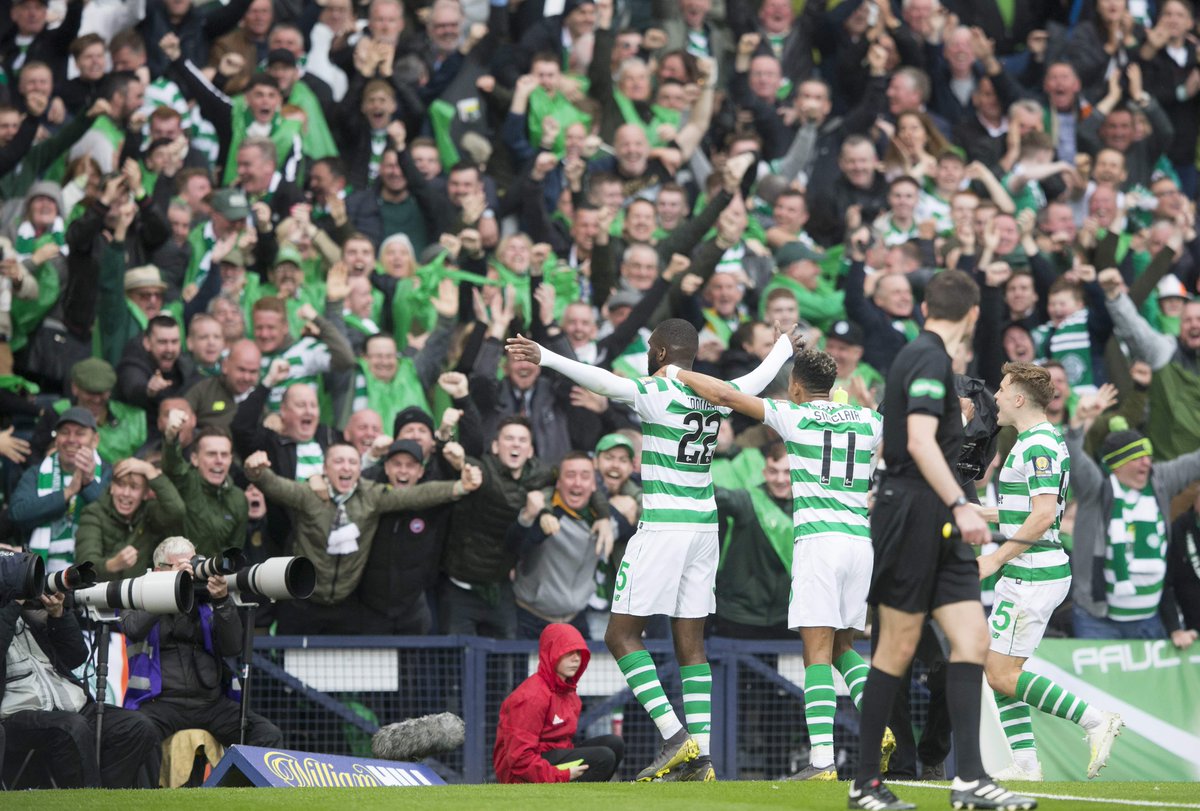 Lustig did well to turn away from Djoum but the Hearts man caught him late and went into the book. Hearts maintained good possession despite Celtic’s equaliser as Neil Lennon looked at his bench.

Berra had a huge chance to give Hearts the lead after he found himself unmarked from Hayes’ corner but his header went over the bar. Huge let off for the Champions.

Ntcham came on for Rogic who had a quiet game and Sinclair replaced Johnston in the next break of play. The substitutions had a positive impact as the Hoops kept the ball well inside the Hearts half.

Berra made a real mess of his clearance inside the box, which gave Edouard the space to get to the ball and go clean through on goal before giving Celtic the lead with seven minutes left to play.

The Hoops took their time with the ball as 5 minutes went up on the board. Bain went into the book for time wasting but he wouldn’t have cared one bit.

Berra had the final chance of the game as he got ahead of Ajer in the box to get at the end of a cross but his placement was wrong and the ball flew wide. 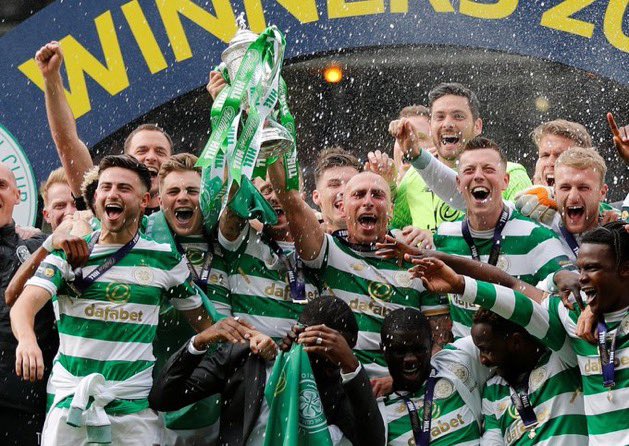 Celtic sealed the game and became the first team in history to win the treble in three consecutive years. A huge achievement for Neil Lennon and his side.

Here’s how some Celtic fans reacted to the victory: