Spurs let a 2-0 lead slip away at Olympiacos in their first group stage game, leaving Mauricio Pochettino very frustrated on the touchline.

However, his men showed plenty of character to beat Southampton 2-1 in the Premier League on Saturday, despite being a man down. They must translate that resilience to their European form when they host Bayern.

Bayern, meanwhile, come into Tuesday’s contest off the back of a 3-2 victory over Paderborn in the Bundesliga.

There are no fresh injury concerns for Tottenham heading into Tuesday night. Giovani Lo Celso and Ryan Sessegnon remain the only long term absentees with hip and hamstring injuries respectively.

Lloris’ was at mistake for Southampton’s goal but he redeemed himself with two outstanding saves to help Spurs win against them. The skipper will continue between the sticks as usual.

Aurier was sent off against Southampton but the domestic suspension should not stop him from starting at right-back in the Champions League game.

Alderweireld has looked solid so far this season and merits a start in central defence.

Unlike Alderweireld, Vertonghen has had a few shaky moments at the back. But he is likely to get the nod ahead of the inconsistent Davinson Sanchez.

Aggressive, energetic and tenacious in the tackle, Rose is an undoubted starter at left-back.

From a deeper role, Winks will be tasked with dictating play and keeping the game ticking

Blessed with pace, power and physicality, Sissoko will add the much-needed energy to the Tottenham engine room.

Scored a goal in the 2-1 victory over Southampton and he’ll be eager to get on the score sheet again. Ndombele will give balance to Pochettino’s side.

Eriksen is back in favour and should help provide creativity for the forward line.

With his devastating pace, movement and dribbling skills, Son could give the Bayern defenders a torrid time on Tuesday.

Tottenham’s talisman, a leader on the pitch and off it, Kane will be hoping to get on the score sheet and guiding his team to three points against the Bundesliga champions. 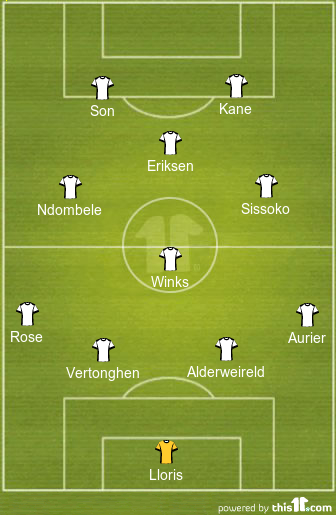