According to the Sun, Tottenham Hotspur are planning a £25million swoop for Sampdoria’s centre-back Joachim Andersen. The report claims that Tottenham are viewing him as a replacement for Toby Alderweireld, who is out of contract at the end of this season.

Joachim Andersen, 22, has been impressing in Italy and his performances have not gone unnoticed. The Dane is currently plying his trade with Sampdoria, having moved to the Italian club from FC Twente back in 2017. He has developed into one of the most impressive young defenders in the Serie A in the last year.

The 22-year-old has been an ever-present in the Sampdoria side so far this season, playing nine times and assisting a goal. Anderson’s impressive displays for Marco Giampaolo’s side have caught the attention of Spurs and they must definitely make a move for him in January. 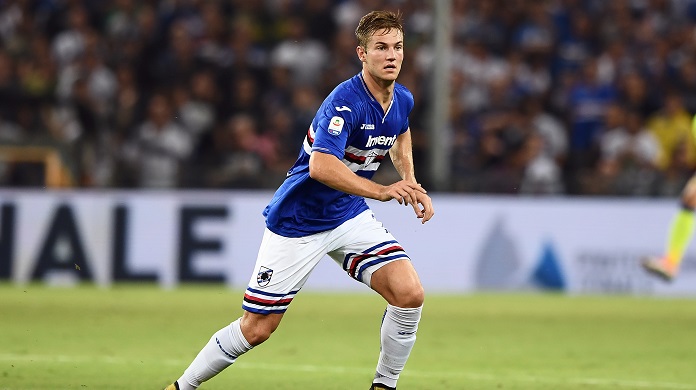 It is a well-known fact that Toby Alderweireld is out of contract at the end of this season and losing him for free would be a big blow for Spurs. However, he has a clause in his contract, which would let Tottenham extend his deal by a year.

The extension would activate a release clause of £25m though, and the Lilywhites would obviously not want to lose their star man for such a paltry sum.

Alderweireld has played a key role for Spurs over the last few years under Mauricio Pochettino and has developed into one of the best central defenders in the Premier League. Certainly, the Belgian’s departure would leave a huge hole in the defence, so Pochettino must prioritise signing a long-term replacement in January.

Pochettino, who failed to sign a single player in the summer transfer window, has hinted that he wants to strengthen his squad when the transfer window reopens. And Joachim Andersen would fit the bill perfectly.

Andersen has represented Denmark’s Under-21 side three times but is yet to be called up to the senior squad. The 22-year-old still has 18 months left in his contract but has no interest in extending his stay with Sampdoria, as per the Sun.

Tottenham should look to take advantage of Andersen’s contract situation at Sampdoria. Andersen is one of Europe’s hottest young defensive talents, blessed with a fantastic technique and ball-playing abilities. He is tall, powerful, strong in the air and is robust in challenges.

Standing at 6ft 4in, the big Dane is a constant threat from set-pieces as well. The 22-year-old is an excellent reader of the game, can shrug off players with ease and build attacks from the back.

Such qualities make Andersen an ideal player for Pochettino, who has been an advocate of nurturing young talents. Andersen is a player who has the potential to grow and at £25m, he would represent a massive coup for Spurs.