Perhaps a game you’d expect Spurs to win, but Norwich have outdone themselves in this fixture since their promotion two years ago. Both games ended in a 1-1 draw last season, while Chris Hughton’s men edged their league cup encounter in a close fought 2-1 victory. 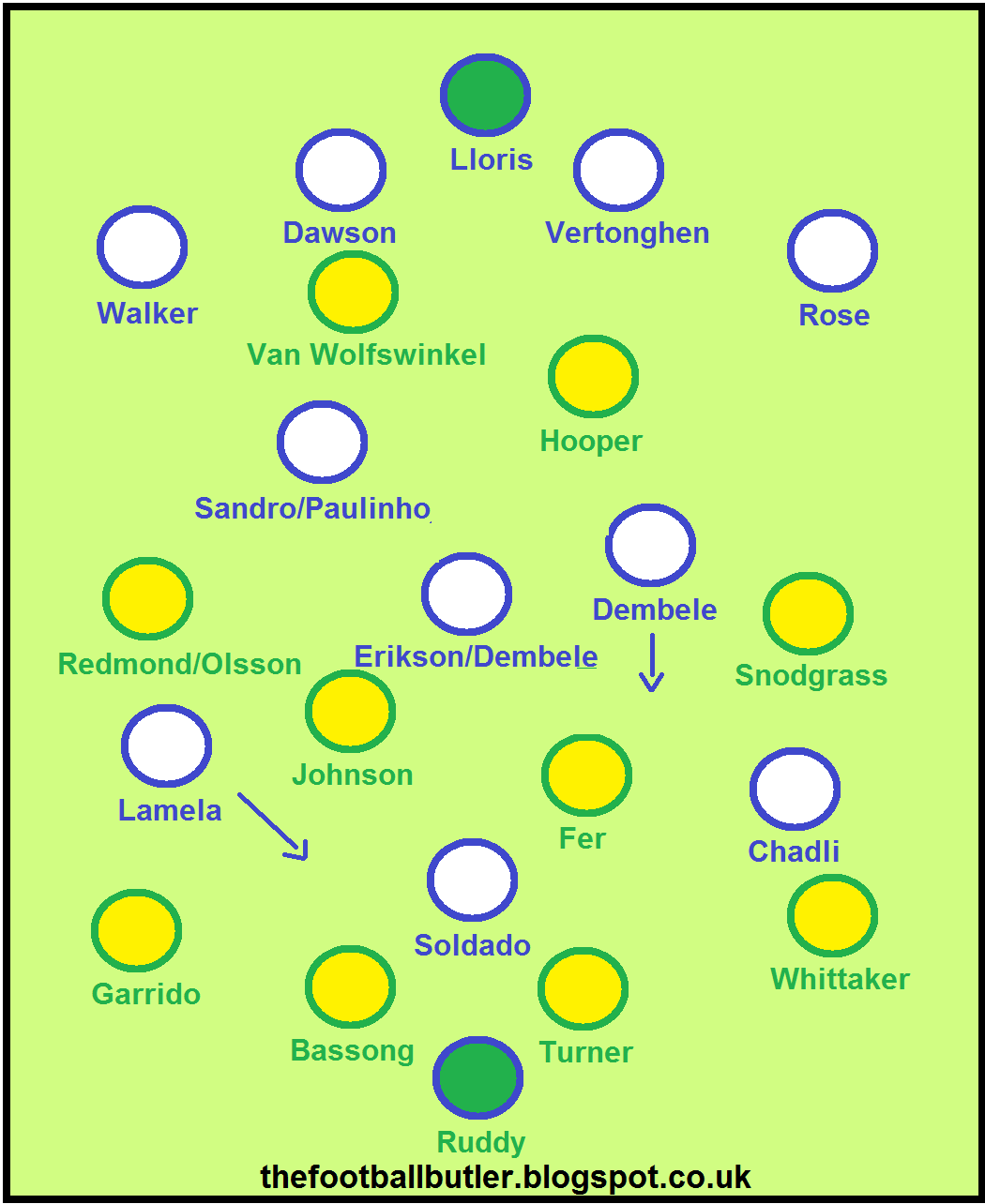 Predicting how both Andre Villas-Boas and Hughton will setup for this encounter is difficult given the stark changes to both squads over the summer.

Villas Boas stated after their 1-0 defeat to Arsenal 2 weeks ago that Spurs’ 4-3-3 system was ‘more or less the way we want to go forward this season’, a system that accommodates and enhances Tottenham’s dynamic midfielders.

That system, however, does not play into the hands of Spurs utilising the intricately intelligent Christian Eriksen, a pure no.10. Given their inability to control possession in the final third against Arsenal 2 weeks ago, combined with the reliance and organisation of this stubborn Norwich side, it wouldn’t be particularly surprising to see Villas Boas adapt his system to inject some needed creativity into the team.

Alternatively, it’s likely that Erik Lamela will slot in more easily, starting out on Spurs’ right and cutting inside onto his left foot. Whether Villas Boas would elect to start Lamela and Erikson out wide as inverted wingers would be interesting (and make the team remarkably similar to Roberto Mancini’s league winning Man City side). Given his tendency to favour a more direct winger in recent times (Hulk at Porto, Daniel Sturridge at Chelsea) this might be unlikely though, with Nacer Chadli offering a more balanced option on the left.

Spurs’ midfield will almost certainly consist of their physical dynamic players, who will need to keep Norwich’s midfield under pressure in order to maintain their aggressively high line from being exploited by the pace of Ricky Van Wolfswinkel. While Norwich don’t have a player with the pace of Theo Walcott, Michael Dawson looked vulnerable to balls in behind 2 weeks ago, and pressing Norwich in midfield is essential in order to ease the pressure off him.

Hughton now has Gary Hooper fit again, and the greatest question surrounding Norwich relates to whether both he and Van Wolfswinkel will start together. If so, expect Norwich to set up in a rigid 4-4-2 system, keeping their two banks of four intact without possession, before looking to break out wide via their more creative players.

How Van Wolfswinkel and Hooper would bond is difficult to know. You would probably regard both players as outright no.9s, normally partnered with a more creative player behind them. Whether they’ll gel together remains to be seen.

With a 3v2 advantage in midfield, Spurs will almost certainly dominate possession for much of the match (not that this will concern Hughton). Martin Olsson might start on the left flank over the impressive Nathan Redmond for a more defensive minded approach, but Redmond’s pace and ability to beat a man may warrant his place in the team. Kyle Walker  is a positional liability (as Ukraine exposed him frequently with diagonal balls this week), and is lucky to have great pace to help him recover from his errors. Redmond vs Walker could make for a great battle on the left. Leroy Fer and Moussa Dembele might also find themselves up against each other. Both are remarkably similar players (and fashionable at the moment), archetypal box-to-box midfielders who sit deep without the ball before bursting forward. Given the physicality of both players you’d expect a pretty even battle.

If both teams play to the shape’s anticipated, then the key battleground of the game will be in between the lines of Norwich’s defence and midfield. Whether Lamela, Erikson and Roberto Soldado will be able to link up in order to exploit it though remains to be seen- it is likely the trio have had as little as three training sessions together as a result of the international break.

Given both team’s solid defensive records, it would be a safe bet that this will be a low scoring game (under 2.5 goals is currently 11/10 on paddy power). You might therefore anticipate set pieces to be the decisive aspect of the game (Norwich were reliant on them frequently last season). Norwich have only won one of their last 11 on the road, while Spurs are yet to concede at White Hart Lane this season.

Villas Boas is aware that Norwich are ‘well organised, well managed’, and anticipates that ‘it’s not going to be an easy game… we have to be responsible’. Hughton too remarked that ‘confidence is good at the moment’ in his camp.

Stats would therefore suggest that this game might end in a draw, but given the remarkable flair now instilled in this Spurs outfit and their ability to keep a clean sheet, I’d back them to win 1-0.

Blast From The Past