Amid the continued speculation about Gareth Bale and Tottenham signing midfielders Nacer Chadli, Etienne Capoue and Paulinho, two players from last season’s squad have been swept under the carpet, with one in particular not mentioned at all. The two players I am referring to are Gylfi Sigurdsson and Lewis Holtby. 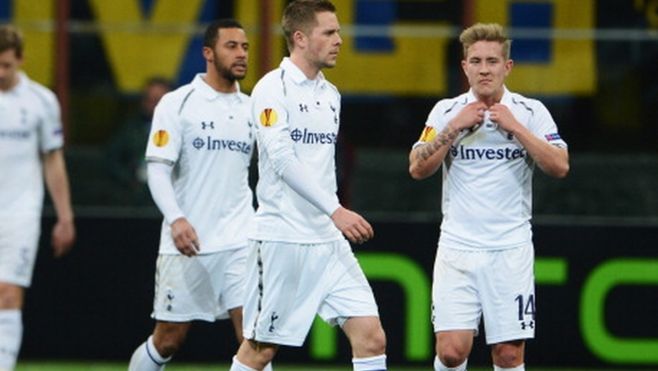 It is common knowledge that Andre Villas-Boas will look to implement his favoured 4-3-3 formation this season, a subject I discussed here. And although I believe Mousa Dembele, Sandro and Paulinho will be the first choice midfield three, the roles of Sigurdsson and Holtby this season should not be underestimated.

The pair made a combined total of 65 appearances last season with only 28 starts between them. This year they’ll be hoping to have a lot more starts and here is why they might be key players for AVB over the season.

Lewis Holtby showed glimpses of his talent after signing for the club six months earlier than expected, by joining in January. He was very influential against Basel over two legs in the Europa League quarter-final tie and will want to show his worth this year.

He enjoyed a successful tournament as Germany captain in the European Under-21 Championship’s, despite his country bowing out in the group stages, he was selected in the UEFA Team of the Tournament and was a standout performer for his nation. It was expected that he would take that good form into pre-season.

However, he sustained a knee injury during the tournament and has missed all of his pre-season because of that. The 22-year-old spoke to Spurs TV about his desire to secure a first team role and how he wants to extend his contract even longer.

He said: “Everyone at this club really made it very easy for me to settle in so I feel like I’ve been here for two or three years. It just feels so comfortable and London is such a nice city. I think I made absolutely the right decision to come here – I hope I can extend my contract to five (years). My goals will be to get some silverware with Tottenham, to be in the starting line-up and to win all of the London derbies – home or away.”

It is an ambitious goal considering Tottenham’s manager has added three players to a previously packed midfielder but now that Tom Huddlestone and Jake Livermore have departed, the German should get more playing time.

Holtby believes his versatility is an asset AVB can use throughout the season and he believes the deep-lying role in central midfield is his best position. Injuries are inevitable with Spurs competing in four competitions this year and Dembele’s previous injury record last season means the former Schalke man will get plenty of chances. He may start the season on the sub bench that he has become accustomed to but as the season progresses, he can expect to have a crucial role as the playmaker in Villas-Boas’ midfield.

Gylfi Sigurdsson signed for Spurs last summer and after initially struggling, he was one of our most important players towards the end of the season. It was hugely positive for the Icelandic midfielder that when given game time, he showed his ability to Spurs fans.

Similar to Holtby, he probably won’t start the season but has seen players leave White Hart Lane that will strengthen his chances of obtaining a first team starting position. He was often vying with Clint Dempsey last year but Villas-Boas’ selling the American shows he has faith in Sigurdsson to succeed.

Like Holtby he impressed in the Europa League but he also become a key figure as we ended the league season well. He scored in crucial draws against Chelsea and Everton and hit a vital goal in the away win at West Ham.

Now that he has had a whole year to settle in with the squad, I expect him to improve on his goal return this year and he will be expected to play a number of roles this season. His favoured position is behind the striker as a trequartista, which isn’t actually suited to a 4-3-3 formation but more to a 4-4-1-1 or a 4-2-3-1, formations used by AVB towards the end of last season, thus seeing improvement in Sigurdsson’s game.

The Icelandic international will know that his role will change this season and he’ll have to adapt to the team but he will be aware of the fact that he is a plan B for Villas-Boas, as he can play as the central-attacking midfielder. In pre-season we have seen him line up in midfield and as one of the forwards and I expect him to have a big year at the North London club.

Both these former Bundesliga players will have taken great encouragement from the way they ended last season and will be confident in their ability to obtain a starting role this year, so do not be surprised if the duo end up becoming key figures in Villas-Boas’ starting eleven and are influential players at White Hart Lane for years to come.

Watch these two videos before you leave!