Theo Walcott, Richarlison, Ademola Lookman and Bernard – these are four electrifying wingers that Everton and Marco Silva have at their disposal. But while Walcott has struggled to make an impact since his move from Arsenal in January 2018, Lookman is only 20 and still has a lot to learn before becoming useful in the Premier League.

However, as per Daily Mail, the Toffees are going after Barcelona star Malcom. The Brazilian man has been in exceptional form since his move from Watford and is leading the goalscoring charts at Goodison Park. But on the other hand, Malcom has struggled to make any such impact, making nine appearances in all competitions.

While he does have two goals to his name, including one in the Champions League, Daily Mail further reports that Malcom is unhappy that Barcelona have failed to live up to their promise. The 21-year old’s transfer saga made the news over the summer when he made the 11th-hour U-turn to sign for the La Liga giants instead of AS Roma.

The former Bordeaux star was supposed to get enough time to prove himself, which hasn’t happened so far. While has made 5 appearances in the La Liga alone, Malcom’s total minutes are only 97 with just one start to his name in the 4-3 loss to Real Betis. 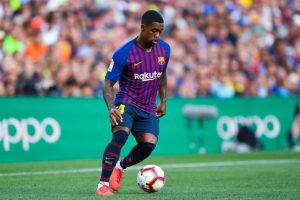 Now with Everton’s interest, it may be a chance for the youngster to get what he was promised despite Marca revealing that he isn’t interested in leaving but will consider a move after the 2018/19 season. It further adds that Malcom wants to see if Barcelona manager Ernesto Valverde will have faith in him before thinking about his future.

While a loan move isn’t off the charts, Everton should try to convince the club and sign the Brazilian. If they succeed in doing so, they will be in for a treat. Not only can Malcom flourish like Richarlison in the Premier League but his pace and eye for goal will help them with their Europa League dream as well.

Read More: Three Everton stars who have no future at Goodison Park including this £24m signing

But then again, convincing Barcelona to let go of a highly rated youngster will be tough. While Everton may have somehow convinced them to let go of Yerry Mina, Lucas Digne and Andre Gomes, getting Malcom will be tougher.