Newcastle this season have an embarrassment of riches after a summer spending spree conducted by Rafa Benitez after he looked to send his side straight back into the Premier League. Up front, in particular, they look very strong as Dwight Gayle has so far been the number 1 striker this season, however, Perez and Mitrovic have been scoring too when called upon.

We look at the strongest Newcastle team for Benitez this season.

The ex-Nottingham Forest keeper first made his progress into the Newcastle team at the end of last season. He has been competing with summer signing Matz Sels but looks to have won his first team place after a slow start.

Benitez has rotated between Yedlin and Anita so far this summer, but the young American is a real handful going forward. His passes and attacking play adds another dimension to the Newcastle attack with his runs from deep. A player that could develop into a future star.

Newcastle captain and perhaps a future England international. He has really stepped up this season and has started to prove himself as the best central defender in the Championship.

Signed from fellow relegated club Aston Villa in the summer, he has proven that he is a good defender. He has formed a good partnership with Lascelles which is one of the reasons Newcastle have been good defensively this season.

The Newcastle academy graduate has finally made the left back position his own and will be looking to ensure Newcastle return to the Premier League so he can prove he belongs at that level.

One of Newcastle’s star men. The speedy winger was previously voted the best player in the Championship after great performances for Bournemouth, and he is on his way to proving that again with his great crossing and goalscoring ability. 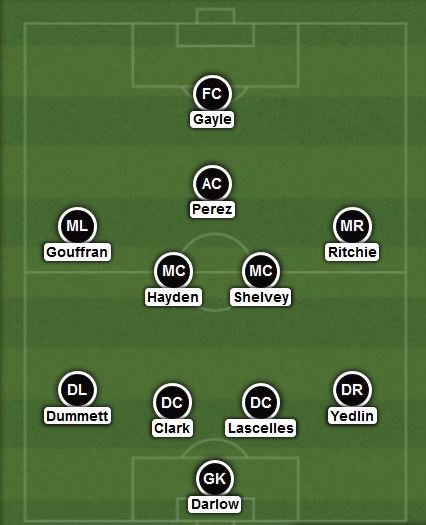 All of Newcastle’s play runs through Shelvey. He is a great playmaker, frankly too good for this level. He has a wonderful passing ability, and just little over a year ago was proving himself in the England team, even making England appearances.

The former Arsenal man has proven to be a good signing for Benitez. It is his job in midfield to break up play and give it to Shelvey, and his performances have earned him a call-up to the England u21 squad.

The French winger is one of the only French players to remain at Newcastle after a spending spree in Ligue 1 when Newcastle were in the Premier League. However, Gouffran has shown himself to be up for the challenge of returning to the Premier League and the speedy winger has caused problems for Championship defences.

Perez is a player that impressed for Newcastle in the Premier League with his relentless endeavour, pace and quality on the ball. Newcastle have been playing Mo Diame in this position just off of the striker, but Newcastle fans have recently branded him ‘Sissoko mk2’. So we have chosen the Spaniard to play in this crucial role.

This is a tough one, and Newcastle could play either Gayle or Mitrovic in this position. But it is Gayle that has been the first choice for Benitez, and he hasn’t disappointed as he has scored 11 goals in 12 league games. If goals dry up, Newcastle fans will be happy to know that they have Mitrovic waiting in the wings.