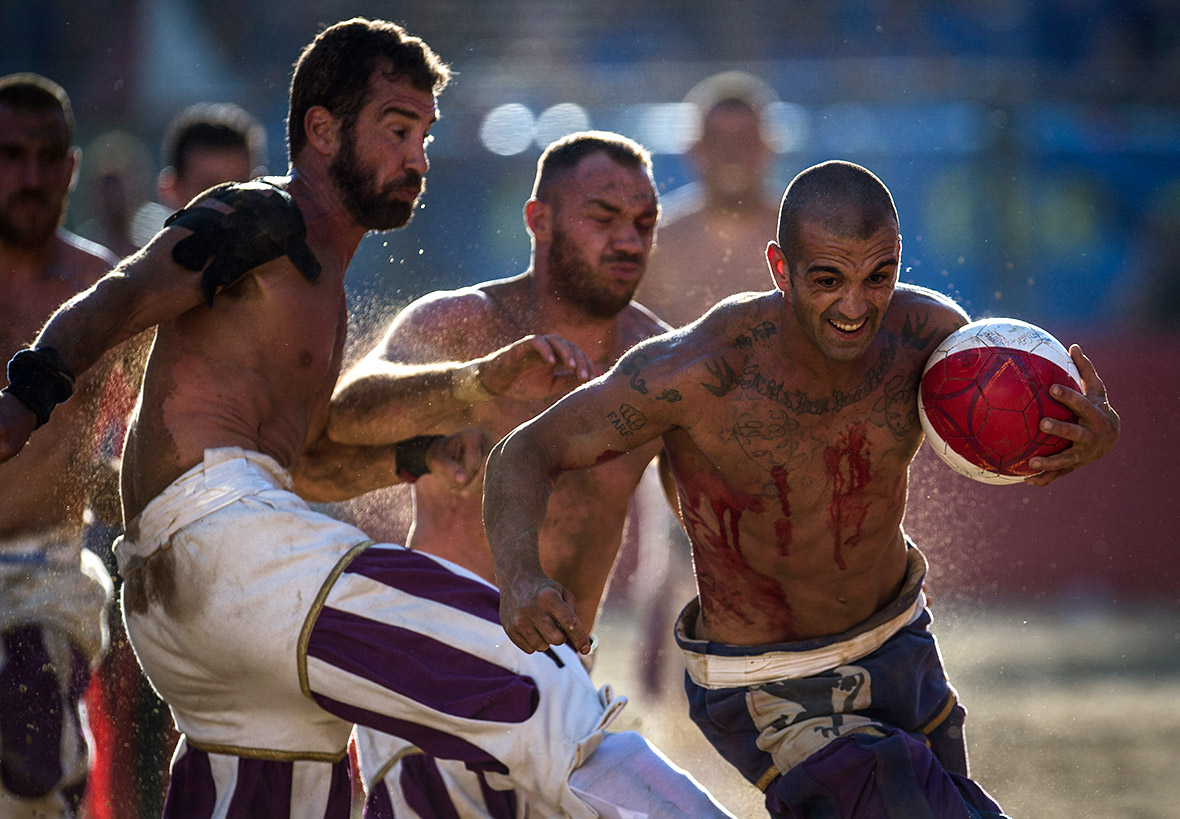 Football is a game of passion, strength and teamwork. And the beautiful game goes back to the 18th century, to give you an idea of what the Sport we all love was like back then. The most common formation was a 2-5-3 and holding the ball in your hands was still very much widely debated.

But the game has grown and today, Football is a multi-million-pound sport played in hundreds of countries, both big and small. But little do many know that in the 15th Century, a different ball game was created in Fiorentina, known for its extreme violence, honour among the athletes and almost gladiator-like feel.

The Calcio Storico was born before Football (yet it translates as Historical Football), yet its roots are very much the same. Next season, the two sports clash, as ACF Fiorentina (the football team) are set to wear 4 away kits in honour of the Calcio Storico. Today, we ask what Calcio Storico is and if football learn from this much older game.

Born in the Renaissance, practised by the Romans and adopted by the soldiers to keep shape during times of peace, the Calcio Storico is a tradition in Fiorentina and a part of the fabric of their society. It is only played in Florence, which marks it out as a unique sport on earth. At times, it has more in common with gladiators than actual football.

Like in football, there is a sense of pride in supporting your team. The city is divided up between white, light blue, greens and reds. These 4 colours all combine to make up the Purple of the iconic Fiorentina home kits; speaking of which, the Florence outfit will sport 4 away kits in honour of the 4 teams in the slightly more physical sport that also dominates Florence. A referee and six linesmen control the game along with a judge off the field. The match is played for a total of 50 minutes without interruption even if players receive injuries, with no substitutions permitted at all. It is a violent sport though and Martial arts techniques are allowed. However, it is not allowed for two players to attack somebody at once. The aim of the game is to throw the ball into the goal, and the team with the most number of goals wins.

While many deem the game as barbaric, these players give their heart and soul to the game, taking patience, strength and honour to become a “Calciante”, all while receiving little or no pay; a stark contrast to the £220,000 that Manchester City exile Yaya Toure earns.

Some outside of Florence called the game “barbaric” or “cruel,” but we have to understand that it is a part of the tradition of the city and the people. I decided to get the opinion of one of my Italian Friends Matteo who was born in Fiesole, a small town on the outskirts of Florence. Matteo was no stranger to the sport in his days in Italy, before moving to England and agreeing to meet with me.

Matteo, thank you for meeting with me. As a Florentine, what do you think of the Calcio Storico?

“No problem, to an outsider, it may seem violent, and it is. But it is in the roots of my city and while you see the violence and hear stories of police involvement you don’t see the honour these guys have in being a Calciante, these guys are often compared to as Gladiators but they have more in common with…knights. When it is all over our blood is all purple and we all love Florence, FORZA VIOLA!” Of course, you are a proud ACF Fiorentina fan but you often watch football from all around the world, what do you think Football players have to learn from the Calciante?

“I think not going down so easily. This applies to every league but there is no honour in diving. You see these guys get punched 3 times in the head, cuts on their forehead and blood is spilling down their face but they still push on. You see in the Champions League Final (in 2017) Sergio Ramos goes down too easily when getting slightly pushed, the other player then gets sent off! What was the point in that!?

I grew up watching the likes of Gianluca Lapi take 10 times worst punishment and still continue fighting, say what you will but the 27 men on each side are tough and don’t go down easily.”

The game is violent though, I know it is part of the culture but these guys risk their lives. What makes them wake up and say I want to be in that?

“It’s hard to describe, but you are born with it. Like it is….within you. But I think it has also to do with pride and representing your local neighbourhood. I remember at my school guys were always shouting stuff like “VIVE FIRENZE” and then before long, everyone was chanting it. We were only like 8 or 9 as well! It is all about pride, passion and representing Florence.”

Do you think anything needs to be changed to make the game safer?

“Not really….no only joking I think the rules are too simple and there are too few rules. You cannot punch a player on the ground but some sneak in a few punches anyway. In UFC the Referee’s pull players off when it is getting too bad and that is what we need. Referees that get stuck in more.

Matteo thank you very much,

While yes, Calcio Storico is undoubtedly violent, it is in the blood of the city and the people. Maybe football players could learn about the honour and respect that these men have. Not the violence, but the fact that these men, whatever side they are on, respect one another and give 110%. How often can you say that about some Sunderland players? This season expects to see a variety of away kits from Fiorentina and their sponsor Le Coq Sportif as the purple-clad side show their true colours.