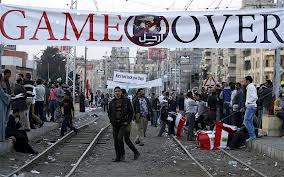 Militant, highly politicized soccer fans who played key roles in the toppling of Egyptian President Hosni Mubarak, opposition to post-Mubarak military rule, and last month’s mass protests against Turkish Prime Minister Recep Tayyip Erdogan have been as organizations conspicuously absent from the dramatic scenes in Cairo with the overthrow of President Mohammed Morsi and ongoing smaller scale protests in Istanbul.

While endorsing participation of their members in ongoing protests in both countries, violence-prone, militant soccer fans known as ultras in Egypt and Turkey have retreated to their traditional public stance that they are not political organizations but do not stop their followers from engaging politically. It is a position designed to minimize their vulnerability as groups and shield them from being politically buttonholed.

Egyptian ultras, one of the country’s largest civic groups, adopted that position on the eve of 18 days of mass protests in 2011 on Cairo’s Tahrir Square that forced Mubarak to resign after 30 years in office. At the same time, leaders privately encouraged their members to play the key role they did in the president’s overthrow.

The past week’s events in Egypt form a dilemma for the ultras whose members populate the full spectrum of politics in the country. The ultras have a deep-seated distrust of the military and the security forces who have re-emerged in full strength as a result of the anti-Morsi protests. By the same token, many ultras oppose Morsi because of his perceived attempt to undermine the goals of Egypt’s popular revolt and his failure to reform the security sector.

Like in Egypt, rival fan groups united in Turkey last month to protect protesters and add their voice to the opposition against Mr. Erdogan. But in contrast to the Egyptians, they publicly declared their united stand as organizations under the banner ‘Istanbul United.’

Nevertheless, the tactical retreat and renewed seemingly exclusive organizational focus on soccer of fan groups in Egypt and Turkey follows incidents in both countries ostensibly designed to intimidate the fans and curb their activism.

More than 70 militant supporters of crowned Cairo club Al Ahli SC were killed in February last year in a politically loaded soccer brawl in the Suez Canal city  of Port Said that many believe was an effort that got out of hand to punish the ultras for their opposition to and vicious clashes with the police. The ultras have since then staged Port Said-related protests and stormed stadiums because of a ban on spectators attending matches.

The Egyptian Football Association (EFA) this week cancelled the soccer season because of the post-Morsi political volatility. It had earlier suspended the league because of security concerns.

Much like the Egyptian ultras, spokesmen for Carsi, the powerful, popular militant soccer support group of Istanbul’s Besiktas JK, say they are lying low since 20 of its members were charged with being part of an illegal organization in the wake of last month’s Gezi Park protests.

As a result, Carsi denies any relationship to nightly Hyde Park style gatherings in the Istanbul neighborhood of Besiktas’s Abbasaga Park, one of multiple such public forums being held across the city. Nonetheless, Carsi members dressed in their club’s black and white often moderate the Abbasaga discussions and performances organized to discuss the future of the protest movement, exchange news and listen to music.

The charges against Carsi reflect Mr. Erdogan’s attempts to criminalize the fans and the protesters in a bid to cater to a traditionalist and conservative base and distinguish himself from the more modernist façade of his Islamist rival, Fethullalh Gulen, a powerful, self-exiled, 76-year old imam with a strong popular and media base and influence in state institutions like the police and the judiciary.

Mr. Gulen, shared Mr. Erdogan’s criticism of the protesters and blaming of international media but in contrast to the prime minister quickly backed away from denouncing them as vandals and foreign agents. Instead he urged his followers not to underestimate the grievance underlying the protests and to accept that his movement as well as the government had not done enough to resolve social problems. At the same time, he sought to drive a wedge between the protesters by praising the original peaceful environmentalists demonstrating against the cutting down of trees in Taksim’s Gezi Park as opposed to violent protesters, a reference to the soccer fans.

Carsi’s decision to bide its time did not stop small groups of fans of rival clubs from joining a demonstration in late June by some 20,000 fans of Fenerbahce who were protesting against the allegedly politically motivated allegations of match fixing. The protest demanded the resignation of Mr. Erdogan and denounced Galatasary for its alleged involvement in one characteristic of the match-fixing scandal: a struggle for control of Fenerbahce, Turkish soccer soccer’s most prized political asset, between Mr. Erdogan and Mr. Gulen.

The protest came days after European soccer body UEFA banned Fenerbahce alongside rival Besiktas from competing in European championships as a result of match-fixing allegations. Both clubs are appealing the decision.

In contrast to a protest 24 hours earlier on Istanbul’s Taksim Square against Mr. Erdogan’s haughtiness, grandiose urban plans for Istanbul and perceived attempts to Islamize Turkish society which confronted a large police force at the ready, security forces were nowhere to be seen during the Fenerbahce march down Bagdat Caddesi, the high-end shopping throughway on Istanbul’s Asian side. A day earlier police armed with tear and pepper gas and backed up by a water cannon occupied Taksim and surrounded protesters seeking to enter the square.

Less visible was a second contrast between the two Istanbul protests: while Fenerbahce fans protested under their group and club’s banners Carsi as a group has refused in recent weeks to participate in regular demonstrations on Taksim square.