Swansea City succumbed to a disappointing 2-1 defeat at home to a struggling Stoke City after leading in the first minute of the game.

The result has dropped the Swans from the top to fourth position in the table, after Nottingham Forest and Preston North End won their respective games. West Brom are the new league leaders, only a point ahead of Steve Cooper’s men.

It took 60 seconds for Swansea to take the lead after Yan Dhanda’s run wasn’t tracked by anyone in the Stoke defence. His shot was saved by Adam Federici, but the rebound fell kindly for Ayew to tap home. 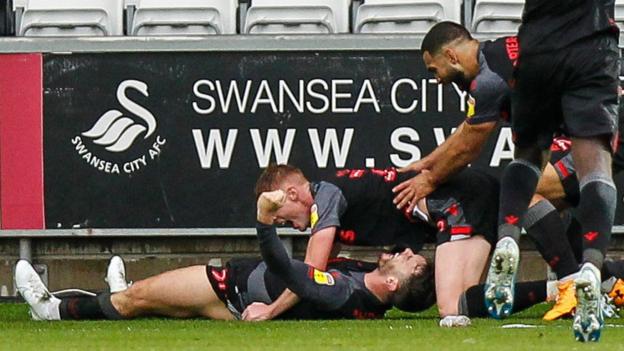 The hosts then pounded the Potters with several chances on goal. Borja Baston had his goal-bound shot blocked, as was Ayew’s attempt that was destined to hit the back of the net.

However, Stoke slowly came back into the game and equalised in the 22nd minute when Sam Clucas powered his effort in after Joe Allen’s shot was saved by Freddie Woodman.

Swansea then came back hard after the break and had two good chances to reclaim the lead. But Federici was equal to the task to save Dhanda’s effort, while Connor Roberts missed a good chance to score.

It was in the 90th minute when Stoke broke the Swansea hearts with a goal from Scott Hogan. He was on hand to tap in the rebound after Woodman had made a good save from Sam Vokes’ header.

All in all, it was a disappointing loss for Cooper’s men, who weren’t clinical enough on the day. Here’s how their fans reacted after this game: