Twenty five minute post match rants, erratic touchline celebrations, assaulting referees, and (just occasionally) moments of absolute genius. With a substantial amount of flair for the unconventional, predicting where Sunderland will finish this season with Paolo Di Canio at the helm is an increasingly difficult task.

Strip away the controversy and it’s time for the Italian’s players to do his talking for him on the pitch. After a lackluster 12/13 campaign and an exceptionally active transfer window, much has changed in the last 4 months from that of Martin O’Neill’s tenure. So what has changed, and whathad to change?

In many ways it is difficult to understand where Sunderland went wrong last season under O’Neill. An experienced manager with a respectable squad of established Premier League players, supplemented by a healthy financial backing meant one could be forgiven for thinking the club were set to make some steady domestic progress.

But when reflecting on O’Neill’s unspectacular 16 month tenure it’s easy to identify mistakes- most apparent in Sunderland’s transfer policy and their predictable tactics.

O’Neill instructed his team to sit deep and play on the counter (which, granted, did sometimes work), absorbing pressure in an organised fashion before breaking with width. While this strategy could be successful against bigger teams, it was often a mediocre way to set up against inferior opposition, and it also highlighted the biggest flaw in the team- a lack of creativity, a reason for their sincere lack of goals.

The issue of creativity– or lack of- can be seen in the personnel O’Neill kept sending out weekly.

James McClean and Adam Johnson were traditional wingers (a reason why Johnson never fully got a chance at City, where Roberto Mancini much preferred ‘inverted’ wingers), capable of beating men but providing little in the sense of guile. In midfield Sebastion Larsson was technically adept, but was unable to forge any relationship with Lee Cattermole. Cattermole was by all means an able player, but represents a typical ball winning player in the modern game- dirty, robust and combative.

Placing Stephane Sessegnon in front of that quartet seems a likely solution to their problem, but- on the contrary- did little to aid O’Neill’s predicament. Despite being an accomplished player, Sessegnon is actually a secondary striker in the crudest sense, acting more as an attacking midfielder in need of service than a primary creator himself. While he made a habit of scoring some impressive goals, he did little to aid his team. If you could compare him to any other player in the Premier League, you’d think along the lines of Michu– except the Spaniard was in a team surrounded by creative players. Steven Fletcher could do little with that platform behind him, and his return of 11 goals in 28 appearances was actually quite impressive; it will be interesting to see how he performs under Di Canio this season. Only Adam Johnson managed more than 3 assists in the entire Sunderland squad last season, a clear sign of the teams ongoing inability to identify a primary playmaker to rely on.

It just didn’t really happen for O’Neill at Sunderland. I renowned man manager and motivator, perhaps he was destined to fail with such an unbalanced team of players; after all, much of his success came in his first 8 games, where he clearly galvanized the team to kick on from Steve Bruce’s tenure.

But it’s strange how he seemed unable to address his team’s problems; in his final January transfer window when solutions were surely available in the market, he bought Danny Graham who flopped, loaned Kader Magnane (and then never played him) and acquired another combative midfielder in Alfred N’Diaye- hardly solutions to his problems.

Sunderland’s 12/13 campaign seems to reflect quite similarly with both Chris Hughton’s Norwich and Harry Redknapp’s QPR. Only Stoke scored as few goals as those three teams last season, and all of them had confused midfield combinations that lacked a cohesive balance between creativity and defensive stability. O’Neill’s use of Larsson in midfield seems particularly similar to Redknapp’s deployment of Stephane Mbia for QPR; both players were relied upon to do a job unnatural to them.

Whether O’Neill’s managerial performance necessitated his sacking is still open to debate. However, there’s no doubting that the team’s tactics and personnel needed rethinking, something Di Canio has clearly done in his short stint in charge so far.

Interestingly, there doesn’t appear to be any significant formation tweaks- Sunderland still lined up in a 4-4-1-1 for their remaining games of the 2012/13 season.

The key change- as has been well documented at Di Canio’s time at Swindon- was the team’s new found aggression and intensity.

Against Chelsea in Di Canio’s first game, Conor Wickham and Sessengon pressed relentlessly, and while the team were still out passed, they attacked with more aggression and greater numbers, mixing up their attacking to not just target the flanks. 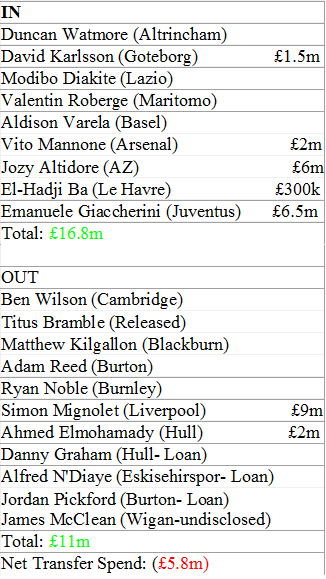 What hasn’t been documented is the club’s precarious financial position, which has surely dictated Di Canio’s transfer activity. The 2012/13 season saw the Black Cats make an operating loss of £27m leading to overall debt of £84m with wages at 82% turnover- an unsustainable platform.

That said, the incoming personnel look to have been shrewdly picked, all reflecting the boundless energy that Di Canio will instill into the team. David Karlsson from Goteborg is a deceptively quick wing forward, a useful asset for counter attacking more directly and a sure replacement for the unpopular James McClean.

Modibo Diakite and Valentin Roberge- both defenders- are both well over 6ft, while Jozy Altidore- the most crude representation of an utter powerhouse- will surely lead the team’s aggressive pressing on the front foot.

The most impressive acquisition is that of Juventus’ Emanuele Giaccherini, a player who excelled at the Confederations Cup as a lone left wing back. Juventus’ decision to sell him off the back of an excellent tournament was surprising, but credits Di Canio’s appeal and the project he looks to be building.

Lee Cattermole– you would have thought- will be in his absolute element if encouraged further to play a destructive game in midfield. It will be interesting to see if Di Canio will favour him and Fletcher- both were out for the season when he arrived.

But how Di Canio will utilize his entire squad remains to be a bit of a mystery. Hence, predicting Di Canio and Sunderland’s league prospects this season is difficult. On the one hand you can think optimistically when reminded of his boundless energy and intolerance for torpor and lethargy.

On the other, how much has Di Canio actually changed? He does not seem to have addressed the pressing concern of acquiring a playmaker, and if you were to assess his performance last season (7 points from 21 and a bucketload of controversy) then one can imagine a similar lackluster reign to that of his predecessors.

But with an ability to divert pressure away from his players and onto himself (something that Jose Mourinho confesses he frequently does) this could be the making of a steadily progressive unit.

Come this weekend expect to see a ferociously fit, fired up team with a well defined and assertive game plan. With just a bit of luck, this could be a groundbreaking season for both Di Canio and his array of new players.

And on that note, good luck to the Fulham physio department who are sure to be working overtime after Saturday’s match.