According to a report from Derbyshire Live, Southampton are set to battle it out with Derby County and West Ham for the signature of Spezia’s David Okereke in the summer.

The report reveals that a number of foreign clubs including Cagliari, Atalanta, Sassuolo, and Genk are interested in the young forward who has been hugely impressive this season.

Okereke has had a phenomenal campaign for Spezia this season and played a massive role in helping his side into the playoffs. The Nigerian has scored 10 goals and has provided 12 assists in 30 appearances in the Serie B this season.

The 21-year-old has shown immense promise this season, which is the reason why so many clubs from around the world are chasing him.

However, Okereke should ignore everybody else’s interest in him and push for a move to Southampton in the Premier League this summer. 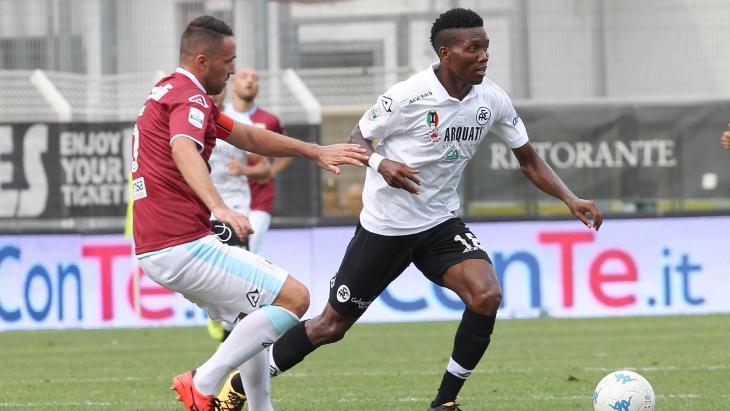 The Saints desperately need a new striker after Charlie Austin and Shane Long’s underwhelming season in the league this season. Danny Ings has done a decent job since his arrival but his lack of goals up front almost cost Southampton their status of being a Premier League club.

Their strikers’ woeful performances up front forced Ralph Hasenhuttl to push Nathan Redmond up front which proved to be an inspired move with some of his performances but the former Norwich man’s tendency to drift wide has left a void in the central areas.

Hasenhuttl will need to seriously address this issue in the summer and signing Okereke would certainly bring him rewards next season. The Nigerian fits the Austrian’s style of play perfectly and he would be deadly next to someone like Redmond next season.

Okereke, like Redmond, is capable of playing anywhere across the front three but his best position is as a number 9. The 21-year-old is everything a manager looks for from a young forward.

He possesses electric pace phenomenal dribbling skills, and incredible strength to hold off his opponents, despite being under 6 feet tall.

The young Nigerian is an immensely composed finisher and he would guarantee goals at Southampton next season. His maturity, despite his age, is hugely impressive and under Hasenhuttl, he will turn into the next big thing in African football.

Southampton’s need for a new striker has been overly evident this season and David Okereke would fit in perfectly. His pace and dribbling will bring the St Mary’s to its feet and his finishing will help the Saints move higher up the table next season.