Former Liverpool player Luis Suarez’s Liverpool contract to Barcelona has been leaked and well what was stated in the contract seems to be slightly unnerving for those who expected Liverpool to sell Suarez as a hot property.

According to the Leaked contract, which was published in Football Leaks, Suarez was sold to Barcelona at £64.98million rather than the £75million that was earlier announced by the club. This just states that Barcelona got a huge advantage as they signed Suarez pretty cheap. 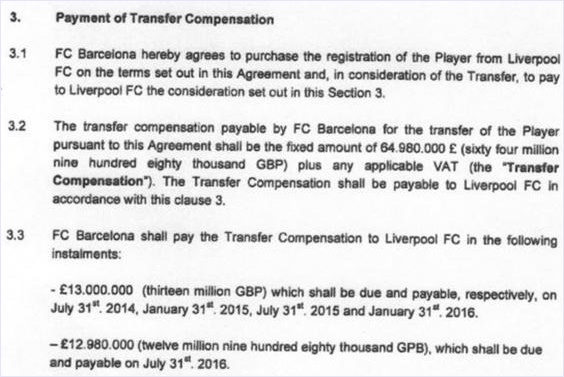 The contract further reveals that the total amount of £64.98million will be paid by Barcelona to Liverpool in 5 installments 4 of which are already paid, a chunk of £13 million each and the fifth instalment which is due in July 2016 will be amounting to £12.98 million.

Suarez has scored 67 goals and has 37 assists to his credit since joining Barcelona in 2014, all we wonder now if Barcelona got the man cheap or was money the only factor that decided the player’s transfer to Barcelona.