Weigh anchor and hoist the mizzen! There are treasures to claim and ships to sink!…A pirate’s wonderful life, sailing away without schedules or ties. Packed for months in a rotten ship with stinky fellows and craving any unsuspecting cargo ship to get more prices. This life forged on the seven seas, serves as an inspiration from Prime ministers to chimney sweepers, whom try the unthinkable and most dangerous deeds to get rich.

The realm of football is not exception; there are hundreds of players that spend their careers going from port to port. They are ball’s mercenaries which are only loyal to a price tag. The transfer season is the busiest time for them, although any season is good to move to a most profitable land in their case.

Hence, I have compiled a short list of the most famous buccaneers I can recall. Surely, there will be some that I miss, but the chosen ones have everything to represent the craft of piracy to the fullest.

Known in the Spanish Armada’s lair as “el puma”, has the enviable pleasure of having played with 12 different teams. From his beginnings in Paris Saint Germain until his recent return to the Premier League, Anelka has fought in 5 diferente countries. Full of speed and sublime technique, the Frenchman enjoyed the best time of his career while playing for Chelsea, even missing that painful last kick in Moscu.

A prominent presence inside the box, lethal on the air and always playing with a chip on his shoulder, seems like a just description of this mate. Trotting his way through 13 different clubs, this nomad comes fourth on our ranking. His height and physical presence made him Serie A’s undisputable poacher and recipient of the record for more headed goals in the history of the Italian league. The summit of his adventures came while wearing Internazionale de Milano’s colors; he scored 103 times in 143 games for the nerazzurri.

A.K.A. Rivaldo is quite a pirate. Having played in 15 clubs so far, I’m beginning to think he makes his caipirinhas with a couple of drops with the fountain of youth. At 41 years old, he currently plays for Sao Caetano in his native Brazil. His astonishing technique and dribbling ability, make him one of the best footballers ever. Winner of every single prize there is in football, including a World Cup and a Champions League trophy, this buccaneer knows how to turn every trip into silverware. His peak was reached in the catalan territories; while wearing Barcelona’s shirt, he let the world know the proper way to score with a magnificent bicycle kick from outside the penalty area. 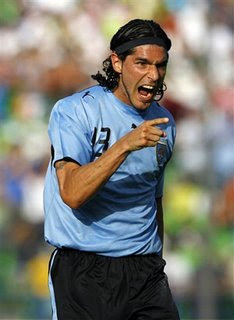 The final whistle blows, and Ghana’s national team is out of the World Cup. Luis Suárez set the scenario with a goal saving handball in regular time for lieutenant Abreu to get the spoils. With Gyan failing to score the resulting penalty kick, Ghana fortune was decided. After extra-time, the score is 3-2 so far on penalties with Abreu preparing himself to take the penalty that could send Uruguay to the semifinal. Like he is playing with children in the park, Abreu executes the kick Panenka-style (soft overhead through the middle of the goal). 23 teams have played alongside this old sea wolf, hero for his national team and Mexico’s Cruz Azul, where he scored 46 times in 52 games. A real globetrotter born in the tiny city of Minas.

What can you say about “Captain Pfann”, exploring unknown lands, always searching for adventures and master of many dialects. This retired 40 years old goalkeeper, is the “Indiana Jones” of sports, being the only player in history to have played in all six FIFA confederations and of course, all five continents. Originally form Zwisel, Germany, Pfann has defended goals and warmed up benches across the world. Among his most exotic journeys are: Singapur( Geylang United) and Orlando Pirates in South Africa, how appropriate. Dealing with 25 clubs, Pfann “most” permanent home was with F.C. Bad Kötzting in Germany’s third division, where he played 68 times. Today, after stints as a goalkeeper coach in Norway and Cuba, he works as a scout for TSG 1899 Hoffenheim from his homeland, role in which he can apply his extensive knowledge of planet Earth.
So, with the amazing odyssey of a German buccaneer concludes our travel. Some players will keep the pirate craft alive looking for adventures, others for money, for all them searching to endure the past of time in the Glory of football’s history.

PD: I would be surprise if in the near future I hear captain Pfann mentioned in a third party player’s ownership scandal, Aaaarrrrgggghhhh!