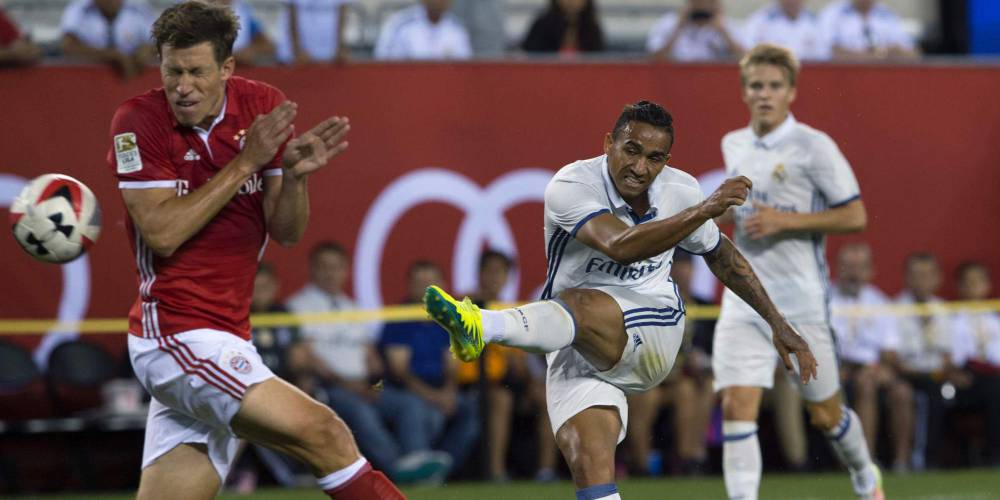 Brazilian fullbacks are certainly the most enterprising defensive players. They get forward with aplomb and always have an influence on the team’s attacking side of things. Brazilian right-back Danilo was the one, of whom big things were expected at Real Madrid, but it certainly hasn’t gone that way for the marauding defender since moving from FC Porto.

He usually plays second fiddle to first-choice Spaniard Dani Carvajal, who always puts in wholesome performances for the Los Blancos. Head coach Zidane is said to be fed up with Danilo’s inability to consistently challenge Carvajal for a starting spot. He has also been at the centre of a few defensive mistakes for the Los Blancos and some of the mistakes have cost the team big.

Thus leading to rumours that the Brazilian could be on his way out of the Santiago Bernabeu stadium in the summer. He has previous European experience with Porto, where he tasted Champions League football, so finding a club for him, to be loaned out to or sold, won’t be a tough deed for Real Madrid. He also has a valuable experience of playing for the Brazil National team, for whom he has 15 caps.

But his time at Real Madrid could come to an end soon and the club will look to bring in a reliable replacement to act as back-up to Dani Carvajal. Here are 3 options for Zidane to consider as replacements for the outbound Danilo –

The Portuguese right back is a very versatile player, being able to play in any position on the right side, either in an attacking sense or a defensive one. He has performed admirably following his move to Valencia from Benfica, which was initially a loan one.

His performances at the Mestalla haven’t gone unnoticed as the likes of Barcelona, Real Madrid and even a few Premier League clubs have laid their eyes on the marauding wing-back. Barcelona were even said to have agreed a deal to sign him in the summer, but any such suggestion could be premature and Real Madrid should look to hijack the deal and bring in Cancelo, who could be a very valuable addition to the squad.

Corchia is another one that is more of an attacking wingback. The 1 cap French International has been a hit at Lille OSC since moving from Sochaux. He is known for his prowess from dead-ball situations and also for his crossing.

He is another one that Real Madrid should look at, to act as a deputy to Dani Carvajal. Corchia certainly represents something of a different option to Carvajal and could certainly fit in well with the squad. He is a service-minded right back that likes to get to the by-line and put crosses in. Real Madrid would definitely be well served and another pro is that he could be a cheaper and alternative option to Cancelo. The acquisition of either of these two would be a short-term fix for Real Madrid. Both the Manchester City right backs will be club-less in the summer when their contracts with the club expire. Both are relatively aged, but have invaluable experience and good pedigree.

Sagna would like to bow out on a high, whereas Zabaleta will relish a return to Spanish football, where he enjoyed 3 successful seasons with Espanyol. Guardiola seems to be giving more and more younger players the first team responsibilities and that could spell the end of their Manchester City careers for both the right backs. Real Madrid would be better off spending the money on players elsewhere on the pitch and instead go for bargain buys such as Sagna or Zabaleta.