When you look at the Chelsea squad list, there is one overwhelmingly baffling thing about their player recruitment strategy.

They have a staggering 38 players out on loan. In some cases, this is an understandable strategy. They buy young players from around the world, send them out on loan and wait to see if they develop. If they do, but aren’t good enough for the Chelsea first team, they can sell them for a profit. But you would imagine the hope is that they develop to a standard that they can slot straight in at Chelsea when they are good enough.

But when you look at the gaps in the Chelsea squad and where they have signed back-ups it gets a bit confusing. They spent £24 million on Marcos Alonso who has made just four appearances for Chelsea despite having big money signing Rahman Baba and highly rated Kenedy out on loan.

The most baffling one, though, is that they were DESPERATE for defenders and are still being constantly linked with more. They have 6 defenders out on loan including the highly rated Andreas Christensen and Matt Miazga.

Born in Clifton, New Jersey, Miazga was a product of the Red Bulls academy. He soon graduated to the first team and the 6’4” American impressed immediately. He showed that he was impressive in the air and equally astute on the ground as he marked Spanish legend David Villa out of the game when the two come head to head. Importantly for Chelsea and his success playing for a top side, he is comfortable in possession.

“I’m not afraid of tackling opposing players, but I also like to play with the ball. I can initiate attacks with a series of short passes and also play a long ball straight to the striker. I’m not afraid of taking those risks. I’m always active when it comes to set-pieces too. I try to find a position to score, using my height and aerial ability. I can jump pretty well, so I’m definitely looking to add more goals to my resume.” said Miazga before his move to Chelsea. 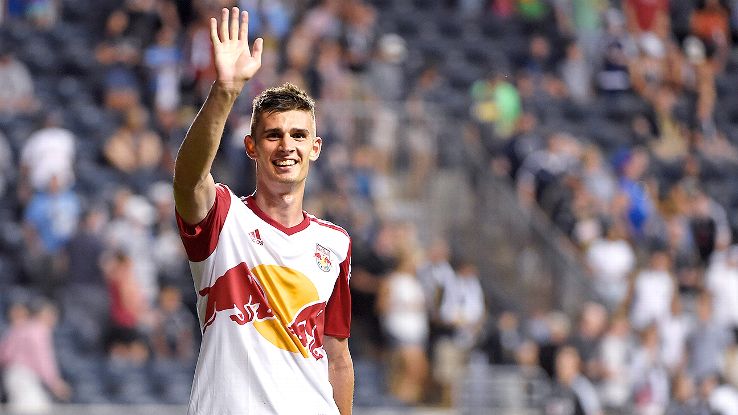 His quality was also recognized by USA manager Jurgen Klinsmann who gave him his full international debut last November. Miazga was born to Polish parents and had represented them at u18 level, but USA were desperate to get him to commit to their national team such was his quality.

‘It’s a huge move for him. Being 20 years of age, and now getting the opportunity to go overseas, and proving himself, is big,’ said the German.

‘It’s big I think for our programme, it’s big for us when a player moves to a Champions League team, a big team, a big club. We are happy for him, we are pleased, but we know also he is just developing.’

Perhaps his loan move to Vitesse Arnhem will help develop the American to the standard that Chelsea require of their first team players. But if you look at Tottenham they have American defender Cameron Carter-Vickers on their subs bench and making first team appearances quite often. Before this season, Miazga was ahead of Vickers in his development having played for the USA national team, whilst Carter-Vickers was only capped at USA u23 level.

So it will be interesting to see which approach to developing players is the most productive. Perhaps Chelsea needs to show a bit more faith in these young players and give them more of a chance.

Because let’s face it, it’s not like they currently have an abundance of defensive cover.