Newcastle United began their Premier League season with a fortuitous 1-2 loss at the hands of Tottenham Hotspur. Rafa Benitez’s men did very well to compete with a team in the top-four ranks of the Premier League, but fell just short of earning a deserved point.

The Magpies now travel to Cardiff to face a newly-promoted Cardiff City in search of first points. The Magpies will be looking to get the win to set their season up after a negative transfer window where they struggled to make profitable business in terms of quality.

Benitez did not start with new signings Yoshinori Muto and Salomon Rondon last Saturday but expect him to give the West Brom loanee a chance to prove his worth. Fortunately, he doesn’t have any injury issues to deal with, so almost the full squad will be available for selection, apart from the ones who are out for long-term.

The goalkeeper had no chance to stop either of Spurs’ goals and should keep his place as the No.1 this season.

With an injury scare to De Andre Yedlin, Manquillo might get a chance to start this time.

The captain will be responsible to hold the team together and lead them to their first win by securing a clean sheet at the back.

Clark was decent against Tottenham, so Benitez was vindicated for selecting him ahead of new signings Federico Fernandez and Fabian Schar. Expect Clark to start again this weekend, with new assets gelling into the team.

Newcastle are short in this department, so Dummett has to keep performing here to keep his team going.

He was unlucky not to score against Spurs and was dynamic in the midfield last Saturday. He is certain to start this game.

Shelvey’s passing range will always be a plus point for Newcastle in whichever game they play, so the Englishman will look to provide more key passes to the strikers.

Kenedy missed a big chance to equalise against Spurs, which would have really upset him. Apart from that, the Chelsea loanee did well down that left-wing. Expect him to start once again.

Perez was underwhelming last game, and has to improve to remain in the team.

Ritchie provided a lovely cross for Joselu to score last time around. He is the creator for the Magpies and will continue to be the one.

Read More: Signed for £6m: This South American could flourish under Rafael Benitez at Newcastle United

The Venezuelan played few minutes coming off the bench and looked a part. Expect him to be given the starting role ahead of Joselu. 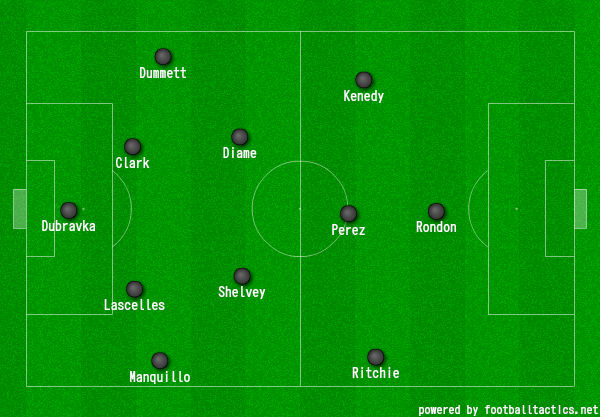