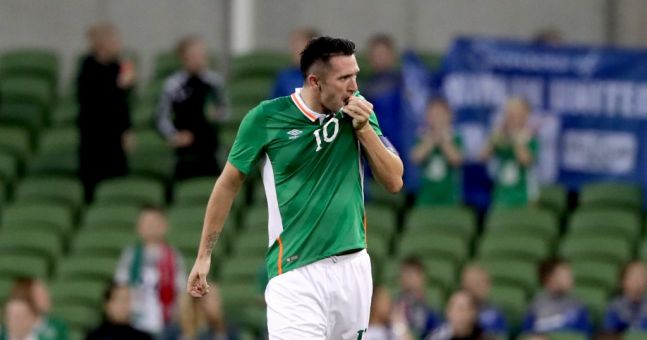 Footballers are a superstitious bunch, none more so than strikers. It’s a confidence game, toiling away up top, and when they find the back of the net they’ll make a note of what they were wearing and what they did before the game and an attempt to recreate the trick. Strikers will have lucky boots, lucky shin pads and lucky pants. They’ll have a pre-match ritual that probably involves eating the same food, saying the same prayer and touching the same part of the roof on the way out of the dressing room.

We wonder if that belief in luck exists even more in Irish players. There’s a long-standing association between the Irish and luck, hence the saying “the luck of the Irish”. There’s a whole culture of good fortune and happy blessings built up around Irish legend and myth; which explains the existence of Clover Casino, an online casino website, with a number of slot games based around the notion of lucky leprechauns, lucky rainbows and pots of gold. The whole notion behind the site is that if player feel lucky when they’re playing, they might win more.

With the combination of superior talent, the luck of the Irish, and a natural flair for scoring goals, Robbie Keane must have felt lucky every time he stepped out onto the pitch.

A couple of weeks ago, Robbie Keane hung his boots up for the last time and accepted the position of assistant manager of the Republic of Ireland, a nation he’s served with distinction for his whole playing career, under Mick McCarthy. He’d played his final game earlier on in the year, for ATK in India, where he spent a brief spell as player-manager. It felt like an inappropriate send off for a man who’d been a consistent goalscorer wherever he’d been.

Robbie Keane is nothing less than a legend. His goal to game ratio is impeccable; a record-breaking 68 in 146 games for his country, and 251 in 578 league games across the spread of all the clubs he played for in his long and distinguished career.

Keane’s name isn’t mentioned in the same breath as other highly regarded strikers of the Premier League era. Aguero, Shearer, Hasselbaink, Drogba, van Persie, Cole and even Anelka seem to get a star billing above Keane. Perhaps it’s the fact he never played for one of the traditional ‘big’ clubs, other than a brief cameo at Liverpool. When you look at the statistics though, it’s time we took a moment to stand back and appreciate what a sensational player he was.

As with many technically gifted players in England in the 1990s, he wasn’t immediately appreciated for his talents during the time of kick-and-rush. May feel that this was always the reason Paul Scholes seemed to be better respected on the Continent than he was at home. It was Inter Milan who seemed to notice Keane’s emerging talent as a young player first. He’d excited the crowds that had seen him as a teenager, electrifying the Championship as a teenager with Wolves and then catching the eye with Coventry City in the Premier League as a 20 year old, returning 12 goals in 31 appearances at a club that was never In danger of challenging for honours. That persuaded the Milan giants to part with £13m for his services – in the year 2000, that was a fortune, and all the more so for a teenager.

In truth, Keane’s big move didn’t work out. Marcello Lippi, the manager who signed him, was sacked just weeks after Keane’s arrival, and his replacement wasn’t an admirer of Keane’s abilities. Keane would soon be on his way back to the Premier League, having made just 14 appearances in Italy, scoring three goals.

Undeterred, Keane found himself part of the turn-of-the-century Leeds team that was making a big push for domestic trophies. They never quite achieved it, but Keane caught the eye in a side that includes Robbie Fowler, Nick Barmby, Jonathan Woodgate and an emerging Rio Ferdinand. Leeds, however, were a club that had spent beyond their means, and so Keane had to be sold after a season and a half to balance the books. That led him to Tottenham; the place where he really established himself.

It’s fair to say that Tottenham was very much Keane’s club. His time there may have been broken up by a baffling move to Liverpool which saw him sold back to Spurs less than six months after leaving, but between the years of 2002 and 2010 Keane made 238 league appearances, scoring 99 league goals, and many more in cup competitions. Keane went from boy to man at the club, becoming the side’s captain and talisman. The White Hart Lane outfit saw the best years of the Irishman’s career.

As things seemed to be drawing to an end for him, he got to indulge one more childhood passion; a loan spell at Celtic in 2010. As with many Irish boys, Keane had been a fans of the Glasgow giants as a child. Even if he was over 30 by this point, his touch hadn’t deserted him. Keane scored 10 goals for Celtic in 12 appearances, and left the fans wanting more. He could likely have stayed, but there was one more adventure in store for Robbie.

Making It In America

Ever since David Beckham joined LA Galaxy, the American club has been on the map as a stopping point for big names from the football world on retirement tours. Speaking purely from a footballing perspective, Robbie Keane did more for Galaxy than Beckham ever did.

He was supposed to be old and tired when he joined in 2011, but Keane stayed in Los Angeles until 2016, making 125 MLS appearances and scoring 85 goals. He made it well north of 100 for Galaxy in all competitions, and is generally considered to be the best marquee signing the MLS has ever seen. The game may be a little easier to play over there, but class is permanent, and Keane demonstrated it well into his mid 30s. When he eventually decided to leave, the league itself compiled a highlight video tribute to him, naming him as a legend of their division. Tributes don’t come much higher than that.

Robbie Keane never won the Premier League, the World Cup or the Champions League, but he won the hearts of the fans at every club he played for, and with his retirement, one of the greatest goalscorers of the modern era has been lost.