Everton looked to have done enough to secure a point but a mistake from Everton goalkeeper Pickford in the sixth minute of added time gifted the ball to Origi, who scored to spark wild celebrations as Reds boss Jurgen Klopp raced on to the Anfield pitch to celebrate before the match was over.

Everton produced an admirable performance and deserved to take at least a point away from Liverpool. They started the game very well and should have scored in the early minutes through Andre Gomes but the Portuguese headed straight at goalkeeper Alisson, who made the initial save from close range and centre-back Joe Gomez hooked the ball from the line after the follow up was nudged on target.

The Toffees sustained a flurry of pressure from the hosts but also had a couple of chances of their own to get their noses in front. Everton defender Yerry Mina sent his header past Alisson’s right post before Richarlison made an incisive run. After a one-two with Gomes, he lost his balance after escaping Virgil van Dijk in the box. 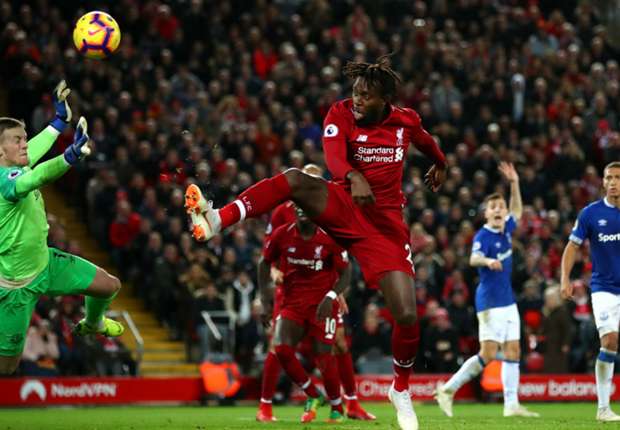 The visitors grew in confidence as Theo Walcott and Bernard terrorised the Liverpool full-backs, while Richarlison was a constant menace centrally. Gylfi Sigurdsson gave a glimpse of his creativity when he sent a brilliant reverse pass to Walcott ten minutes before the break.

Walcott’s first touch took him beyond the onrushing Alisson but he couldn’t keep his balance and sent his shot harrying over the byline.

Liverpool also had their chances, most notably Xherdan Shaqiri, who was put clean through by Mohamed Salah after Roberto Firmino robbed Idrissa Gana Gueye. But Pickford was not to be outdone and denied the Swiss international.

Both sides appeared to have run themselves into the ground over the first 60 minutes as the tempo dropped and play became scrappier. Three minutes from time, substitute Divock Origi had a chance to win it for Liverpool but rattled the crossbar from two yards out. 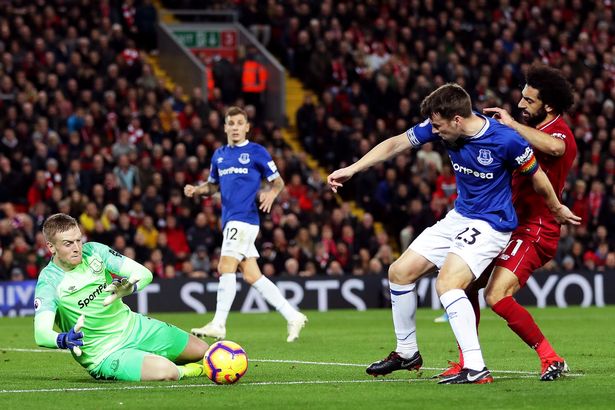 However, Origi poked home the winner from close range in the sixth minute of stoppage time when Pickford failed to deal with Van Dijk’s looping half-effort.

Read more: Everton would strike gold if they splash the cash on this top-class £40m Ligue 1 star in January

Frustrated with the manner of Liverpool’s goal and of course with the final result, here is how some Everton fans reacted.

Robbed again ! We should be used to that tho 🙄

Didn’t deserve that. Something I didn’t think I’d say a while ago #COYB 🔵

Heads up blue boys, that score does not reflect the performance.

Unlucky boys. Not the result you deserved. Bring on the rematch in March. Funny old game.

We have played well at Arsenal, Utd, Anfield & The Bridge this season and didn’t deserve to lose at any of them! Jordan made a mistake but he is a great keeper and will learn from it. Gomes was class! Sign him permanently! 🔵 💙#EFCmatchday

Still early days & the Everton re-build is well on track. Undeserved result but the signs look good & a striker is top priority. Richarlison is still better on the left & i’m 100% convinced he’ll play on the left & Lookman wide right on Wednesday evening. DCL or Tosun up front?