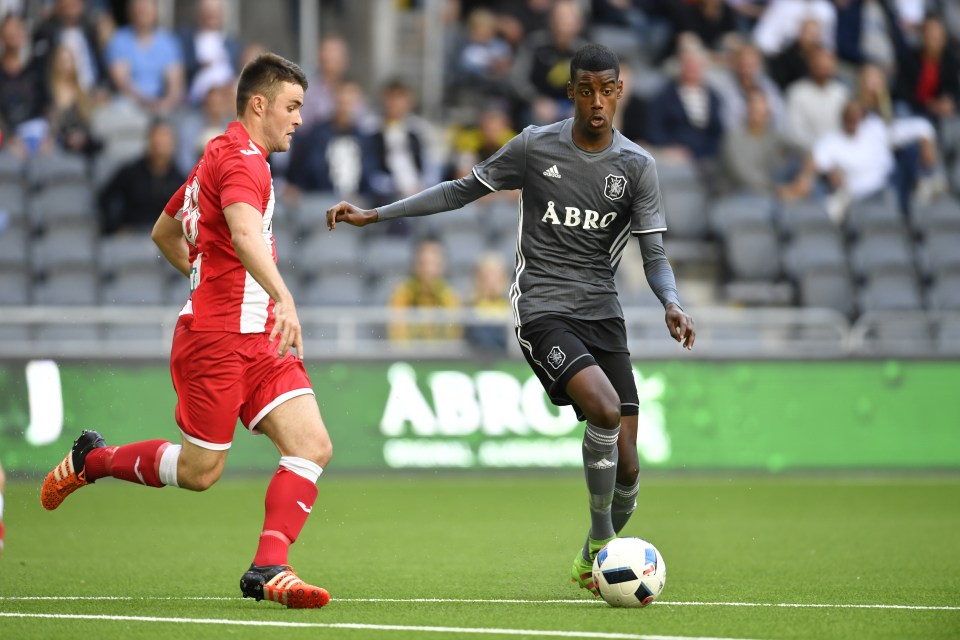 Alexander Isak is the latest teen sensation who has taken the footballing community by storm. The 17-year old striker, who is being dubbed as the next Zlatan Ibrahimović, plies his trade in the Swedish Allsvenskan for AIK Football and at such a young age, he has managed to garner serious interests from all the top European clubs with his impressive performances.

Who is Alexander Isak?

Isak, making his first team debut for AIK in February this year, went on to score in the game and in the process, became the youngest player to score for his team. And he has continued on his merry ways ever since, racking up 11 goals in 26 appearances for the club.

The Swede stands tall at 6ft 3in and has highly impressive physical attributes for someone so young and also possesses great technical abilities – leading to the comparison with Zlatan. Isak has shown for AIK that he can lead the line on his own, that he is adept at holding up play and can also beat defenders with his turn of pace.

For someone so tall, Isak also has a great first touch and dribbling ability with the ball. He has shown a tremendous amount of calmness and composure in front of goal, that belies his age. So, it comes as no surprise that he is been compared with the Swedish legend and his been linked with a move to European heavyweights.

One of those clubs interested in the 17-year old striker is Arsenal. The Gunners have an extremely rich history of blooding young players. The likes of Cesc Fabregas, Theo Walcott and more recently Alex Oxlade-Chamberlain, Hector Bellerin and Alex Iwobi have received a strong backing from the manager Arsene Wenger at young ages and have gone on to develop leaps and bounds under the Frenchman’s guidance.

So, it hardly comes as a shocker that Arsenal have shown interest in a highly talented Isak. Especially with reinforcements needed in the striking department, Wenger will be keeping an eye out for the 17-year old. Olivier Giroud has been in good form in front of goal off late, scoring four in four games. But he has shown in the past that he can be highly inconsistent and erratic. Apart from the physical aspect that he brings, there isn’t much to his game. While he is instinctive inside the box and can head the ball with immense power, the Frenchman doesn’t offer the running that someone like Isak could bring to the table.

Having joined Arsenal ahead of the 2012-13 season, after finishing as leading goal-scorer for Montpellier in the French League, Giroud has managed to score 86 times for the Gunners in almost 200 appearances.

Compare that to the main striker of a rival club, say Sergio Aguero of Manchester City, the Argentine has scored 150 goals for the Citizens having arrived a season before Giroud. Aguero had been the main catalyst in City’s two title wins in the 2011-12 and 2013-14 seasons.

A difference of thirty odd games and almost double the number of goals. Good enough for the main striker? You be the judge.

Isak in, Giroud out?

With Giroud turning thirty a few months ago, his value will continue to fall and if rumours are to be believed, he has grown frustrated at his bit part role in North London. Having hardly featured for the Gunners this term, an exit from Emirates seems more likely every day.

So, bringing in someone like Alexander Isak might turn out to be a good piece of business for Wenger and Arsenal, as the Swede has shown he can lead the line by himself. He can offer a threat aerially and at the same time has the ability to go past defenders, which Giroud lacked. The Swedish League is very physical in nature and having toughed it out there, Isak could get used to Premier League sooner than many would expect.

And joining a club like Arsenal, where youth is encouraged constantly and given regular opportunities could prove to be an attractive proposition for young Isak as well.

With major clubs circling around Isak, Arsenal should move quickly to secure the teenager as the deal would benefit both the parties involved. And judging by his performances so far, there is no doubt that he is the next big thing that could well be a perfect replacement for Olivier Giroud.