Every day a different suitor seems to appear for those talented players that don’t seem quite comfortable on their current side, as everybody tries to make the most of that situation and make a run at the talented guy in order to improve their side.

One of the guys who has been linked with almost every single big side in the world since the start of the current season was Real Madrid’s star Isco, who doesn’t look completely settled for Zidane’s squad and everybody thinks that should get the hell out of Santiago Bernabeu as soon as he can.

Isco has featured a lot of times for the French boss this year and is clearly favoured over Colombian star James Rodriguez, who doesn’t seem to be on Zidane’s plans at all, but even despite the steady playing time he’s had over the past few weeks, it’s been hard for him to find consistency or even settle for a single position on the field.

On top of that, apparently renewal talks between the talented 24-year-old and Florentino Perez have stalled and he’s set for an uncertain future, so dealing him now would make a lot of sense for the Merengues if they want to get something out of him while they still can.

So, it’s only natural to think that most Premier League squads will be looking to add Isco to their teams in order to boost their championship run, and he’s already been linked with Manchester United, Liverpool and more strongly Mauricio Pochettino’s Tottenham Hotspur. However, it seems like a new frontrunner has emerged over the past few weeks, and that’s Antonio Conte’s incredible Chelsea. But, should they actually make a run at him? Let’s take a look at the facts. 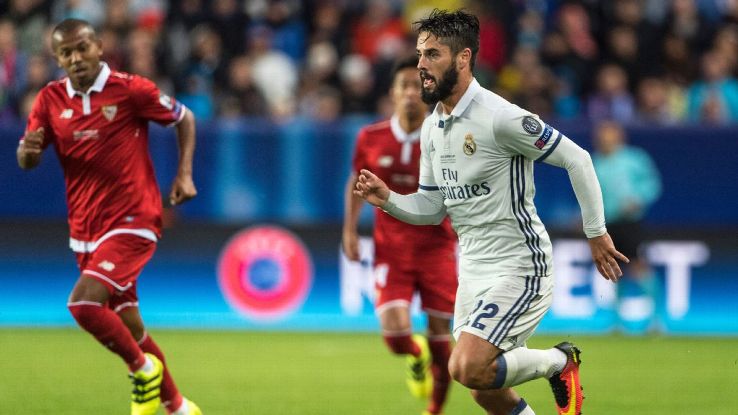 Chelsea’s currently sitting at the top of the Premier League table right now, so you know this team isn’t exactly struggling, and that championship calibre team could lure a great player like Isco to their squad.

However, even good things can be great, and Isco would definitely improve their offence, and that’s something you just can’t overlook. On top of that, Isco’s still very young and has a lot of football to offer, so he could become a new ‘Juan Mata’ for the blues for many years to come.

Besides, it’s very clear that Oscar and Cesc Fabregas are not in Conte’s plans, and even if they do, they don’t seem to fit in the scheme Conte deploys, so Isco wouldn’t have to battle almost anyone for minutes at Stamford Bridge.

Nevertheless, Isco should be aware of the fact that he’ll probably be sent off the bench during this second half of the season if he decides to sign for the blues, as Conte’s side seems complete for the time being, so he’ll find it difficult to start right away for the Italian coach.

Isco is an extremely talented and versatile player with an outstanding offensive talent and a restless will  to help his team, so everybody should try to get him, and we believe he could be a great success at Stamford Bridge.