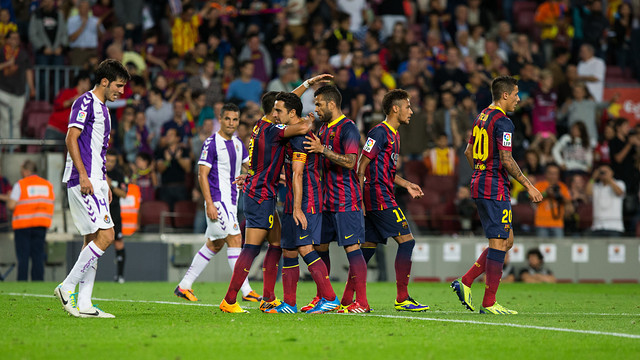 Barcelona gifted Atletico and Real Madrid with a disappointing game in Valladolid where they were beaten 1-0 by the home side. The 4-1’s victory of the last week against Almeria had given Barça the opportunity to reduce the gap with Real Madrid to just one point and Blaugrana were expected to carry on their duties in a ground that older supporters have emotionally in mind as it was here that Barcelona mathematically won the 1984/85’s Liga thanks to the keeper Javier Urruticoechea, who saved a late penalty.

This time Catalan supporters wouldn’t  remember gladly Valladolid’s stadium José Zorrilla. Barcelona lost against a team who is fighting to avoid relegation and that had won just four games before Saturday. Meanwhile, Atletico Madrid 2-0 ‘s victory in Vigo against Celta means that Colchoneros are now second in the table and still in the race. Given the absence of Diego Costa, suspended, David Villa led the attack scoring twice.

Knowing both results, Real Madrid defeated Levante easily. In another ruthless game form Ancelotti’s side, Cristiano Ronaldo – who scored the opener – mustered his 24th seasonal goal, 38th if we included Copa del Rey and Champions League in the tally. Marcelo and an own goal from Levante’s Nikolaos Karabelas completed the scoreline before an injury occurred  to Dani Carvajal – still unknown the entity – ruined partially the feast.

Real Madrid look stronger by each passing week, while Barcelona have started to creak: in 2014 Barcelona have gathered just 17 points among 30 available. Real Madrid, meanwhile, have conquered 26. If Ancelotti began the campaign with many questions to answer, now is Gerardo Martino the man in the dock. Their roles have been inverted.

Two weeks ago, Barcelona’s defeat at Anoeta against Real Sociedad was labelled as a Gerardo Martino’s defeat. The fact the Argentinean coach rotated the squad appeared the main cause and after many criticisms, Martino decided to play the best players against Almeria and Real Valladolid.

However, the turn-over has not been the reason of the last blow. The best players – a part from Andres Iniesta – were on the field in Valladolid but suddenly they all together were out of tune. The hosts took an early lead through the Italian Fausto Rossi but Barcelona were unable to impose their game : no pressing, lack of intensity, too many balls lost. And another bewilder statistic said that in the last six away games, five times they conceded the first goal. It happened against Getafe, Levante, Sevilla, Real Sociedad and now with Real Valladolid.

The recent performances have raised doubts and an incessant search of the guilty. Martino have been charged with the accuse of not understanding the “way of winning” set by Pep Guardiola and, even when results were good, he was often questioned.

However, the reason may be simpler: cycles always come to an end. Barcelona is still a powerhouse but sooner or later aged players will go towards their decline. While once Xavi could play 40 games at season at his top, now he cannot offer any longer the identical quantity. And the same could be said for Andres Iniesta, Lionel Messi and Dani Alves, without mentioning that mainstays like Victor Valdes and Charles Puyol will leave next summer and the club have not found yet the proper replacements.

In the past a bad performance from a single could be hidden by a team effort. At this moment, when it happens, it seems that they switch off all together leaving the rest of team with a sense of impotence.

Naturally the season is not finished yet. Barcelona are still in Champions League and the 2-0’s away win at Eithad is a result that Manchester City unlikely could overtake. Going through the completion may boast the confidence but in order to win the domestic league they need absolutely a victory at Santiago Bernabeu on  March 23rd , before another epic battle between the two Spanish giants, the Copa del Rey’s final scheduled on April 16th.