Rangers face a visit to the Global Energy Stadium to face Ross County on Wednesday in the Scottish Premiership.

Steven Gerrard’s men hosted Motherwell at the weekend and emerged as 2-1 winners, thanks to goals from Jermain Defoe and Filip Helander. They must now quickly turn their attention to a trip to Ross County.

Ross County are enjoying a strong season in the Premiership this term, but coming up against Gerrard’s men will be one of their toughest tests to date.

Brandon Barker went off injured before half time against Motherwell and is likely to miss the upcoming game.

Jordan Jones has been out of action with a knee injury since the middle of September and is expected to miss out again. Andy King has a muscle problem and remains highly doubtful for the midweek fixture.

McGregor is the club’s first-choice goalkeeper and should be in goal for Wednesday’s game as well.

Tavernier missed another penalty this season, this time against Motherwell at the weekend. However, he redeemed himself as his corner-kick fell perfectly to Helander, who scored the winner with a diving header.

Goldson is probably one of the first names on the team sheet. He is certain to start on Wednesday.

Helander scored the winner against Motherwell at the weekend. Due to his towering presence, he’s an asset in both the boxes.

The left-back has been starting games on a regular basis now. He is expected to keep his place in the team against Ross County.

Stewart couldn’t make an impact against Motherwell but will be given a chance to impress in the upcoming game.

Davis has been a regular fixture for Rangers since the start of the season. The experienced midfielder will look to control the tempo of the game from the first minute.

Aribo is a technically solid midfielder who will look to cause problems for the Ross County defenders with his late runs in the box.

Arfield is an energetic presence who can play in different positions across midfield and attack. He’ll certainly start on Wednesday.

With Barker expected to miss out with a shoulder problem, Kent could be handed a start. The jet-heeled winger has had a start-stop season so far but he’ll look to make a difference at Ross County.

Scored an instinctive goal against Motherwell on Sunday, thus justifying his selection ahead of Morelos. Defoe will lead Rangers’ attack on Wednesday as well. 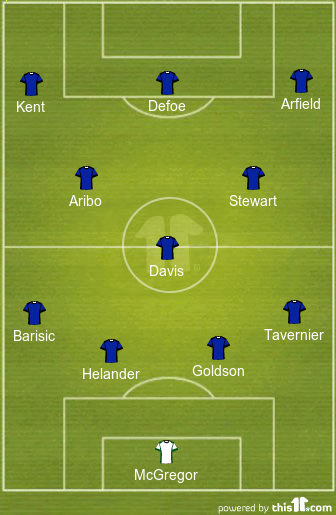