Rangers travel to Almondvale Stadium on Sunday to face Livingston, hoping to make it three wins on the bounce in the Scottish Premiership.

The Gers enjoyed a wonderful European night in midweek as they beat FC Porto 2-0 at the Ibrox, with Alfredo Morelos and Steven Davis scoring the goals. Now they’ll quickly need to turn their focus on the league and shift more pressure onto Celtic when they face Livingston.

Livingston defeated Celtic earlier in the campaign despite their poor form, so Rangers will need to be wary of the hosts on Sunday.

Rangers have no new injury problems ahead of Sunday’s game.

McGregor is Rangers’ undisputed No.1 and should start on Sunday.

Tavernier will have to be at the top of his game to keep the Livingston forwards at bay.

Goldson is probably one of the first names on the team sheet. He is certain to start on Sunday.

The Swede put up a strong display against Porto at the Ibrox on Thursday and he’ll be keen to produce something similar at Livingston.

Jack has been in excellent form in recent weeks and Rangers will need him to put in a solid shift in the middle of the park once again to stop Livingston.

Davis has performed extremely well since the start of the season and there is no way he is going to be benched for this one.

Kamara had a solid game in midfield against Porto. The Finn will be looking forward to continue his impressive form this weekend.

Arfield is a versatile player who can play in different positions across the frontline. He will start on the right flank against Livingston.

Kent has been unfortunate with injuries this season but now fully fit, he’ll be looking to make an impression and repay his manager’s faith.

Morelos is in red-hot form for Rangers and scored in the 2-0 victory over Porto at the Ibrox. He’ll lead the Gers attack at the Almondvale Stadium. 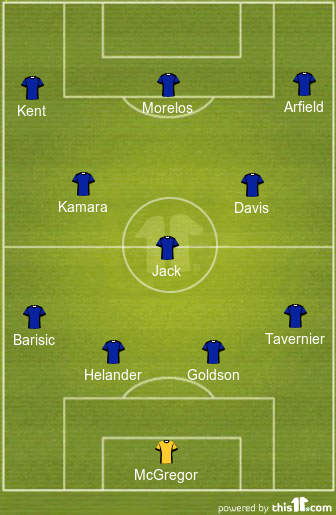