Rangers resume their Scottish Premiership duties on Sunday when they travel to Tynecastle Stadium to face Hearts.

The Gers went top of the table before the international break with a thumping 5-0 victory over Hamilton at the Ibrox, with Jermain Defoe scoring a hat-trick. They’ll be looking to make it five wins in a row at the weekend.

Hearts, meanwhile, have just won once in their last five games and will come into this contest on the back of a 1-0 defeat to Kilmarnock.

Ryan Kent was expected to return after the international break and the good news for Rangers is that it seems the winger is on course for that, although the game at Hearts is likely to come too soon.

Jordan James remains a doubt while Jon Flanagan is expected to be out for some time after hernia surgery.

McGregor is the first-choice keeper in this team and he should be in goal on Sunday.

Tavernier had a good game against Hamilton and will retain his place in the team.

A rock at the back, Goldson has been a regular fixture in Gerrard’s side. He should keep his place in central defence.

Edmundson was handed his first league start against Hamilton and he impressed, helping his team keep a clean sheet. He is a certain starter for the upcoming game.

Barisic scored a wonderful free-kick in the 5-0 victory over Hamilton last time out. The Croat will start at left-back on Sunday.

Kamara has established himself as a key player under Gerrard. The Finland international is expected to start in central midfield against Hearts.

Davis’ experience and calmness in midfield allow Rangers’ attacking players to produce the goods in the final third whilst also protecting the back four.

Stewart has seized his opportunity in Kent’s absence, impressing with his exciting displays. He is a certainty to start at Tynecastle.

Arfield acts as a link between the midfield and the attack. The Canadian should start in the No.10 role.

With his pace and directness on the ball, Ojo can be a menace for the Hearts defenders.

Following his sublime hat-trick in the win over Hamilton, Defoe is highly likely to lead the Gers attack on Sunday. 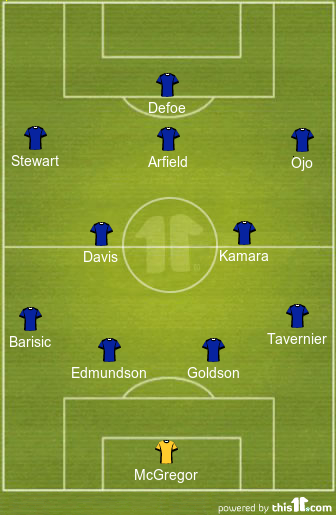