Rangers face a trip to Hampden Park on Sunday hoping to beat Hearts in the Scottish League Cup semi-finals.

The Gers are in an excellent run of form and come into this game on the back of a 4-0 thumping of Ross County. The win on Wednesday saw them stay second in the league, level on points with Celtic but behind their rivals, having scored one goal lesser.

However, Steven Gerrard needs to shift his focus quickly towards Hearts, who are in a wretched run of form having won just once in the last five league games.

Allan McGregor missed the victory over Ross County but he is expected to recover in time for the upcoming fixture. Ryan Kent and Brandon Barker are also in line to return.

McGregor should return in goal for Sunday’s League Cup semi-finals, having missed the midweek victory over Ross County.

A high-flying right-back, Tavernier offers a lot to the team and is a key player under Gerrard.

Goldson is probably one of the first names on the team sheet. He is certain to start on Sunday.

Alongside Goldson, Helander helped Rangers keep a clean sheet against Ross County. The big Swede deserves to keep his place in the team.

Barisic seems to have put the injury woes behind him. He is expected to keep his place in the team against Hearts.

Scored a brace against Ross County and controlled the tempo of the game very well. Jack is a certainty to start on Sunday.

Kamara has established himself as a key player under Gerrard. His energy and intensity could make a difference for the Gers on Sunday.

Aribo shone with a brace of assists against Ross County on Wednesday. He’ll complete the Gers’ midfield trio.

For such a big game, Arfield’s experience would be vital. He’ll start on the left flank against Hearts.

Ojo, on loan from Liverpool, has blown hot and cold this season. He needs to step up and deliver the goods on Sunday.

Morelos hit a brace in the 4-0 battering of Ross County to continue his excellent form this season. The stocky Colombian will lead the Gers’ attack against Craig Levein’s side. 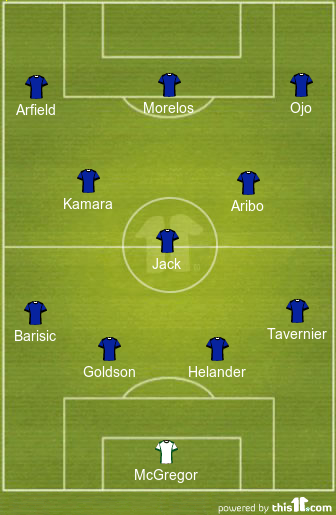