Rangers lock horns with Hamilton at the Ibrox on Sunday as Steven Gerrard aims to bounce back from the Europa League defeat to FC Young Boys.

The Gers had themselves to blame in Switzerland, losing from a winning position against Young Boys. A victory on Thursday would have taken Steven Gerrard’s side to six points in the group.

Gerrard will expect a reaction from his boys against Hamilton, who have won just once in their last five outings in the Scottish Premiership.

Ryan Kent remains a doubt but Jordan Jones should be back after the international break. Joe Aribo will miss a couple of games due to a head injury he had suffered in the Betfred Cup quarter-final.

Meanwhile, Jon Flanagan has had hernia surgery and is expected to be out for some time.

McGregor is the first-choice keeper in this team and he should be in goal on Sunday.

Tavernier made two costly errors at the back against Young Boys that resulted in Rangers’ defeat on Thursday. The skipper will be mightily disappointed with his display and should look to redeem himself with a strong performance on Sunday.

Goldson is one of the first names on the team sheet. That should be the case on Sunday as well.

Katic was an unused substitute in the 2-1 defeat to Young Boys. He’ll walk back into the team against Hamilton.

Barisic has had injury problems at the club that hasn’t allowed him to be at his best. However, now that he is back to full fitness, he’s set to keep his place at left-back.

Jack is one of the certain starters in the team. He is expected to keep things tight in the middle of the park.

A good passer and a tireless worker, the experienced Davis will look to control the tempo of the game from the onset on Sunday.

Stewart scored in the 5-0 rout of Aberdeen last weekend. He could be handed a start against Hamilton.

With his pace and directness on the ball, Ojo can cause trouble to Hamilton defenders at the Ibrox.

The experienced Arfield adds a different dimension to the Gers attack. He should start on the left flank.

Morelos just cannot stop scoring goals at the moment for Rangers. He’s an undoubted starter against Hamilton as Gerrard looks to grab all three points. 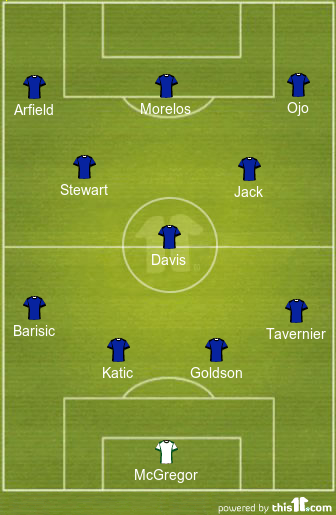