Rangers are back in action as they welcome Stranraer FC at the Ibrox in the fourth round of the Scottish Cup.

Before the winter break, the Gers ended their Celtic Park hoodoo and landed a psychological blow to Neil Lennon’s side, trimming the gap to two points with a game in hand. They are looking strong in the Premiership and are aiming for the first trophy under Steven Gerrard.

Having narrowly missed out on the Betfred Cup after losing to arch-rivals Celtic in the final in December, Gerrard and his team must aim to win the Scottish Cup this term.

Filip Helander got injured in the League Cup final defeat to Celtic last month and it could well take some time before he gets close to a return.

McGregor has been in brilliant form between the sticks this season. He would retain his spot as he is the first choice.

The skipper has always been impressive going forward and contributes to the team’s attacks. A key member of the squad, Tavernier will start at right-back.

The Croatian scored the winner against Celtic last month and did well. He should continue in central defence.

Goldson has been a regular fixture throughout the season, so Gerrard can afford to give him some rest and hand a start to George Edmundson. A summer signing from Oldham Athletic, Edmundson must grab the opportunity with both hands.

Flanagan is in need of game time, having played just seven games so far this season. He could be handed an opportunity at left-back.

Kamara has been one of Rangers’ best players this campaign and should start in the midfield against a lowly Stranraer FC side.

Jack has often been used in an advanced role this season but he could find himself in a deeper position on Friday in the Scottish Cup.

Capable of making runs from deeper positions rather than playing with his back facing the goal, Arfield seems to have found his mojo back.

Barker has failed to impress since joining Rangers this past summer. Against Stranraer FC in the Scottish Cup, he could be handed a start, though.

On loan from Liverpool, Ojo impressed in the friendly fixture against Lokomotiv Tashkent at the Dubai Sevens Stadium last week, contributing a goal and an assist. He should be handed a start in the fourth round of the Scottish Cup.

With 14 goals in all competitions this season, Defoe is likely to be given the nod to lead the Rangers attack against Stranraer FC on Friday. 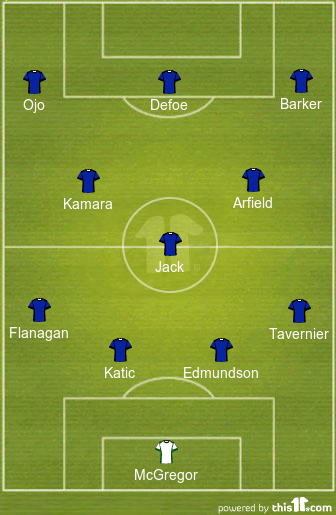