Another week of Spanish La Liga action is past us and it turned out to be quite an eventful one. Sergio Ramos’ late header made sure Madrid left Camp Nou with a point against fierce rivals Barcelona while Valencia’s winless run continued as they were held to a 2-2 draw by Malaga.

Atletico could not break down a resolute Espanyol defence and that match ended in a goalless draw, while minnows Leganes held Villarreal to another goalless draw. Elsewhere Granada recorded their first win of the season, defeating Champions League hopefuls Sevilla 2-1, while Deportivo La Coruna emerged out of the relegation zone in style, with a crushing 5-1 victory over Real Sociedad.

There were plenty of goals, stunning saves and some brilliant individual performances, so let’s take see who makes it to our La Liga Team of the Week for game week 14:

Made a string of saves against Atletico Madrid as Espanyol held on to a 0-0 draw at the Vicente Calderon. It was his fifth consecutive game without conceding in the La Liga.

His stock continues to rise as the Espanyol youth academy product continued his good run against a feared Atletico attack. Balanced both defensive and attacking duties very well. 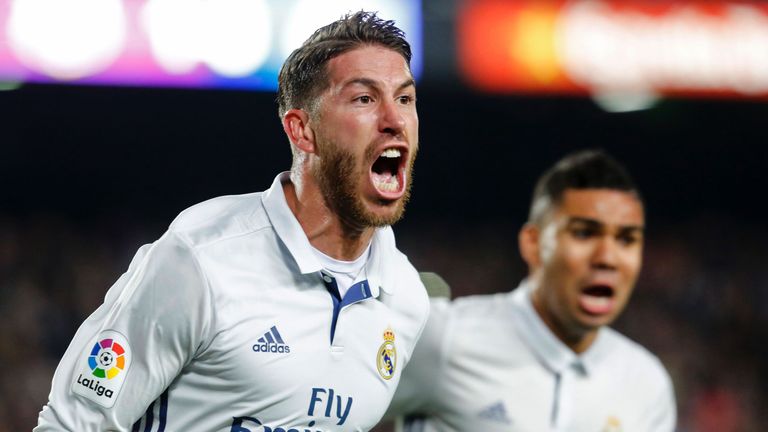 Led from the front in the heart of Real Madrid’s defence, putting in some crunching tackles throughout the night. Made sure Barca did not walk away with all three points as he thumped in a trademark header late in the game to equalise for Madrid.

Opened the scoring for Deportivo against Sociedad with a calm low strike early in the first half. Did well to thwart the Sociedad attack for the entirety of the game.

Had a good outing at right-back as Sporting Gijon restricted Osasuna just to two shots on target throughout the match. Got himself on the scoresheet to give his team a 2-0 lead in the second half.

Was a constant thorn in Eibar’s defence, running at them relentlessly. He managed a match-high 7 successful dribbles past his opponents out of the 7 he attempted. Capped a wonderful performance with a goal in the dying minutes of the game. Fornals opened the scoring for Malaga with a thumping volley in the third minute before scoring a late leveller to give his side a 2-2 draw against Valencia. Malaga’s saviour on the day.

The 27-year old was brilliant for Celta against Real Betis as he set up Iago Aspas for Celta’s opener, before putting in a delightful cross for Facundo Roncaglia to head home to make it 3-3 for the Os Celestes.

His double strike against Osasuna gave Sporting Gijon their first win since September, putting an end to an 11-game winless streak. Scored from a header in the first half, before doubling his tally with a neat lob in the second period.

Scored two goals for Celta Vigo in their 3-3 draw against Real Betis. Has scored 9 times in the season now and is Liga’s second leading goalscorer behind Cristiano Ronaldo.

Grabbed a double in Deportivo La Coruna’s 5-1 win over Real Sociedad to help his team out of the relegation zone.