Another week of action-packed Premier League is past us and what an eventful week it was. Leicester City, struggling this season, surprised everyone as they thumped Pep Guardiola’s Manchester City 4-2, whereas Manchester United finally broke their run of draws with a 1-0 win over Tottenham Hotspur. Liverpool were held to a 2-2 draw by West Ham while Chelsea won 1-0 against Tony Pulis’ West Brom. It was a bit of a goal galore as Watford defeated Everton 3-2 at the Vicarage Road, while Burnley came out trumps over Bournemouth with a result of 3-2 and Hull City and Crystal Palace played out a 3-3 draw. Elsewhere, there were wins for Arsenal, Swansea City, Southampton as well.

Lots of goals, surprise results and some solid performances. Let’s take a look at who makes it to our Team of the Week for Gameweek 15:

Tottenham’s bright light on an otherwise dull evening at the Old Trafford as he made many stops to deny United from increasing their lead. The Frenchman was very impressive on the evening and was praised a lot by United manager Jose Mourinho. When that happens, you know it was a class performance.

Made his much-anticipated return from injury as he replaced an injured Shkodran Mustafi on 25 minutes and was excellent, to say the least. Defended really well and extremely effective going forward. He set up Theo Walcott’s goal helping the Gunners to equalise the score. The Englishman, ever since his return, has been a rock for United. And it was another extremely solid performance by Jones against Spurs. He was not afraid to put his body on the line as he bravely dealt with countless crosses in the box, and did not give Harry Kane an inch. His passing was also very good.

Nullified Kelechi Iheanacho completely with his imposing presence at the back. He was also involved in Leicester’s first two goals. It was his header from the back that Mahrez released Slimani from, who in turn set up Vardy for the opener. Huth was involved again, as he flicked a header to Slimani from a corner, which the Algerian served up to Andy King to hit home. Always a nuisance from set-pieces.

Did some very good things at left-back. Grabbed two assists as he hit in two delightful crosses for Sebastian Prodl and then Stefano Okaka to score from. Brilliant display by the Greek.

Another typical energetic performance from the Spaniard in the middle of the park for United. Brilliant in both defence and attack as he ran around hounding the Spurs players. Summed up his entire display with an assist for Mkhitaryan’s goal, as he won the ball deep inside his own half, before opening up the Spurs’ defence with a brilliant pass.

The Iceland international has been one of the few positives for Swansea this season and it was nothing different against Sunderland. The former Spurs man scored the opener from the penalty spot, before setting up the second goal for Fernando Llorente as the Swans ran easy 3-0 winners against David Moyes’ side.

The Armenian’s class was on full display at Old Trafford against Pochettino’s Spurs side. His attacking intent was visible each time he was on the ball. Scored the only goal for the Red Devils with a thumping finish from the edge of the box in the first half. His defensive game also has seen a great improvement. United look a different team with him on the pitch. Unfortunately, was injured late in the game. 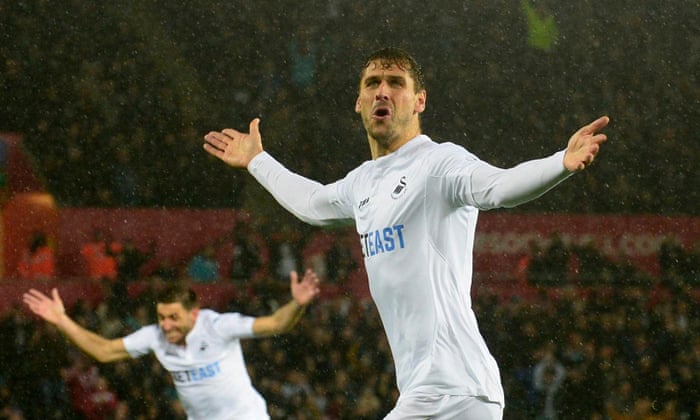 Scored twice for Swansea against Sunderland as the Welsh team won 3-0 and moved out of the relegation zone. Turned in a Gylfi Sigurdsson corner past Sunderland goalkeeper to make it 2-0, before hitting in a powerful strike from a Jefferson Montero cross to make it three.

Stefano Okaka scored two goals for Watford against Everton as the Hornets won 3-2. The back-heel shot for his first goal in the 36th minute was delightful, to say the least, before he headed in Watford’s third in the second half to put the game to rest.

Jamie Vardy is back and how! The Englishman ended his 10-game drought with a brilliant hat-trick against Manchester City, taking us back down to the memory lane to last year where he decimated defences that came up against him. Scored twice in the first half, following some quick counter-attacks, and hit home his third late in second half to pile up the misery on Guardiola and City.