This team intends to shed light on those players outperforming their teammates outside of the Premier League’s elite teams.  Players from United, City, Chelsea, Arsenal, Spurs, Everton and Liverpool are therefore ineligible for selection. Furthermore, a general prerequisite to qualify is that players need to have played throughout the entire season (apologies to Le Newcastle’s January parade).

I’m aware of how subjective this is- picking some of these positions was incredibly difficult, and I’m sure some worthy players, in the eyes of some, may have missed out.

Finally, this team seeks to be tactically balanced- if these players were picked together, you would expect them to gel.  That would explain the midfield combination of two relatively defensive players, and a deep lying striker combined with an out-and-out goalscorer.

Perhaps one of the hardest positions to decide- Asmir Begovic and Jussi Jääskeläinen were both in with a shout. Jääskeläinen actually boasts the best goalkeeping stats of the three (only just), but Mignolet takes his place in the team based on Sunderland’s ropey defence and his assured performances during the adversity of relegation. Reliable, an excellent communicator and a fantastic shot stopper, Sunderland will do well to keep him, with Arsenal rumoured to be interested.

One of Lambert’s brave defensive youngsters, signed from Sheffield United for £3 million last summer. Other than the two ‘worldy’ volleys he scored from outside the box against Swansea and Stoke, Lowton is fantastic going forward and is looking like one of the more technically adept full backs in the league, especially with regards to his crossing. He’s started all but one of Villa’s matches this season, and his ability as their leading interceptor (2.9 per game) illustrates his shrewd intelligence off the ball.  Bags of potential here, and a constant threat down Villa’s right flank.

Outside of the top 7 Swansea, West Ham and Stoke have boasted the best defensive records this season. The first central defensive spot was a toss up between Chico and his highly rated, Liverpool-linked, partner Ashley Williams.  Chico gets the nod for what has been an outstanding debut season, not just for his defensive efforts, but his excellent ball-playing skills too, a perfect fit for both manager Michael Laudrup and Swansea. The Spaniard has been the teams leading tackler (3.4 per game), and interceptor (3.5 per game), and his overall contribution to Swansea’s season has been invaluable.

The New-Zealander has had an excellent turnaround at Upton Park having not been a consistent starter in his first season during the 2010/11 season. An adept tackler with impressive concentration levels, Reid has been a rock for the Hammers, starting all but 2 of their league matches this year.  At the tender age of just 24, he looks a decent asset for the future.

A bright spark in what has been a disappointing season for the Black Cats, Danny Rose will be missed at the Stadium of Light when he returns to Spurs at the end of his loan deal.  Like Lowton on the opposite flank, Rose perhaps stands out because of his technical strengths, and his forward surges have often been a rare piece of inspiration in a blunt Sunderland attack. In similar fashion to Gael Clichy, Rose’s excellent anticipation skills make him a decent interceptor of the ball too.  His goal against Villa was a just reward for an impressive season, and best illustrates his ability to cause problems when surging forward.

Snodgrass’ value to Norwich has already been discussed in depth on this blog, but the Scotsman has been integral in providing some attacking creativity to Norwich’s often tedious style of play.  Adept (like most wingers) at playing on either flank, Snodgrass is excellent from dead ball situations  and has also had the positional intelligence to mold into Norwich manager Chris Hughton’s desire to play with two rigid banks of four.  Perhaps not the quickest, most direct winger, but intelligent and hard working.

Perhaps one of the most underrated defensive midfielders in the PL, Schneiderlin’s contribution to Southampton’s survival can in no way be understated.  Stats wise, defensive contributions can be measured by interceptions and tackles, with certain players usually dominating one of these areas based on a team’s style of play.  It is extremely rare to see a player profoundly dominate both of these stat sectors across the entire league but Schniederlin has achieved this, averaging 4.1 tackles and 3.9 interceptions per game, across 35 appearances. A combative, proactive player, the Frenchmen has thrived under Mauricio Pochettino’s strategy of heavy pressing and retaining possession, and is one of the most deserving players in this team.

Allardyce was astute in poaching Diamé on a free transfer from Wigan last summer, and the Frenchmen just about pips West Brom’s Youssouf Mulumbu to claim the second midfield spot based on his fantastic performances in the bigger matches.  The importance of physically imposing dynamic midfielders has again been discussed in detail on this blog, and Diamé’s rising prominence this season is a credit to that assertion.  He individually inspired West Ham to seize an impressive comeback against Chelsea earlier this year, and it is no surprise that Arsenal have been contemplating a bid for him to replace Abou Diaby.  With a minimum-fee release clause of just £3.5m, the midfield monster would arguably be a shrewd purchase for any premier league team.

An inconsistent player who showed huge potential initially with Celtic, Maloney has finally come good in the Premier League following a lackluster stint with Aston Villa.  Fielded mostly on the left for Wigan this season (but skillful enough to be deployed as a no.10, such as in the FA cup Final against Man City), Maloney is a fine passer and has an eye for threading through some excellent through balls.  A return of 5 goals and 8 assists has been vital for Wigan’s mediocre campaign this season, and it is unlikely the Scotsman will sit in the Championship next season should the Latics be relegated.  His equalising free kick against QPR last month was a sign of his quality from dead ball situations.

Probably the easiest player to pick, Michu has been one of the most inspiring signings in Premier League history, with Michael Laudrup picking up the deep-lying forward for just £2m from Real Valladolid.  Perhaps there was some luck here- Spurs’ Gylfi Sigurdsson was set to sign for the Swans, but the deal fell through when Brendan Rodgers departed for Liverpool last summer. Scoring 17 goals in 32 starts, Michu’s role has been interesting.  Instead of being an outright number 9 (despite his shirt number), the Spaniard has always played behind the striker as deeper lying player. It is interesting that he’s been so prolific from a more withdrawn role, and supports a small trend of deeper-lying strikers being more prolific than the outright forwards they are supporting (Sessegnon at Sunderland is another example).  An outstanding finishercoupled with intelligent intricate movement, Michu acts as a yardstick for every scouting department in Europe, and his performances nearly warranted him a place in Del Bosque’s Spain team.

A further example of Belgium’s incredible generation of players flooding into the Premier League, Benteke has not only been an outstanding finisher, but also a fantastic target man in the final third.  Having single-handedly won Villa 13 points this season (and in doing so scoring 42% of Villa’s goals), Benteke pips fellow Belgian Romelu Lukaku because of his influence in the final third.  As a designated target man (archetypal of Paul Lambert’s style), Benteke has an incredible rate of winning aerial duels, and is exceptional at bringing others into play, something that Andreas Weimann and Gabrial Agbonlahor have strongly benefited from. Don’t forget about one of England’s most prolific strikers either; Benteke has pushed Darren Bent aside with relative ease throughout this season. With Emmanuel Adebayor seemingly too inconsistent to be a genuine starter at Spurs, expect Benteke to be the subject of some intense transfer speculation this summer. 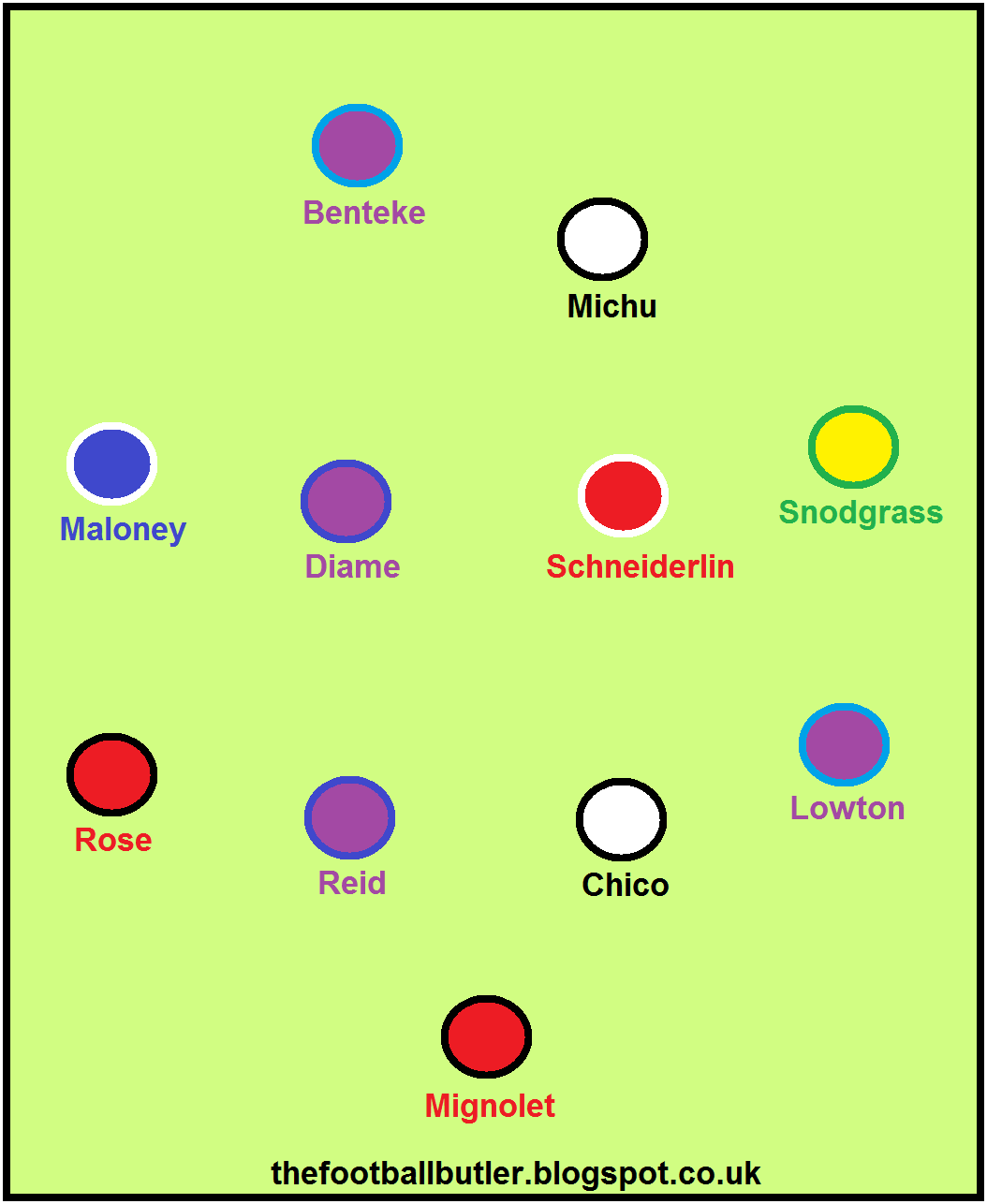 The near misses, those that didn’t make it:

Jussi Jääskeläinen– just behind Mignolet.  Impressive given his release from Bolton, which many felt spelt the end for him.

Sebastion Bassong– monumental in the Canaries’ survival, with an eye for important goals this season too.

Robert Huth– a toss up between him and Shawcross, Huth nips it. 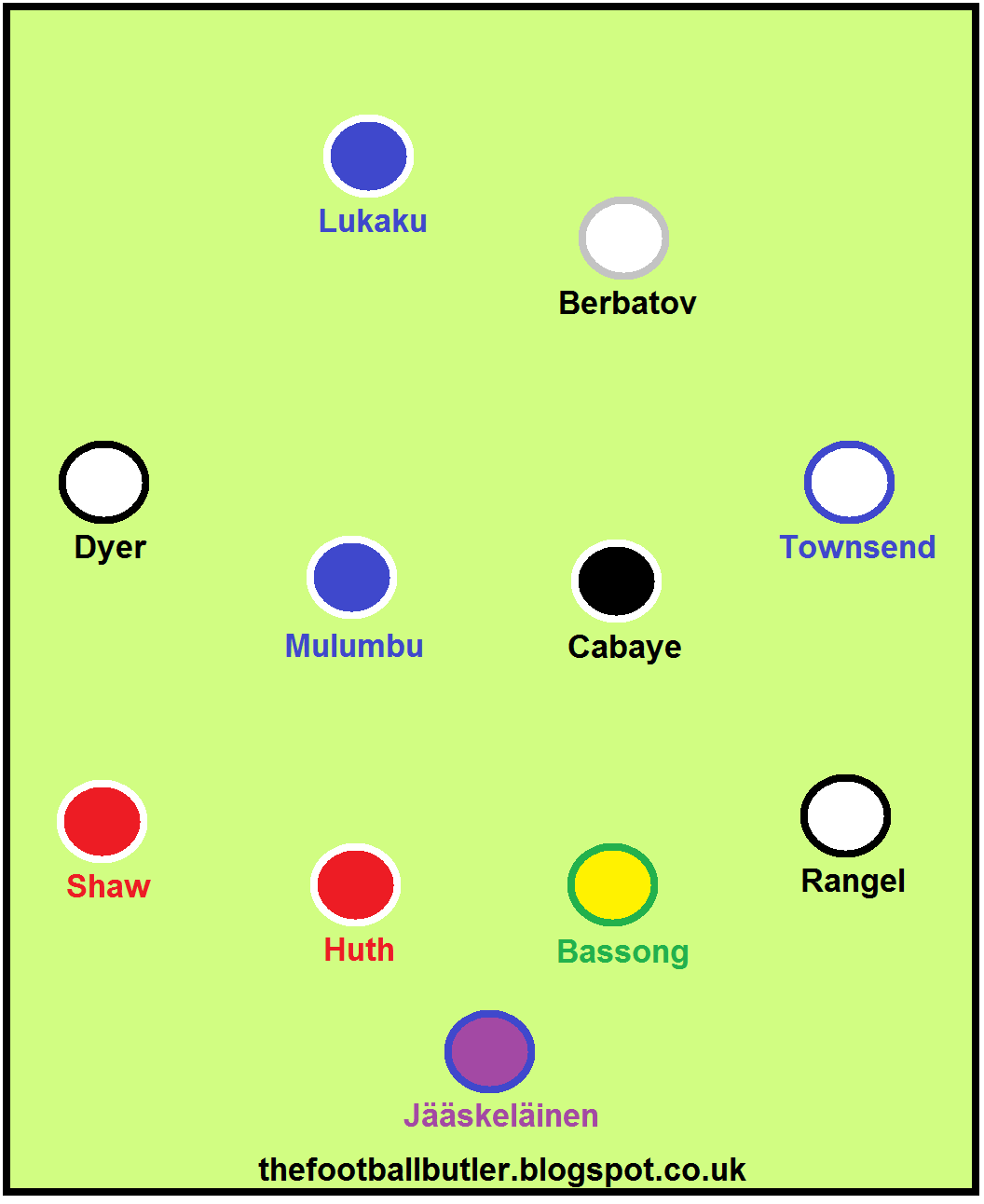 Luke Shaw- only played 21 times, but that figure is exceptional for a 17 year old (see Raheem Sterling for additional details on burning out mid season as a youngster). Perhaps the most promising talent in British football.

Andros Townsend– wonderful attacking outlet in a horrificallydisorganised QPR team, would have made the full team had he not joined in January.

Youssouf Mulumbu– fantastic at the start of the season (of top 4 quality), and instrumental in West Brom’s impressive opening to the season. Loses his place as he (like West Brom) fell away towards the end of the season,with his bizarre sending off at West Ham illustrating this.

Yohan Cabaye– not as remarkable this season, but signs of real quality on the ball remained. Perhaps somewhat stifled (like Newcastle’s season) by a rigrous fixture list balancing the demands of a Europa league campaign. Top four quality player waiting to be poached.

Nathan Dyer– like Townsend, a classic winger, capable of causing problems with his pace. His brace (not hattrick) against Bradford perhaps the highlight of the season.

Dimitar Berbatov– still a wonderfully gifted player, armed with his nonchalant playing style. Scored a cracker against Stoke, a great indicator of his effortlessly excellent technique.

Romelu Lukaku- not massively behind Benteke, and sure to finally make his mark at Chelsea next year. Him and Benteke have both scored some fantastic goals.