Following on from the same feature last year, this team will select those outstanding players not at a club in the top 7. (For clarity: that means players from Manchester City, Liverpool, Chelsea, Arsenal, Everton, Spurs and Man Utd are all ineligible for selection).

Some prerequisites: the players selected will adhere to a functional, tactically balanced formation. Essentially, that means at least one player in midfield should have a defensive nature to their game, and similarly, going forward one striker will have a deep-lying nature to their game.
David Marshall, Cardiff
(Near misses: Julian Speroni, Vito Mannone)
Arguably the outright most impressive goalkeeper of the season and unlucky not to be included in the PFA team of the year, Marshall pips Palace’s Speroni and Sunderland’s player of the season Mannone to this accolade. Frequently exposed by an awful defence (he ‘faced’ 216 shots this season, 33 more than any other keeper) Marshall has made more saves than anyone else. That, alone, is not an especially telling indicator of his performances, so it is themanner of those saves that justifies his place. Would be surprised to see him plying his trade in the Championship in August.
(Bonus: put in this performance v Barcelona at the age of 19. Has also saved a Ronaldinho penalty)
Mathieu Debuchy, Newcastle
It would have been easy to discard a Newcastle player from this based on the club’s horrific end of season form (P10, W2, L8), but before Christmas Alan Pardew was achieving impressive results. Debuchy has been named Man of the Match 6 times in 28 appearances (only Rooney and Suarez have had more), and has averaged more tackles and intercepts than any other fullback in the league. It is telling that Didier Deschamps prefers him to Arsenal’s Bacary Sagna in the France setup.
(His only goal of the season came in the Tyne-Wear derby)
Curtis Davies, Hull
Nothing should be taken away from Hull’s outstanding first season back in the top flight. Such has been born from their consistency at the back, and Davies is due specific credit for this. It was only three years ago that he was out on loan at Leicester, so it is refreshing to see his imposing, reliable, and consistent performances re-elevate his status as a top notch defender.
James Tomkins, West Ham
Picking a centre back partner for Davies was the most elusive task in finalising this team. Tomkins is picked above Damien Delaney of Palace because of West Ham’s defensive record away from home, where the Hammers conceded the 5th least of any team (25). At 191cm he’s a dominating force in the air, and suits Sam Allardyce’s organised and disciplined setup. Perhaps his technical ability can be called in to question, but considering he mainly lofts the ball into the final third from deep means this is often not exposed.
(Videos of Tomkins actually playing football this season are non-existent, so it seemed more appropriate to post a video of him getting arrested in December. Proof of some innate aggression).
Luke Shaw, Southampton

Ostensibly subject to a bid from Manchester United and on the plane to Brazil, Shaw is probably one of the most exciting young players in world football. Quick, intelligent, and powerful in possession, Shaw possess both the positional nous and attacking creativity to mature into a world class full back. He also appears to have an excellent temperament.
Jason Puncheon, Crystal Palace

An interesting character whose led an unorthodox career, Puncheon finally looks as if he’s found fertile soil at Selhurst Park. Despite his consistent knack of scoring important goals (bar this particular incident at White Hart Lane), his defensive contribution- that of maintaining a narrow, deep wide role in midfield to conform to Pulis’ resilient shape- has been excellent.
Mark Noble, West Ham

Noble as a player appears to be a slight contradiction. In open play he operates as a classic ball winning midfielder- energetic, aggressively on the front foot, quick in closing down. But he also offers an outstanding set piece contribution, a credit to his very apparent technical ability. He’s perhaps gone under the radar this season- but an integral part of Sam Allardyce’s team having started all 38 games.

Mile Jedinak, Crystal Palace
While Tony Pulis will receive much of the acclaim for Palace’s remarkable survival this season, Jedinak has been crucial in helping Pulis impose his defensive ideology. Another player who’s managed to start every game this season, Jedinak had made the second highest number of tackles (3.5) and most number of interceptions (3.7), making him like Morgan Schneiderlin in his debut season last term. It will be interesting to see how he fares in Ange Postecoglou’s Australia team at Brazil.
(This was literally the only footage of him on Youtube from this season…)
Adam Lallana, Southampton

9 goals and 6 assists from 37 starts, Lallana hasn’t exclusively nailed down a set position on Southampton’s left this year, but seeing as he’ll probably occupy this role for England at the World Cup, it makes sense to place him here. In a way, he almost represents what is wrong with the state of England’s development of young players. If an emphasis in youth academies was placed upon technical ability and not pace and power, Lallana may have emerged as an international 5 years ago (he’s 26). An untypical English winger, his ability to control, combined with a deftness of touch and tactical awareness, is outstanding. Perhaps the most deserving player in this team.

Rickie Lambert, Southampton
Lambert’s career path defies all stereotypes. He didn’t get his big ‘break’ until he was 27, having flaunted around in the depths of the football league with a plethora of clubs. Now, at 32, he’s displaced a young English player who’s had £50m invested in him on the plane to Brazil (Andy Carroll), and looks perfectly suited to the top of English football. Other than being an outstanding set piece taker (34/34 penalties, majestic free kicks), it is telling that a player labelled as a tall target man has had the fluency to slot into Mauricio Pochettino’s dynamic, short-passing, high pressing game plan with assumed ease. He suits the secondary striker role of this team because of his general contribution to open play this year; on top of his 13 goals, he has also assisted 10, the third highest in the league. His video below is outstanding.
Wilfried Bony, Swansea
Physically imposing and shrewd in front of goal, Bony appears the standout in what has otherwise been a largely mediocre season for the Swans. Still, you could make a case for him being the strongest aerial player in the league, and he allowed (initially) Michael Laudrup to revert to a more pragmatic approach at the start of the season. Started quite slowly but really came into his own in more recent times (5 goals in the final 3 matches), Bony could become quite a presence next season. Whether he’ll displace Didier Drogba in the Ivory Coast team is unlikely, but Brazil may be the foundation for him to really announce himself as a top quality player. 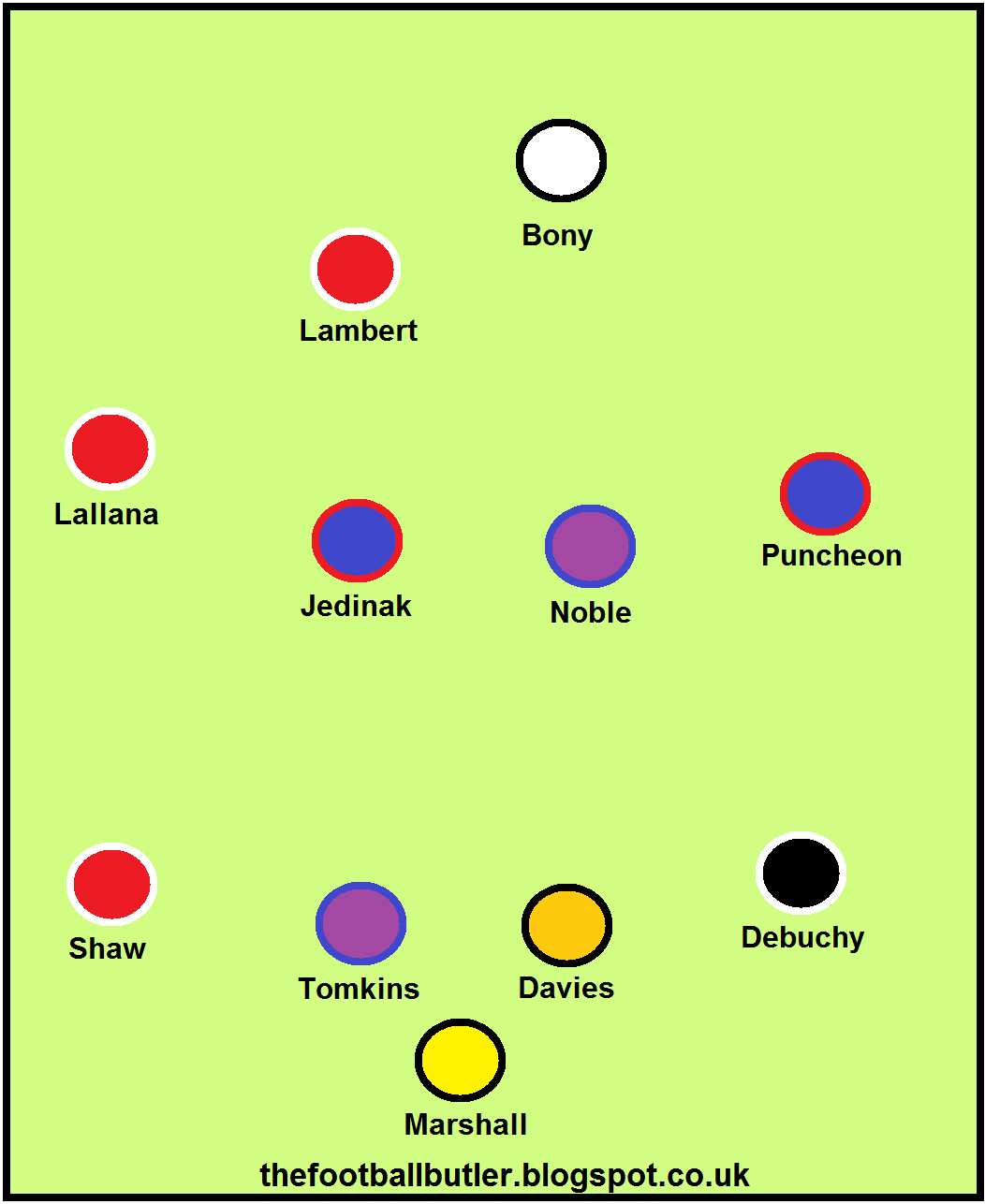 Those who fell short:
Julian Speroni: Resisted Pulis’ pressure in the form of the £3m acquisition of Wayne Hennessey in January and built upon his club-legend status.
Nathaniel Clyne: Another excellent Southampton player, not far behind Debuchy at all.
Gareth McAuley: Represents one of the core West Brom players who individually maintained their high standards, despite a desperately mediocre campaign. While he, Youseff Mulumbu and Claudio Yacob stay fit, the Baggies will always have a chance of maintaining their top flight status.
Damien Delaney: 37 appearances in his debut season, and refreshing to see an overly experienced championship player both trusted and performing upon their promotion.
Martin Olsson: Norwich’s most consistent player this season. Excellent defensively, and second in their player of the year award (well, technically third if you include 3rd team goalkepper’s Marco Nash’s ‘win’).
Robert Snodgrass: Norwich’s best player on his day and Scottish player of the year. Didn’t turn up properly for the Canaries until March, which explains his exclusion from the main XI. 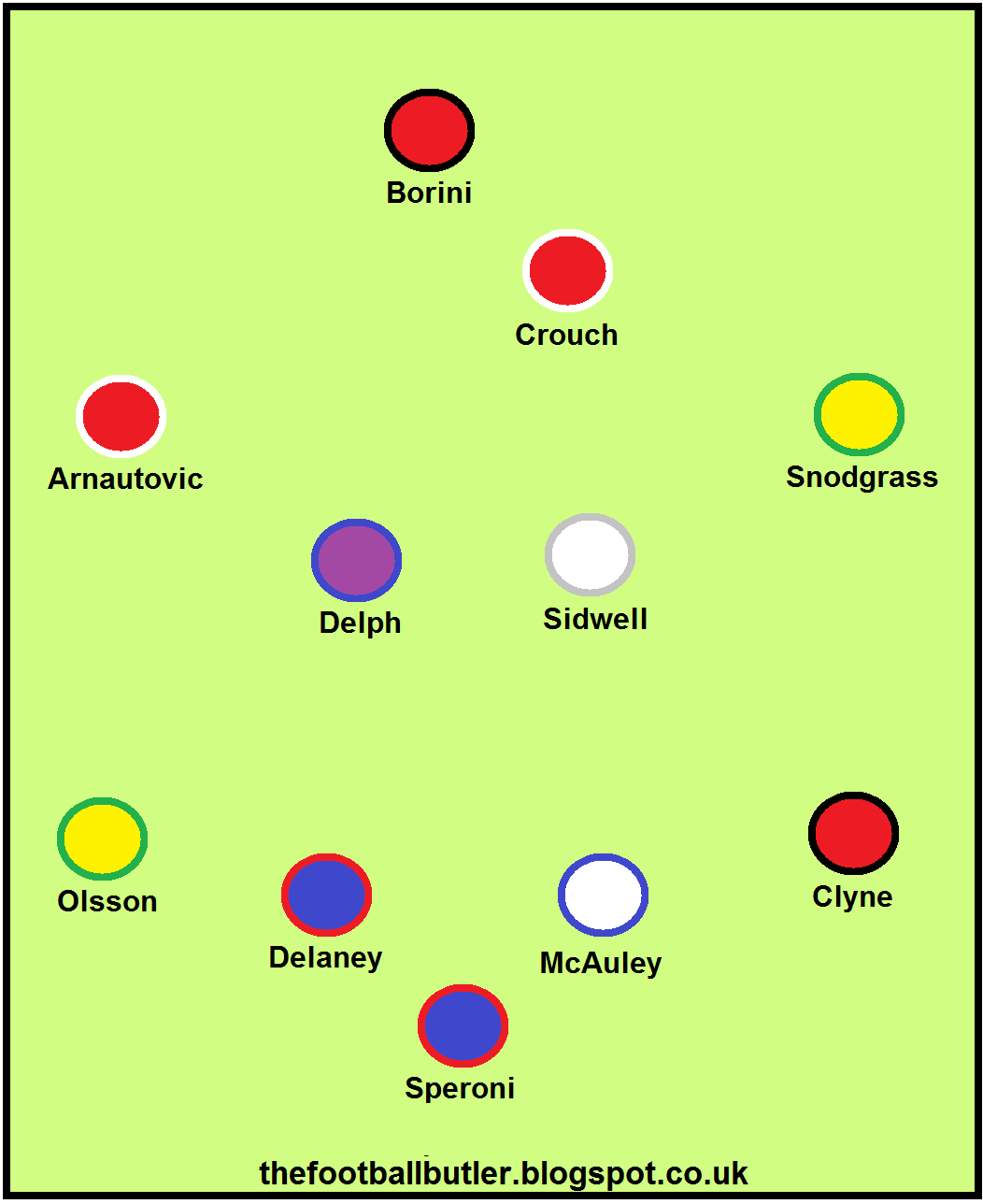 Steve Sidwell: A rare breed of life in an otherwise a dire season for Fulham. 7 goals and 6 man-of-the-matches impressive for a midfielder unheralded for their attacking quality.
Fabian Delph: Just behind Mark Noble and absolutely outstanding at the start of the season. Dynamic, combative and full of flair on the break. Wouldn’t be surprised to see him eventually break into the England team.
Morgan Arnautovic: The supposed embodyment of a new attacking age at Stoke. Quick, elegant and versatile across the attacking midfield zone. 7 assists is an impressive return.
Peter Crouch: 8 goals, 5 assists, and 5 man-of-the-matches; another under-the-radar performance this season but Crouch has not declined like many might have assumed. Despite his lack of strength, he still manages to be a handful for opposition defences.
Fabio Borini: Eyebrows were raised when he was loaned out to Sunderland having failed to assert himself on the Anfield scene. But plenty of flair here, personal highlights include cracking goals in the Capital One Cup final and the winner in the Tyne-Wear derby.
Honorable mentions/more near misses: Vito Mannone, Marcos Alonso, Steven Caulker, Youssouf Mulumbu, Joel Ward, Ashley Williams, Jonjo Shelvey, Loic Remy, Geoff Cameron, Steven N’Zonzi, Dejan Lovren, Jose Fonte.