As the Premier League enters its last 15 games, the top two spots are almost certain to be claimed by the current holders of those positions. The remaining two Champions League spots are however up for grabs with as many as five clubs in realistic contention to grab those as they have a difference of just five points. The usual contenders have a surprising entry into that list as Southampton have defied pre-season expectations along with the loss of several first team players to these very clubs with whom they are contesting a Champions League spot.

On the other end of the spectrum, six points separate eight teams and the battle for relegation promises to go down to the wire. Bottom club Leicester City enjoyed a bright start to the season before going on a wretched 13 match winless run from late September until the Boxing Day and they find themselves with just 17 points after 23 games.

Keeping the January transfer market activity in mind along with the set of the fixtures awaiting the teams till the end of the season, we try to predict the top four as well the clubs that are doomed to drop down to the Championship next season.

From the very beginning, only two teams have staked their claims for the best team in England. Chelsea looked to blow away any team that they met and managed to take an eight point lead at the top of the table at one point before Manchester City cut that down at the turn of the year. Manchester City have twice overhauled significant deficits at the top of the table in the past three years and will fight tooth and nail this season as well. Both teams have strengthened in attack over the winter transfer window with the addition of Juan Cuadrado and Wilfried Bony respectively. However, Chelsea have a relatively easier fixture list to contend with and Manchester City’s midfield woes along with Sergio Aguero’s fitness issues will prove telling come the end of the season.

Verdict: Chelsea to win the league, albeit Manchester City running them very close.

This season has all the makings of being one in which 67-68 points will be enough for the 4th and final Champions League place and Manchester United lead the pack with 43 points. However, they have to visit the likes of West Ham, Swansea, Newcastle, Liverpool, Chelsea, Everton and Palace before finishing the season away at Hull City and will host Tottenham, Manchester City and Arsenal in their final 15 games. Those are at least 10 tough games, and Luis van Gaal’s side haven’t yet put in enough convincing displays against the top sides to be sure of a top four berth as they have relied largely on the some remarkable goalkeeping displays by David de Gea.

Southampton have defied pre-season predictions of being relegation candidates in remarkable fashion featuring in the top three positions for most of the season. Currently 4th, level with Arsenal on points and just one off Manchester United in third, they have beaten the duo since the turn of the year. The signings of Elia Eljero and Filip Djuricic will give them a significant boost to challenge for European places and they are bound to finish in the top seven with West Ham falling away from the pack in recent times. Ronald Koeman’s men will be there or thereabouts come the end of the season because on paper, they don’t have to navigate past too many tough fixtures as away games to Chelsea, Everton, Stoke and Manchester City present the only real threat. Home games against Liverpool and Spurs though ultimately might prove decisive. 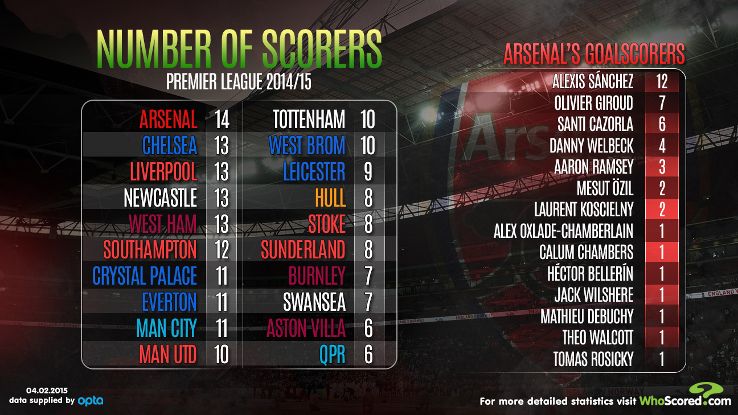 Having made their worst start to the season in 32 years, the Gunners have recovered with an impressive 12 wins out of their last 15 matches in all competitions. They have signed Gabriel Paulista to bolster their defence and Francis Coquelin has emerged as a capable defensive midfielder. The likes of Mesut Ozil and Theo Walcott have made impressive returns from injury and Arsenal seem to have the most balanced squad of the lot by far. They also have the highest number of goalscorers in the league which shows that they aren’t a one-man team, as many pundits have made them out to be.

Their next eight matches will be played in London before the return leg of the Champions League round of 16 in Monaco. The impressive 2-0 win away at the Etihad proved that Arsenal can get the job done in big away games while the recent 5-0 win over Aston Villa without their star player Alexis Sanchez displayed the attacking talent they possess in droves. Arsenal have the easiest set of fixtures by far: away at Spurs, Palace and United and home to Liverpool and Chelsea being the only standout fixtures and they should qualify for the top four easily.

Not unlike their North London rivals, Tottenham underwent a rough start to the season which saw Mauricio Pochettino’s job put under tremendous pressure. They have however turned things around drastically and are just two points off Arsenal and Southampton. The performances of Christian Eriksen and Harry Kane have propelled Spurs though they have a very tough month ahead of them. Trips to Anfield, Florence (Europa League) and Stamford Bridge along with the North London derby are on the horizon while tough away games at Manchester United, Newcastle United, Southampton, Stoke and Everton will have to be dealt with if they are to maintain their tilt for a top four position.

Liverpool, the in-form side of the league who have won 16 out of their last 18 points having won just 22 out of the 51 available previously, are on track to put up a massive challenge for the 4th place having recovered from their own worst start to a league campaign for 50 years. Most of the summer signings seem to be bedding in nicely in Brendan Rodgers’ refreshing 3-4-2-1 formation that seems to have brought out the best of a number of players. In their last eight games, they haven’t conceded a goal from open play in all competitions and the goalscoring return from a five month injury absence by Daniel Sturridge has only lifted the spirits in the camp higher. Home games against Tottenham and Manchester United could be pivotal while a trip to the St Mary’s is a ‘must not lose’ at the bare minimum. The top four is within the reach, and Liverpool are showing all the signs of achieving it.

Verdict: Arsenal to claim the third spot comfortably while Liverpool boosted by the returning Sturridge edging out the remaining teams for the fourth spot.