Defending Champions Spain take on Louis Van Gaal’s Netherlands in both the side’s first game of the tournament that promises to be an exhilarating encounter.  In what is labeled as one of the standout ties of the showpiece event at the Arena Fonte Nova in Salvador, Vicente Del Bosque’s side would be looking to kickstart their tournament with a bang. However, new Manchester United manager Louis van Gaal’s tactical nous and the Oranje’s tactically flexible setup and the discipline off the ball will make it hard for the La Furia Roja.The defending Champions are expected to start off with a win and we here at Soccersouls provide our readers with Spain’s strongest possible eleven to take on the Dutch.

Iker Casillas would in all probability be playing his last major tournament for his country. The Real Madrid legend would surely love to go out with a bang but the 33 year old will be a busy man under the sticks as Netherlands will start with two strikers up front in Robin Van Persie and Klaas Jan Huntellar. The Spanish defense have wilted under pressure in the past and Casillas in particular would want to avoid a repeat of last edition’s shock loss to Switzerland in the opening game of the tournament.

Del Bosque has a tough selection headache with both Cesar Azpilicueta and Juanfran capable of playing in the right back slot for the Spanish Armanda. The Chelsea defender is expected to start while Barcelona’s Jordi Alba will draft in as the left back position. The central defensive Barcelona-Real Madrid pair of Gerrard Pique and Sergio Ramos will have to make sure that they keep Van Persie and Huntellar quiet for the entire duration, not allowing them an inch of space to deal with. Both the strikers have enough ammunition to cause wreak havoc in the back line and Van Gaal has emphasized who one striker can play off the other to drag defenders out of position and cause the defense a lot of trouble specially through cutbacks and overlapping wingers. 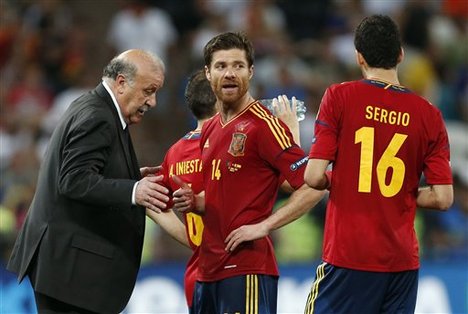 With Xabi Alonso and Sergio Busquets holding fort as the double pivot, the triumvirate of David Silva, Xavi and Iniesta are expected to run the show. It might appear Spain are lining up in a 4-2-3-1 but that effectively turns to a more 4-3-3 approach off the ball as Iniesta will drift wide to accommodate Xavi as the playmaker role while Silva will look to cut inside from the flanks. The possession based approach will allow the likes of Alba and Azpilicueta to overlap countering the Neherlands’ five man midfield to recycle possession and keep a compact shape off the ball.

Atletico Madrid striker Diego Costa who is set to be a Chelsea player soon, is expected to lead the line on his own. Costa’s immense work rate coupled with the ability to hold the ball up serves Spain an entirely differently attacking outlet other than their possession based tiki taka approach. Del Bosque has the license to call both David Villa and Fernando Torres from the bench if Costa isn’t fully fit yet or he might even use new Chelsea signing Cesc Fabregas as a false nine.