Aston Villa’s last Championship fixture saw them face off against Stoke City, with the game ending as a 1-1 draw, partly due to the sheer defensive ruggedness showcased by the Potters.

They equalised with a second half goal from Albert Odomah but despite all their attacking intentions, they weren’t able to break down this stubborn Stoke City defence line. They will be looking to bounce back when visited by Derby County this weekend.

Jack Grealish’s return is the biggest piece of news for Villa fans right now, with Dean Smith accepting that the Englishman could be in line to start this crucial game against Derby County.

Both James Chester and Axel Tuanzebe have been ruled out, with the latter set to return only in the first week of March. Similarly, both Alan Hutton and Henri Lansbury are expected to miss a few weeks as well.

Tom Carroll and Jordan Lyden are out of contention for this fixture as well and there isn’t a clear timescale for the possible return of these players.

Missed the last game after picking up a concussion against West Brom and is expected to come back and replace Jed Steer.

With the recent injury to first-choice right-back Alan Hutton, expect the winger to slot into this key position for Villa.

A player who’s been in fine form since his loan spell at Hull City, expect him to keep his place in the heart of the defence in the absence of James Chester.

This Bournemouth loanee is an absolute monster at the back and has the potential to be a star for Villa in the coming weeks.

The Englishman currently on loan at Villa from Premier League club Wolves has slotted in at left-back whenever necessary. Should start this game.

The Ghanaian winger has been in decent form in recent weeks and is expected to start in his usual right-wing spot.

This veteran of the English game is 35 now but still offers a wide array of midfield propensities to the Villa ranks.

The young Scot has made 30 appearances in the league this season and is expected to keep his place in the starting XI.

The Dutch international winger is still only 23 and has a bright future ahead of him and he is set to start this key fixture against Derby.

The Englishman’s return from injury will come as a massive boost to this Villa side, who are in need of inspiration going forward.

The Chelsea loanee has been in blistering form for Villa this campaign and his attacking prowess has been a massive lift for the team this season. 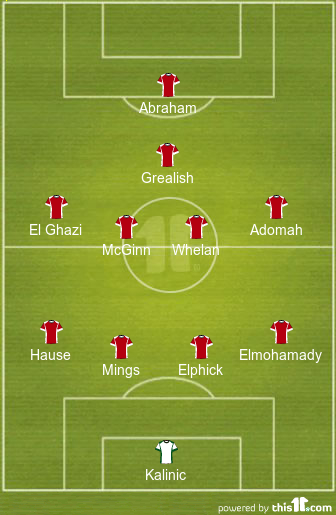