West Ham are having a relatively comfortable month, having lost just one out of their last five fixtures, with that solitary defeat coming inevitably at the hands of league leaders Manchester City.

With two wins out of their last three including a clean sheet at home against Newcastle last time out, they will be hoping to keep the good run going when they travel to Wales to take on relegation-stricken Cardiff City.

The injuries faced by Manuel Pellegrini’s man have deterred their progress massively this season and summer signing Andriy Yarmolenko isn’t expected to be back in action before the end of the current season.

Other blows include the long-term knocks to Winston Reid, Jack Wilshere and Carlos Sanchez. Aaron Cresswell is also a doubt for this fixture but with his fitness currently being assessed, he could still play.

The former Arsenal man has been in inspired form this season and has singlehandedly saved West Ham multiple points this term.

A former Premier League winner with Manchester City, his experience and defensive know-how will be crucial in this fixture.

The young Frenchman has been reasonably sound at the back for the Hammers and should keep his place.

The 30-year-old is one of the more experienced campaigners in the Hammers ranks and he has to be at his best.

The direct replacement for Aaron Cresswell, the Frenchman’s immense dribbling abilities will be a big asset.

Capable of playing on either flank or even as a number 10 down the middle, Snodgrass’ versatility is a good asset to have.

The Englishman’s career has touched the lives of many West Ham fans and under Pellegrini, he remains a key member of the squad.

Another West Ham player who picked up a knock early in the season that kept him out, his return is seen as a massive gain.

The 25-year-old Brazilian has scored 8 goals and notched up a further 3 assists for Pellegrini’s Hammers side this term and should start this game.

Chicharito was preferred to the Austrian against Newcastle, which could trigger his return to the team against Cardiff. 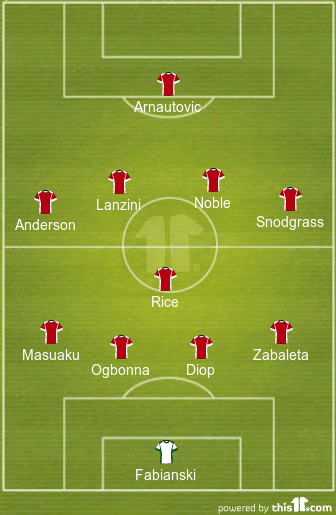